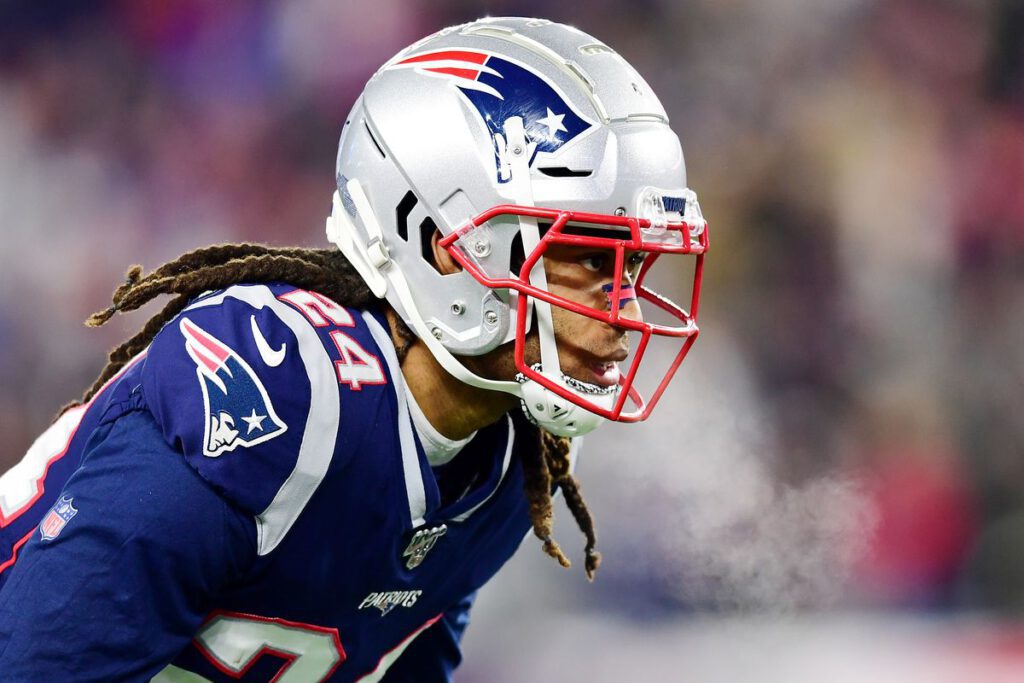 The best pass defense in the NFL, until proven otherwise, resides in Foxboro, Massachusetts.

Led by Defensive Player of the Year, Stephon Gilmore, the Patriots led the league in just about every statistical category against the pass from passer rating (62.8) to interceptions (25) in 2019.

New England’s shutdown pass defense starts with playing the second-most snaps in man coverage in 2019, which is only possible if you have skilled corners that are up to the task.

For instance, according to USA Today’s Doug Farrar, only Matt Patricia’s Lions played more snaps in man coverage than the Pats last season, but they didn’t perform nearly as well.

Detroit allowed 23 touchdowns to just three interceptions in man coverage, while the Patriots allowed ten TDs to a whopping 18 interceptions mainly due to a huge talent gap at corner.

Everything for New England in the secondary starts with Cover 1, which according to Alabama head coach and longtime Belichick confidante, Nick Saban, is the “best coverage in ball.”

Saban says Cover 1 is the best coverage in football because it puts an extra defender in the box to stop the run and defend passes to the middle of the field, forcing challenging throws outside the numbers.

Based on his actions, it appears that Belichick agrees with his former defensive coordinator.

The 2019 Patriots defense led the NFL in Cover 1 usage and had the league’s best pass defense when playing Cover 1, allowing -0.39 EPA per attempt.

In past iterations of our roster breakdown series, we broke down New England’s Cover 1 rules, and divider leverage principles, but here’s a quick tutorial on how the system works.

The Patriots’ Cover 1 defense structure puts a deep safety, usually 15 yards off the line, in the middle of the field and a “rat” defender in the intermediate area or at the sticks.

The imaginary line on the field, referred to as a divider, tells the man defenders what technique to play based on if he has help to the middle of the field and where the ball is before the snap.

Here’s a great example of divider leverage at work with Stephon Gilmore matched up against Odell Beckham, Jr. at the bottom of the screen. When Beckham takes an inside release, Gilmore plays outside shade and in a trail technique, knowing he has inside help from the deep safety. Beckham throws a fake at the top of his route to sell an inside break, but Gilmore doesn’t bite because if Beckham breaks it off on a post route, the safety is there. Beckham breaks out on the corner route, and Gilmore is in perfect position to take it away, forcing Baker Mayfield to throw the shorter crossing route instead.

Then, there are plays where an inside release happens, Gilmore gets into his outside shade and trail technique and undercuts the route coming across knowing he has safety help. New England led the league with six interceptions on crossing routes because of plays like these.

Although the scheme is sound, it takes tremendous man coverage corners to shut down throws outside the numbers and make plays on the ball against inside breaks.

Plus, there needs to be excellent trust and discipline from the entire defensive backfield to stick to their rules.

The Patriots have a combination of talent and discipline in their secondary, which is why they’re so successful in man coverage.

Gilmore makes New England’s entire coverage system possible because of his ability to shut down the league’s best wide receivers with little help. The reigning DPOY was once again working out in the offseason with former NFL cornerback Dre Bly down in North Carolina, who has worked with Gilmore since 2017. The two drill game-specific techniques to keep Gilmore’s fundamentals sharp, and it’s hard to argue with the results. The Pats cornerback is the best man coverage corner in football, sporting an opposing QBR of 34.1 into his man coverage. Gilmore’s combination of elite size, athleticism, route recognition, hand usage and eye discipline, ball skills, and patience at the line makes him the perfect corner for Belichick. The toughest thing for Gilmore now will be maintaining his level of play as he ages. But as Bly told CLNS Media in June, Gilmore is in that enlightened state where physical gifts meet football intelligence. Gilmore is primed for another elite year in coverage for New England in 2020.

#Patriots film: JC Jackson is balling. His 2nd INT starts at the line to force John Ross into the sideline. Gets his hands on him, limits the room Ross has to work with. Stays in the hip pocket and uses the safety rolling over the top as help, tracks the ball perfectly. pic.twitter.com/Dr8X1CA78Z

Based on the numbers, Jackson was arguably the best cornerback in the NFL last season. We know that title belongs to Gilmore, but Jackson’s physicality and ball skills are smothering opposing wideouts while Gilmore does his thing on the other side. In 2019, Jackson led all cornerbacks in QBR into his man coverage (13.3) and passer rating into his coverage overall (37.0). He’s also impossible to beat deep, picking off six passes to only three receptions allowed when targeted 20-plus yards downfield in the last two seasons. Jackson gets receivers off-schedule by redirecting them at the line of scrimmage, riding their releases, and then using his hands to feel their breaks and anticipate routes. As an outside corner, there are no major flaws in his game. The Pats will live with the penalties in exchange for sticky coverage and ball production. But teams might start taking advantage of Jackson in the slot, where his passer rating into his coverage was 76.7 compared to 17.3 on the outside. As an undrafted rookie in 2018, Jackson will be a restricted free agent next offseason. The Pats can place a tender on Jackson, and net up to a first-round pick if they decide not to match an offer sheet from another team, or sign him to a long-term extension before next year’s deadline. Jackson is one of the best bargains in football as a terrific scheme fit with only a $750k cap hit this season. But based on Belichick’s past actions with players such as Malcolm Butler and Logan Ryan, it wouldn’t surprise me if the Pats head coach is reluctant to pay Jackson long-term.

All-22 of the JMac PBU: DMac and Jon Jones both go with the crosser over the middle out of quarters coverage busting the play. JMac has the deep quarter of the field on the top. #Patriots get lucky because nobody releases into his zone. Reads the QBs eyes and makes the play. pic.twitter.com/B868Ah4rIK

The Patriots’ insane depth at cornerback continues with McCourty entering his 12th NFL season. Although he was limited by injury in the second half of 2019, McCourty’s career renaissance continues in New England, where he should’ve played alongside brother Devin his entire career. What took so long to get both McCourty’s? Jason allowed an opposing QBR of 26.2 into his man coverage last season, second among all cornerbacks behind only Jackson. Along with terrific technique and patience in man coverage, JMac is scheme versatile and alignment flexible to play both inside and outside corner. He’s just as good in zone as he is in man, which opens up the playbook, and his field awareness as we saw in Super Bowl 53 is unmatched. Both McCourty’s set terrific examples of what it means to be professional football players both on and off the field. The Patriots are lucky to have them in their locker room.

Belichick’s decision to draft Williams in the second round in 2019 was a bit of a head-scratcher given New England’s depth at cornerback. However, it’s a passing league, and Belichick knows better than most that you can never have too many good corners. We’ll see if Williams develops into a starter, and he might be in for a bit of a transition inside to guard big slots and tight ends, but he is an outside corner at the core. With William’s insane length (6-4) and size (211 pounds), the Vanderbilt product can smother release at the line and disrupt the catch point. With Jackson (RFA) and McCourty (UFA) set to be free agents next offseason, the Pats will most likely look for more opportunities to get Williams on the field in his second season to continue his development. The issue is that the depth chart is loaded at both cornerback and safety. Williams will either need to jump someone on the depth chart (not easy), move up the depth chart because of an injury, or wait his turn. There’s no easy path.

Coverage stats weren't nice to Jon Jones by the end of the season but don't let that distract from the fact that he's a heck of a player: play speed, route recognition, plays through hands, willing run defender, open field tackling. One of the best slot CBs in the game. #Patriots pic.twitter.com/tYV7pvzW1E

Outside of quarterback, slot corner might be the most challenging position to play in football, and Jones holds it down like a pro. Nickel defense is now the new base, which means slot corners often find themselves in the run fit and guarding receivers inside that have a constant two-way go with ample space to operate. Before a groin injury limited his effectiveness, Jones’s 88.7 coverage grade through the first nine weeks of the season was second-best among all cornerbacks. His play speed, strappy man coverage style, and open-field tackling abilities allow him to fly around the field every week. He can stick with the best slot receivers in the league man-to-man and is New England’s Tyreek Hill stopper. Plus, he’s a core contributor on special teams, adding four-down versatility. All of it together explains why the Patriots signed Jones to a three-year contract extension last summer. Jones’s coverage grade plummeted in the second half of the season when he allowed four touchdowns in New England’s final seven games, but we are willing to bet he’ll bounce back in a hopefully healthier 2020.

The Pats waived the undrafted free agent with an injury designation after a terrific start to his rookie camp last summer. He eventually reverted to New England’s injured reserve, and the Pats stashed the 23-year old due to their depth at the position. The 5-foot-9, 180-pound corner out New Mexico looked the part of a Patriots corner with a strappy style that challenged receivers at the top of routes with his tight man coverage. Early in camp, there was some buzz that Ross might make the team as a UDFA, but the depth at corner with a second-round pick joining the team as well was too much to overcome. Instead, Ross will give it another go in his second season. He has the talent to be on an NFL roster, but a shortened camp is working against him.