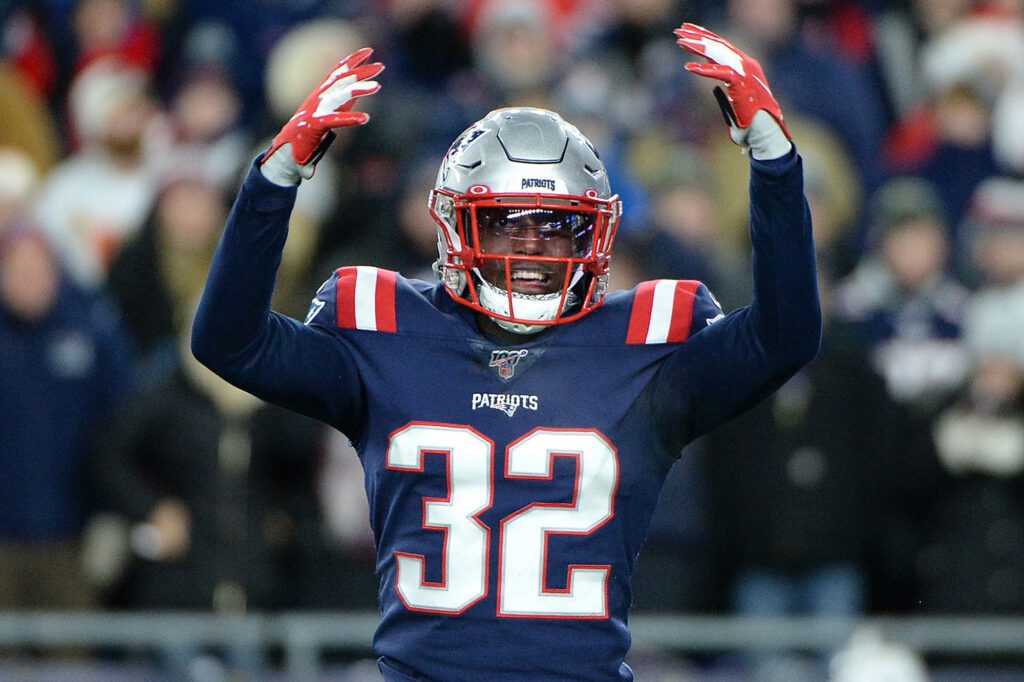 There are several ways for a player to get in Patriots head coach Bill Belichick’s doghouse, but a safety that gets beat on a deep ball is the fastest way to get on his bad side.

Belichick is a staunch believer in the “get the [expletive] back” philosophy, and that’s why he entrusts veteran safeties such as captain Devin McCourty to man the backend of his defense.

The Pats head coach is so determined to limit big plays and control the middle of the field that, before coronavirus-induced cuts and opt-outs, New England had a league-high nine safeties under contract.

The Patriots are down to six safeties on their roster, but they figure to lead the league in defensive snaps with three or more safeties on the field as they did in 2019.

Along with coverage rotations on the back end, playing with extra safeties on the field takes slower linebackers out of coverage while keeping a traditional back end structure.

In May, we wrote about Belichick’s innovations with hybrid safeties that can in the box like linebackers to guard tight ends and pass-catching running backs and track mobile QBs.

“I think you are definitely seeing a strong trend in the league towards bigger safeties that play linebacker. You see less of the big run-stopping Ted Johnson, Brandon Spikes type players,” Belichick said.

With the Pats set to face five of the top six quarterbacks in rushing yards last season, Belichick built the 2020 defense with the upcoming season in mind, adding speed to the second level.

New England will need to replace two career Patriots in Patrick Chung (opt-out) and Duron Harmon (trade) but were preparing for new faces to take over for their aging vets.

Like many other positions on the team, the Patriots’ roster turnover at safety is happening faster than initially intended with newcomers like Phillips and Dugger immediately in the mix.

But based on their skill sets, and in Phillips and Brooks’s cases, their NFL film, the Patriots are still in good shape at arguably the most important position in Belichick’s defense.

Look how far DMac comes to nearly intercept this pass. Switch release, corner route with JMac in coverage on 3 receiver side. Devin comes from the far hash to provide help over the top. Excellent read and range. #Patriots pic.twitter.com/wc9DpEkdwb

McCourty is now the “unquestioned leader” of the new-look Patriots, according to teammate Matthew Slater. Although his strong words about the NFL opt-out rules and social justice issues facing our country are top of mind for McCourty, he plans to play this season while using his platform to shed light on racial issues. McCourty deciding to play is fantastic news for the Pats, who desperately need him in every way, including his production on the field. Last season, McCourty ranked sixth in Pro Football Focus’s wins above replacement metric. The Pats captain played almost as many snaps in the box or slot (441) as he did in the usual free safety spot (467). New England will still walk McCourty up closer to the line of scrimmage to guard tight ends and backs one-on-one, and take part in their blitz packages. However, with Harmon in Detroit, McCourty’s primary role will likely be as a ballhawk in centerfield. The 32-year-old still has the speed and smooth transitions to range over the top and the route anticipation to make plays on the football. Belichick rewarded McCourty for his play last season with another two-year contract this offseason. There’s no better example both on and off the field of a perfect Patriot.

Kyle Dugger flies around the field as his combine workout would suggest. Plays like this one show you that. Ranges over from CF on the double-pass to make a play on the ball. High-point skills on display to break up the pass at the catch point. #Patriots #NFLDraft pic.twitter.com/XaIor1xScF

When the Patriots drafted the super athlete out of DII Lenoir-Rhyne, the scouts’ take on Dugger was that he’s the perfect tight end stopper in the modern NFL. Dugger impressed NFL coaches and scouts, including Belichick, during one-on-one drills against tight ends at the Senior Bowl. But his former position coach David Cole pointed out that Dugger played mostly at free safety for the Bears, where his speed and ball skills made an immediate impact after a transition from cornerback. Dugger doesn’t have much time to make the jump from DII to pro football, so his experience playing deep safety in the Harmon role might be his quickest way on the field. We’ll see in camp if Belichick thinks of Dugger as more of a Chung or a Harmon, and if he’ll give him opportunities to return punts, but the absence of both veteran safeties presents a clear path for Dugger to get on the field in year one. According to former coaches, Dugger is a quick study who was preparing during the week like a pro with the Lenoir-Rhyne staff pushing him to have an NFL mindset. He’ll need to lean on that in his rookie season, where he could be learning on the job very quickly.

Those who coached and played with the veteran safety say he’s a football savant who could play just about every position in the defense. Phillips played multiple roles and occasionally called plays for defensive coordinator Gus Bradley with the Chargers. He ranked fifth among all safeties, almost tied with Seattle’s Jamal Adams, in Pro Football Focus grade (87.6), although he only played 282 snaps due to a forearm fracture. The Patriots are hopeful that Phillips can replace Chung as a strong safety, slot defender, and pseudo-linebacker in the box. Plus, he can contribute on special teams, where he was a first-team All-Pro selection in 2018. Phillips is by far the most decorated free-agent addition for the Patriots this offseason. As we wrote in March, Belichick has a new chess piece to move around the defense to cover tight ends and track mobile quarterbacks, as he did with Lamar Jackson in the 2018 postseason.

Brooks had a breakout season defensively with the Patriots after a strong camp earned him a role as a box safety. In 280 snaps, Brooks had an impressive 70.6 run defense grade and proved to be a capable man coverage defender on tight ends and running backs. He offers a little more size in the Chung role to take on blockers in the run game and has good instincts to anticipate routes. Brooks was thought of as a special teams addition when he signed last offseason, and he was a key competent of New England’s kick coverage units, but he proved to be a useful defender as well. With Chung sitting out the season, Brooks is almost surely a lock for the Pats roster and should replace Chung’s production with Phillips while Dugger develops behind the two veterans.

Wouldn't sleep on #Patriots free-agent addition Cody Davis carving out a role as a backup free safety. Has experience playing centerfield with both LA teams. Some good reaction and range from the deep middle in these two clips. 84.6 coverage grade on 176 snaps with LAR in 2017. pic.twitter.com/W9ZMn0ypwN

Another low-cost signing by Belichick, Davis, could carve out a role as a backup free safety and special teamer. Last season, Davis only played 67 snaps for the Jaguars on defense, but he played more defensively during his five seasons with the Rams. His range as a deep zone defender is only average, but his instincts and route anticipation passed the eye test. He will also bring a downhill aggressiveness to run defense and open-field tackling on shorter throws. Davis could allow McCourty to move around the defense while Davis provides adequate post-safety help to the outside corners. Plus, he’s a former team captain and a core special teamer with the makeup of a Patriot, just like Phillips. There’s no guarantee based on his contract that Davis will make the roster, but he has the potential to replace some of Duron Harmon’s production.

Myles Bryant is a dawg. 4th and 3, smoked off the line, but beats the receiver to the spot and makes a play at the catch point. pic.twitter.com/yLRwqrqAm0

If the Patriots weren’t so deep at safety, Bryant would be an early favorite to make the roster as an undrafted rookie. The Washington product has potential as a nickel defender thanks to his physicality at the line of scrimmage and man coverage skills. Bryant is capable of mirroring receivers in press with smooth hip transitions and excellent hand-fighting at the catch point to knock away passes. He was also an impact run defender with great sideline-to-sideline hustle and physical tackling abilities. Bryant went undrafted due to his size (5-foot-8, 183 pounds) and an underwhelming athletic profile, although he performed well in agility drills as one of the three-cone leaders at the combine. Bryant’s aggressiveness and feel for the game give him a shot to make the team.