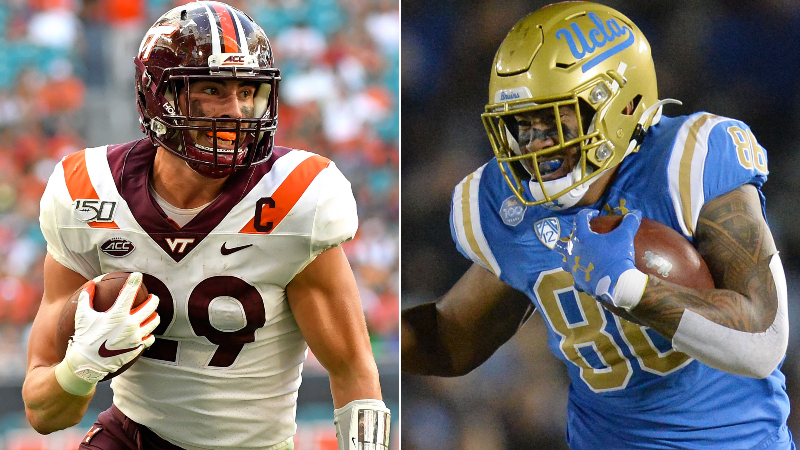 The Patriots are in a complete rebuild at tight end and fullback after several key departures at the positions over the last two seasons.

Former Patriot Rob Gronkowski is now in Tampa Bay, and without Gronk last season, the Pats were dead-last in receptions (37) and 30th in receiving yards (419) from the tight end position.

At fullback, former Pro Bowler James Develin called it a career after complications with a neck injury he suffered in 2019, while free-agent addition Dan Vitale opted-out of the season due to the pandemic.

Since 2018, only the San Francisco 49ers have used a fullback more than New England, a stylistic decision that makes it easier to double team on the line of scrimmage and read out plays for running backs.

Filling Develin’s shoes, whether its second-year pro Jakob Johnson or someone else, is important. But getting something, anything, out of the tight ends in the passing game is vital.

After veteran tight end Matt LaCosse became the eighth Patriot to opt-out of the season, the Patriots will now rely even more on draft selections Devin Asiasi and Dalton Keene in their rookie seasons.

Although LaCosse is a replaceable player, it takes away a layer of depth that could force the Patriots to either look outside the organization for a healthy body, turn to Ryan Izzo or an undrafted rookie for depth, or roll with only two pure tight ends on the roster.

The veteran tight end market doesn’t offer much excitement with 35-year-old Delanie Walker, oft-injured Jordan Reed, Charles Clay and blocking tight ends Jeff Heurman and Ed Dickson make up the best available players. Out of that group, Walker’s separation quickness at the top of his routes is intriguing in the Patriots offense, but who knows if that player still exists.

Another potential option for the Patriots could be to bring back former tight end Dwayne Allen, who last played football in 2018 for the Pats. Allen is now fully healthy and wants to play this season, according to a source close to the veteran tight end.

New England will more than likely lean on Asiasi and Keene, who will need to grow up fast without a veteran ahead of them on the depth chart, and the two 2020 third-round picks will need to buck a recent trend of rookie tight ends struggling in their first seasons.

In the last two decades, there have been 100 tight ends selected outside of the first round in the NFL Draft. Out of that large sample, the average rookie season consists of 22 catches, 245 yards, and two touchdowns. Taking it a step further, here’s the average rookie season since 2000 for 46 tight ends drafted in the third round, where the Pats took Asiasi and Keene: 15 receptions, 162 yards, one touchdown.

The Pats will take it, especially after last season’s no-show by their tight ends after Gronk’s one-year hiatus, but it’s not a position where rookies typically produce at the NFL level.

There are always outliers, and we saw two of them here in Rob Gronkowski and Aaron Herandez back in 2010. Baltimore’s Mark Andrews, 49ers All-Pro George Kittle, Los Angeles’s Hunter Henry serve as more recent examples of tight ends breaking out as rookies.

But all five of those tight ends are Pro Bowl caliber, and Gronk is a Hall of Famer while Kittle is on a Hall of Fame trajectory. Expecting Asiasi and Keene to be generational talents is lofty.

Still, the Pats rookie tight end tandem doesn’t need to produce like star players to surpass what the team got out of the position a year ago.

Asiasi stayed on the west coast this offseason, where he was working out six days a week and recently took part in throwing sessions with Cam Newton. The UCLA product broke out with 44 catches, 641 yards, and four touchdowns in his final season under Chip Kelly in 2019 as a traditional in-line tight end. Asiasi’s route-running and natural receiving skills are apparent when you turn on the tape. He’s an explosive vertical route runner that can get up the seam and work a skinny post or crosser between the numbers effectively. Asiasi also showed some nice wiggle at the top of his routes and is much better after the catch than people say. He was as a vertical threat in the middle of the field, often off of play-action, in a very similar role to what the Patriots do with their tight ends. Although his blocking technique needs work, Asiasi showed respectable power at the point of attack in his base blocks and should develop into a reliable blocker. Still, the excitement around the third-round pick stems from his pass-catching prowess. He has a chance to make an immediate impact with the Patriots.

The Virginia Tech product nicknamed “Rambo” due to his hair and beach body takes a little more projecting than Asiasi to see his fit in New England. In May, we wrote a film review on how the Patriots might incorporate their rookie tight ends. With Keene, his role at Virginia Tech was different than what he’ll do with the Pats. For starters, Keene only caught 59 passes in three seasons. Most of those were of the shorter variety or even behind the line of scrimmage. Although he has the athletic profile, Keene was the top tester among the tight ends at the NFL combine; his downfield route running is a complete work in progress and projection. Keene has tremendous upside in that regard and was a monster every time the Hokies got the ball in his hands. Plus, we discussed the Patriots potentially incorporating an H-Back into their offense instead of a traditional fullback, and that’s where Keene can help replace Develin and Vitale. The Pats rookie is a terrific blocker, who will get even better with refined technique. He can line up on the line, off the line, or in the backfield and be a factor in the run game. Keene’s contributions might not show up in the stat sheet immediately as he develops as a receiver, but he’s a versatile player that will be a fun chess piece for Josh McDaniels.

After the selections of Asiasi and Keene, it’s hard to see a scenario where everyone is healthy, and Izzo makes the 53-man roster. Based on his college tape, we expected Izzo to be a much better run blocker at the pro level than he showed last season. The Florida State product was a featured run blocker both on and off the line for the Seminoles, but he gets pushed around in the NFL. Izzo doesn’t have the athletic profile to make a significant impact as a pass-catcher, so he needs to stick on an NFL roster with his blocking, but the functional strength to hold up in the trenches is not there. In a year where depth is vital, Izzo could find his way back on the Patriots’ practice squad as an emergency tight end. Other than that, his time in Foxboro is likely over.

Berry might try to make the roster on defense as an outside linebacker, something he did early on his Ohio State career, but he’s on the Pats roster as a tight end. Berry was an effective blocking tight end for the Buckeyes with only 17 career receptions, and he was effective, especially on the move, where his athletic gifts shined as a lead blocker. Berry had a few impressive highlight-reel plays as a pass-catcher, mainly after the catch, and is a great athlete by all accounts that was potentially underutilized in an offense that didn’t feature the tight end much. On the other side of the ball, Berry could get a shot as a pass rusher with decent speed-to-power and length to push the pocket. The Pats need bodies at linebacker, so Berry might be better suited to try out for the team there.

Burt can either go as a tight end or fullback, but we’ll keep him at tight end where he played most of his snaps for Boston College. A graduate of St. John’s Prep in Danvers, Burt is a local product that finished strong in his final season with the Eagles, tallying 15 receptions, 212 yards, and a touchdown. Burt isn’t much of a pass-catcher, but he is a capable blocker, as are most BC tight ends, and was a significant part of a productive rushing attack in Chestnut Hill a year ago. The Boston College offense expects a lot out of their tight ends in the running game, and Burt was up to the task leading the way at the point of attack for his teammates. Expect him to get some run at fullback with the Patriots’ depth taking a hit there.

Although it was only four games, Johnson improved rapidly and solidified himself as a legit option to replace Develin last season. Johnson isn’t as powerful into his engagements as Develin and won’t knock people back quite the same. But he’s a little faster to the punch and more athletic to make blocks on the move. The Pats coaching staff was extremely impressed with Johnson’s ability to absorb information quickly and get up to speed in his rookie season. A fullback’s assignments are mostly straightforward, but things don’t always play out the same as they draw them up on the board. Johnson’s adaptability to post-snap movement by the defense was something that had the coaches excited. He’s now the guy in terms of traditional fullbacks.