The Patriots welcome the Jets to Foxboro this Sunday for their second matchup of the season. 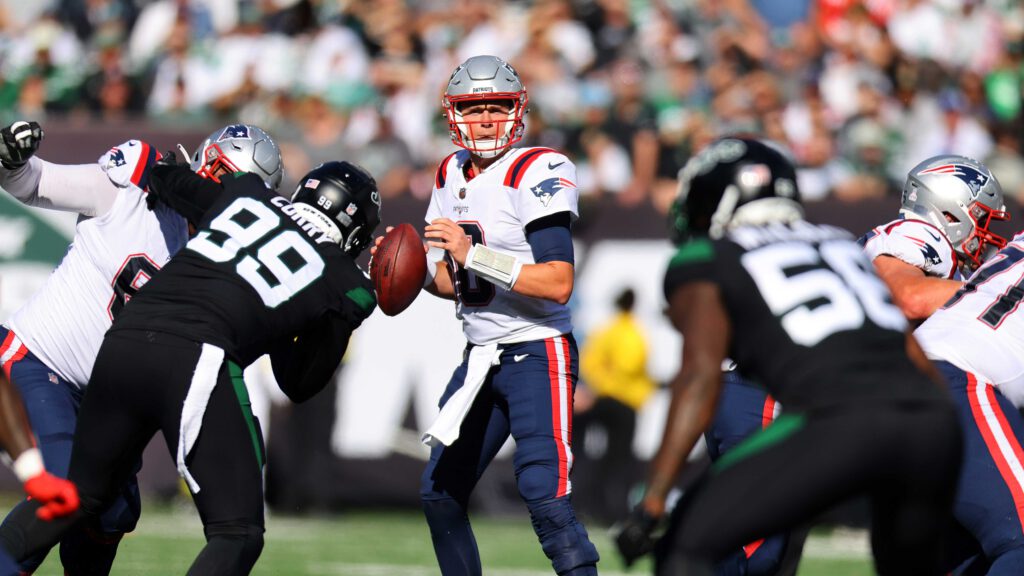 The Patriots are coming off of a much-needed week 10 bye and are set to start the second half of their season on Sunday.

They’ll do so by welcoming the New York Jets to Foxboro for their second matchup of the year. The game will kickoff from Gillette Stadium on Sunday at 1pm with Kevin Harlan and Trent Green on the call for CBS.

Here are their odds for Sunday’s game according to our exclusive wagering partners at BetOnline.ag:

These two teams faced off just three weeks ago to the tune of a 22-10 Patriots win. The Jets started the game out strong by hopping out to a 10-3 lead, but a called-back Mac Jones pick-six and a struggling Zach Wilson in the second half led to 19 consecutive New England points and a stroke in the win column.

Both teams are 1-0 since their last matchup, and are each coming off of a bye week where they saw the dominant AFC East completely switch gears. Here’s a look at the current division standings, as well as the AFC playoff picture:

As you can see, the AFC East is both a tight division and a wagon with all four teams currently holding a playoff spot. It’s going to be a tight second half of the season.

Center David Andrews is set to return to the lineup this weekend after missing the last several weeks with a concussion.

Andrews will hopefully solidify what has been an absolute disaster, and carousel along New England’s offensive line since his absence. Cole Strange has struggled, Isaiah Wynn was benched and then called upon to replace strange, and they’re on their third right tackle in as many weeks. Andrews’ return will hopefully add some stability to the entire operation.

Tyquan Thornton was a training camp darling this past summer, but a collarbone injury derailed the wide receiver’s rookie campaign.

Since returning off of IR he’s been up and down, but also hasn’t been given the touches to prove his worth. The bye week gave New England a chance to audit where they plan to go offensively, so hopefully, Thornton’s top-tier speed will be utilized more moving forward.

Another Patriots star who is coming off of injury, Christian Baremore is set to return to New England’s lineup this Sunday.

Though he’s still on the injury report as of Thursday, he’ll likely play this weekend and will add some more run-stuffing ability to their already dominant 2022 defense.

UPDATE: Barmore was placed on IR and will miss the Patriots’ next four games with a knee injury.

Much like Mac Jones, New York’s second-year quarterback has also been very up-and-down through his first two seasons.

A former BYU Cougar, Wilson is 5-1 as a starter this season but has still yet to take a second-year leap at the position – at least mentally. He has shown the talent to play in the NFL, but the Jets will struggle on offense until his decision-making becomes marginally better.

The main reason why the Jets are 6-3 this year is their fringe top-10 run defense led by defensive tackle Quinnen Williams.

Williams has 7 sacks, 33 tackles, 1 forced fumble and one fumble recovery in 2022 along with 2 pass deflections and a blocked kick. New England will need to be aware of where he is at all times – especially with their struggles on the offensive line as of late.

This game will go exactly the way it did two weeks ago. The Jets will play tough for about a half, and then Zach Wilson will turn into Zach Wilson and hand the game to the Patriots.

New England moves to 6-4 and passes over the now 6-4 Jets in the tightest AFC East race we’ve ever seen.