Patriots vs Packers About More than Brady & Rodgers 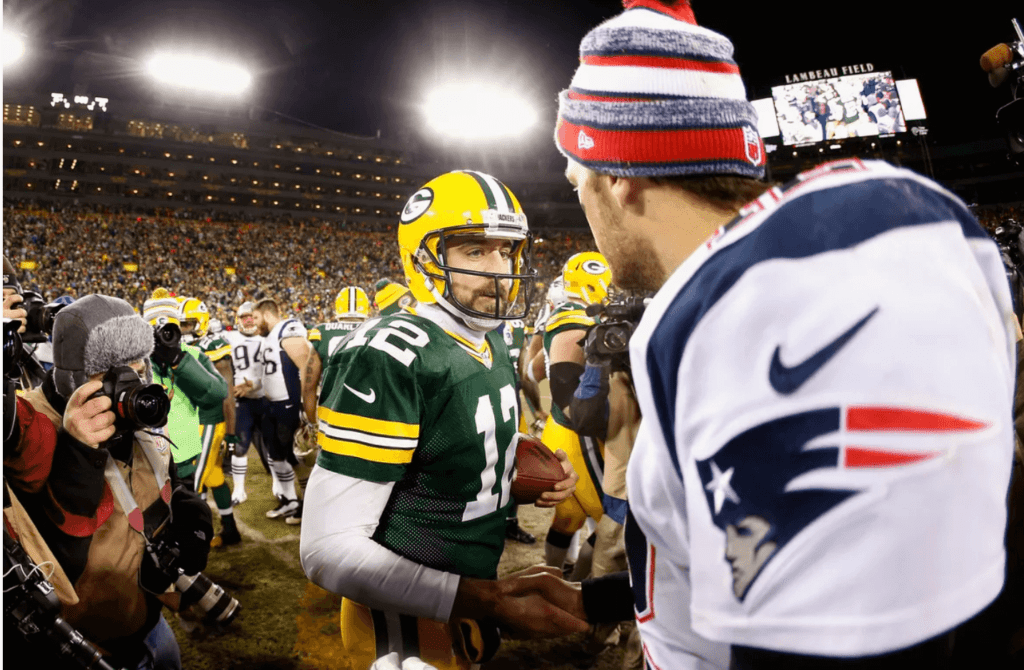 FOXBORO — The hype surrounding the matchup between the Packers and Patriots is all about Aaron Rodgers versus Tom Brady.

Except neither quarterback will face one another head-to-head on the field Sunday night.

“That’s never been. Obviously, I’m leading my offense, he’s leading his offense, but my focus on my film study is on their defense and thinking about how their coaching staff is going to try to take away what we do best like they always do,” the Packers quarterback said of the individual battle between himself and Tom Brady. “That’s kind of where the focus is. Obviously, the me and Tom stuff is for media fodder, and it’s to obviously get people to tune in.”

For Brady, the matchup won’t be with Rodgers, but against Packers defensive coordinator Mike Pettine and the Green Bay defense.

Pettine’s defense ought to look familiar to the Patriots coaches and Brady.

“Absolutely, absolutely. Same stuff, and I don’t mean that negatively. I mean it as a credit to Rex and the system that he runs,” said Patriots offensive line coach Dante Scarnecchia. “Mike Pettine is obviously a disciple, and they do a lot of similar things, and they have really the same philosophy of how to pressure [the quarterback].”

At the root of the Ryan and Pettine system is an aggressive pass rush that relies on a number of exotic blitz packages to disrupt opposing offenses.

The Packers blitz on 37 percent of passing plays (fourth in NFL) and that has awakened a pass rush that ranks third in pressure percentage this season, according to Pro Football Focus.

The Green Bay defense is terrific at generating free runs at the quarterback by exposing the pass protection rules for the offense with scheme.

Below, we’ll go over some of the fronts that the Packers defense will throw at the Patriots on Sunday, and what makes them so difficult to block.

The mug front has become a common look around the NFL as the defense lines two players, usually linebackers, over the A-Gap in the middle of the defense.

This front challenges the offense to either pick up one of the linebackers with a running back or slide the protection to get one of the guards in the way of the blitzer, and it also presents an immediate threat to the quarterback up the middle.

The Packers defense often shows double A-Gap pressure, but one of the defenders will drop into coverage after the snap while they bring pressure from the perimeter.

On this first quarter sack of Rams quarterback Jared Goff, the Packers have six defenders on the line of scrimmage before the snap in a mug front. The Rams have center John Sullivan step to Martinez (#50) and running back Todd Gurley has a difficult dual-read on the play. If #35 Jermaine Whitehead blitzes then Gurley takes him, but if he doesn’t, he has to come across to pick up the blitzing corner on the strong side of the formation. Whitehead drops into coverage, and the Packers bring corner Tramon Williams from the slot. Gurley sees the corner blitz and steps across Goff to pick it up. The Packers know the protection rules and have Martinez attack Sullivan’s inside shoulder, using his momentum against him, and Martinez loops around the Rams center into the space vacated by Whitehead’s dummy rush. The inside move fools Sullivan and Martinez brings down Goff for a ten-yard loss.

There are other variations of pressure packages that Pettine will implement out of the mug front such as bringing both players through the A-Gap or a mug-stunt that cause problems for opposing offensive lines.

Shot 1 – One way to block up #Vikings Double A Gap 'Mug' look up front, sliding protection. Have seen teams use this tactic in quick game pic.twitter.com/eo8RKXEKHP

But the most common way to protect the quarterback on these designs is to slide the protection shown in the animation by the great Fran Duffy above.

Along with the mug front, Pettine also uses a series of overload blitzes that can generate free runs to the quarterback if the offense doesn’t account for them properly.

An overload blitz brings more defenders to the quarterback than the offense has in the pass protection scheme. In other words, it puts the offense in a numbers disadvantage.

On this sack by defensive tackle Kenny Clark, the Packers have five defenders threatening to rush pre-snap against four Rams blockers from the center to the right tackle. Gurley once again shades toward the immediate threat (Martinez) in the A-Gap, but Martinez drops into coverage and four defenders blitz on the right side against three blockers. Gurley has another dual-read and makes a good decision on the play to pick up former Packers safety Ha Ha Clinton-Dix on the blitz, but Clark wraps around the center similarly to how Martinez did on the play above and beats center John Sullivan for another sack.

The Packers and defensive coordinator Mike Pettine will test the Patriots’ protections in every way on Sunday night.

Green Bay has talented rushers along the defensive front in defensive tackles Kenny Clark and Mike Daniels plus edge rusher Clay Matthews, and they also added rookies Jaire Alexander and Josh Jackson at corner that are perfect fits on the backend.

On top of having talent, Pettine’s pressure schemes stress the communication and pass protection rules for the offense.

To slow down the Green Bay pass rush, the Patriots are stressing the importance of pre-snap communication and believing in their way of doing things.

Patriots center David Andrews added, “they do a lot of things that challenge you. It kind of seems like each week there’s a new wrinkle. We have to have great communication. Luckily we’ll be at home so it will be easier. But great communication and you just have to block your rules. Follow that stuff and trust your rules.”

The Packers defense has struggled at times this season and ranks 20th in Football Outsiders’ DVOA metric, but they’re a disruptive unit that has accumulated 23 sacks already this season (tied for sixth in NFL).

And as the first half against the Rams indicated, they’re a problem for even the best offenses in the NFL.