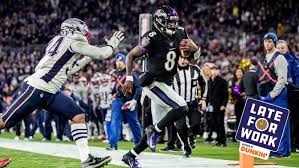 Two AFC rivals face off in week 10, as the New England Patriots prepare to battle the Baltimore Ravens on Sunday Night Football in Foxborough.  The Patriots are hoping to bring back their DPOY Cornerback in Stephon Gilmore after missing two weeks with knee ailments, as well as Wide Receiver N’keal Harry whose absence has been felt in the passing game.  The Ravens are battling injuries of their own, with All-Pro Defensive End Calais Campbell sidelined, likely along with one of the team’s dynamic Running Backs in Mark Ingram.  The Ravens will need to fill those holes in order to continue to be one of the best run stopping defenses and the best rushing offense in the NFL.

According to the sports book Betonline.ag, the Patriots enter this matchup as 7 point underdogs against the Ravens, the second largest spread of any game this week in the NFL.

The rivalry is renewed this Sunday when two teams set on different trajectories will take on each other in what was hoped to be a highly anticipated prime time game.  That is no longer the case however, with the Patriots struggling to get much momentum offensively for 4 weeks straight and the Ravens running game looking primed to dominate a depleted Patriots Linebacker core.

The Patriots come into this week coming off of their first win in 4 games, having beat the winless New York Jets thanks to a game winning field goal from Nick Folk.  Despite the Pats coming out with a win, there was not much to be excited about due to the team’s inability to defend the deep ball and their struggles to move the chains on offense in the first half.  The Ravens on the other hand, were able to pick up a convincing victory over the AFC South leading Colts.  After going down early, the Ravens defense was able to force a fumble that was returned for a touchdown and the team didn’t look back from that point.

Mark Andrews will likely be a huge focus for the Patriots secondary this week as they look to eliminate Lamar Jackson’s favorite target.  Despite Lamar’s season-long struggles throwing the ball, The Ravens boast the best rushing attack in the league by more than 10 yards.

The Patriots have struggled immensely this season against power running teams due to a lack of size, speed and depth amongst their front 7 this season.  This plays perfectly into The Ravens game plan as they will look to utilize Lamar’s incredible speed and knowledge to expose the undermanned Pats D.  Similar to the offensive attack of the 49’ers, the Ravens will run heavy sets on every down, and look to jam the football down their opponents throat until they fold.  Even two weeks ago, when the Patriots seemed to be handling the Bills offense, Buffalo switched to a heavy run offense that the Patriots simply could not slow down.

Despite the loss of Calais Campbell this week, The Ravens still have one of the best run stopping defenses in the league that could effectively keep the Patriots top 10 rushing offense to very few points.  If Cam Newton is unable to find much success in the passing game, the Patriots will struggle to put up points plain and simple.