Patriots vs. Washington Preview: Ten Players on the Bubble To Watch in the Preseason Opener 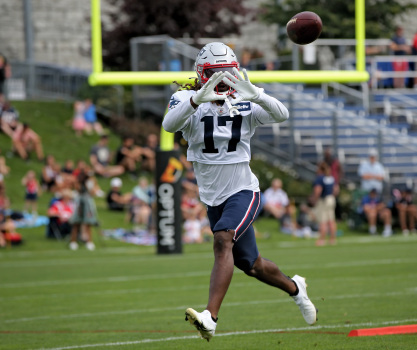 The Patriots will welcome the Washington Football Team to Gillette Stadium in their preseason opener at 7:30 pm ET on Thursday night.

After viewing 12 training camp practices for the Patriots ahead of the first preseason game, New England’s path to the 53-man roster limit is becoming clearer by the day.

With that in mind, at least ten players need to have strong showings and beyond to make the roster or are catching our eye in camp and are worth watching on Thursday night. By our count, these players are competing for roughly five open roster spots this summer.

We expect all eyes to be on quarterbacks Cam Newton and Mac Jones already, so we will highlight non-quarterbacks to preview other areas of the Patriots’ roster.

Here are ten players on the roster bubble to watch in Thursday night’s preseason opener:

The pressure is squarely on the shoulders of 2019 second-round pick Joejuan Williams. New England desperately needs one of its depth corners to step up behind Stephon Gilmore and J.C. Jackson, which hasn’t exactly happened in camp so far. Williams was supposed to be that guy to elevate to the number three outside CB spot and hopefully into the top two once the team moves away from veterans such as Jason McCourty, and eventually, Gilmore or Jackson. Well, JMac is no longer here, and there’s a golden opportunity to get on the field for Williams. Unfortunately, he hasn’t seized it in practice, routinely getting beat at the top of routes due to slow hip transitions. He has been on the losing end of several of N’Keal Harry’s notable catches in camp and needs to show out, or it might be time to move on from the 45th overall pick in the 2019 draft.

Wilkerson is the darling of Patriots camp in the first two-and-a-half weeks of practice. He had a monster second day in pads last week, including a 50-yard bomb from Cam Newton with starting cornerback Jalen Mills in coverage. Wilkerson has good burst off the line, enough shake in his releases to open up downfield, and is very efficient at the top of his routes. The 2020 undrafted rookie is also working with special teams aces Matthew Slater and Justin Bethel to hone his craft in the kicking game. If you want to talk about ceiling, Wilkerson has the potential to become an ace special teamer while also contributing on offense. Let’s see if Wilkerson can take it from the practice field to an NFL game.

In a sneak peek of my 53-man roster projection 3.0, Taylor is my last cut, or the 54th man. He can change my mind with a big night on Thursday night, but, to date, Taylor has one notable catch on a wheel route in 7-on-7 so far in camp. He is not breaking out in the way that we all expected in practice. The Pats have five running backs that are roster locks ahead of him, and Taylor is currently working with the scout-team offense. Carrying six running backs on the active roster is a huge number, which means Taylor is fighting for a spot. Running backs coach Ivan Fears told the media that Taylor flashes more in games than at practice. Well, now is the time for a coming-out party both as a running back and returner.

In another sneak peek of my roster projection, Davis currently makes the team. Patriots head coach Bill Belichick called the 6-5, 320-pound defensive tackle a system fit and applauded him for a good camp. Along with playing a physical brand of run defense with the length and play strength to two-gap on the interior, Davis is 4-0-2 in his six one-on-one reps this summer. He had decisive wins with a push-pull-rip move against backup center Marcus Martin and rookie Will Sherman. Davis has a strong chance of making the team because he’s rock-solid against the run, but he has decent lateral agility and hand usage to disengage as a pass rusher as well. Although all the hype is going to Wilkerson, Davis is having the best camp out of the bubble players.

We aren’t as bullish on Berry’s camp as some others, but his start to the summer was impressive before the pads came on. In those initial practices, Berry had four sacks during team drills, using a speed-to-power move. He beat up on backup tackle R.J. Prince a few times in one-on-ones but lost or tied his other reps. Berry’s path onto the roster is as a special teamer, and potentially if Chase Winovich can’t start the season on the active roster or there’s another injury. Still, you want to see how Berry does in the preseason games for a multitude of reasons. First, he has often flashed enough in practice to think of him as a dark-horse candidate to make the team. And second, all hopes of sneaking Berry on the practice squad vanish if he lights up the stat sheet in the three preseason contests. It might honestly be better for the Patriots if Berry is just okay in the preseason games, so that way they can stash him on the practice squad and elevate him if necessary on game day.

If you take away draft status, Jackson has outplayed Joejuan Williams in training camp. Neither cornerback is having a great summer, but Jackson has five pass breakups in his last three practices and is starting to flash. He has good length and downfield ball skills to challenge receivers at the catch point with enough physicality at the line of scrimmage to make up for lack of foot speed. The issue with Jackson is that he needs to get his hands on receivers, or they’ll build up speed and leave him in the dust. Jackson has a tough time sticking to receivers coming across the field and loses foot races when he’s in space. As a physical press-man corner on the boundary, Jackson can hang. There’s a good chance he’ll pop more on Thursday night than Williams.

We have a legit kicker competition on our hands, and with Nick Folk’s status for the game up in the air, it’ll be the Nordin show. Although it’s without a legit kick rush, the undrafted rookie is a perfect 14-of-14 inside Gillette Stadium during two in-stadium practices. Nordin has a boomer, no doubt about it, and he hits from 50-plus yards with plenty of room to spare. His leg power is outstanding, and Nordin is more accurate than the scouting reports suggested coming out of college. Get ready to see a huge leg, and we’ll see if he can replicate what he’s doing at practice with a live rush during a game.

Zuber was initially the in-vogue receiver to make the Pats’ roster as a speedy wideout with kick return value. However, things are pivoting now towards Wilkerson. There are no pads and minimal contact in minicamp, which allows fast guys like Zuber to shine. He hasn’t played through contact successfully yet, and the big plays in the passing game are nonexistent. Zuber’s explosiveness on kick returns and as a ball carrier on schemed touches still make him an intriguing player. But he’ll need a monster preseason performance to make a push for the 53.

To find an eighth offensive lineman worthy of making the Pats’ 53-man roster, sixth-round pick William Sherman has the best chance to make it. Why? Sherman can play both tackle and guard, which allows him to back up multiple positions. The other favorites are interior players, mainly center James Ferentz. The good news for Sherman is that he’s versatile and is only four padded practices into his NFL career. The bad news is that he’s 1-8-1 in ten reps during one-on-ones, with his lone win coming against Berry, who is also on the bubble. Sherman needs to show the coaching staff something, or they’ll be looking elsewhere for O-Line depth.

Langi had a few good moments early in camp and also played over 50 percent of the defensive snaps for the Jets last season. He was a core special teamer in New York, and with the season-ending injury to veteran Raekwon McMillan, the door is open for a reserve inside linebacker and kick-coverage specialist. New England likes Langi enough to bring him back a second time, and again, he played meaningful snaps with 60 combined tackles for the Jets a year ago. Langi is known for being a bit of a gamer, so let’s see if he balls out.