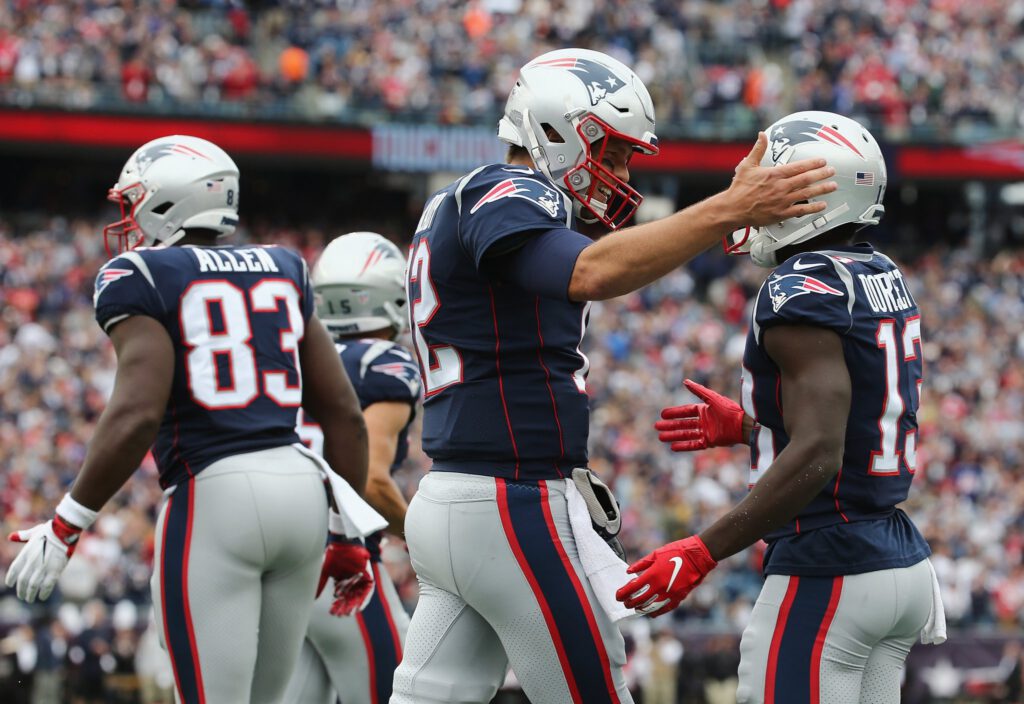 FOXBORO – As the Patriots prepare for the Jacksonville Jaguars wide receiver Phillip Dorsett went from an afterthought during his first year in New England to a vital component of the Pats’ game plan on Sunday.

Dorsett caught seven passes for 66 yards and hauled in his first touchdown pass from Tom Brady in Week 1 against the Texans.

Seven grabs in one game for Dorsett after the speedy receiver had just 12 receptions in 15 games with New England last season.

Dorsett walked me through his four-yard touchdown catch on Sunday and added some other insights about his aspirations for this season:

Let’s start with a breakdown of the play that led to a Dorsett touchdown from Tom Brady in the back of the end zone, a terrific design by offensive coordinator Josh McDaniels, as explained in great detail by former NFL quarterback Dan Orlovsky on twitter.

The Patriots isolated Rob Gronkowski at the bottom of the screen. McDaniels then motioned Dorsett across the formation into a bunch set at the top of the screen. That, along with Gronk’s alignment, told Tom Brady that the Texans were doubling Gronk and would cover the bunch set to his left with an inside-out coverage. McDaniels then had Chris Hogan run an outside breaking route towards the sideline while Dorsett released vertically toward the back of the end zone, forcing the outside corner to take Hogan despite Hogan starting as the inside receiver in the slot. That gave Dorsett outside leverage on the play with the cornerback playing inside of him. Brady made a quick read and delivered the pass to Dorsett for the touchdown.

“Ya, it was a great play. We knew what we were going to get down there,” Dorsett said.

“All I had to do was make the right decision [go in or out at the top of the route]. I knew Tom was going to make the throw. I was one-on-one with the corner, and I just needed to make a good move to get open,” said the Pats wideout.

Following up on McDaniels’ foresight to give Dorsett the necessary leverage to make the play easier on the receiver, I asked Dorsett about his offensive coordinator’s ability to put players in a position to succeed.

“Josh is amazing when it comes to things like that,” Dorsett said.

“He’s always trying to figure out ways to help us succeed, and he does an amazing job at it.”

When the Patriots acquired Dorsett from Indianapolis last season, and when the Colts drafted him in the first round in 2015, the wide receiver with 4.33 speed was labeled a deep threat.

But Dorsett is out to prove this season that he’s more than just a burner on the outside.

“I work really hard to establish my identity as not just a deep threat but as a guy that can run every route, run the whole route tree. I feel like I’ve always been that type of guy but people see speed and want you to just run down the field,” Dorsett said.

The Patriots receiver then added that he doesn’t, “want to be a guy that’s just put in a box. I feel like I can run every route on the route tree and I feel like being in this offense has helped me showcase it.”

Against the Texans, Dorsett proved that he could be more than just a deep threat connecting with Tom Brady on a number of timing routes and quick hitters flashing a new found skill for route running.

The Patriots wideout remains humble and reiterated that it was only one game, but he’s on his way to becoming a go-to receiver for Tom Brady.