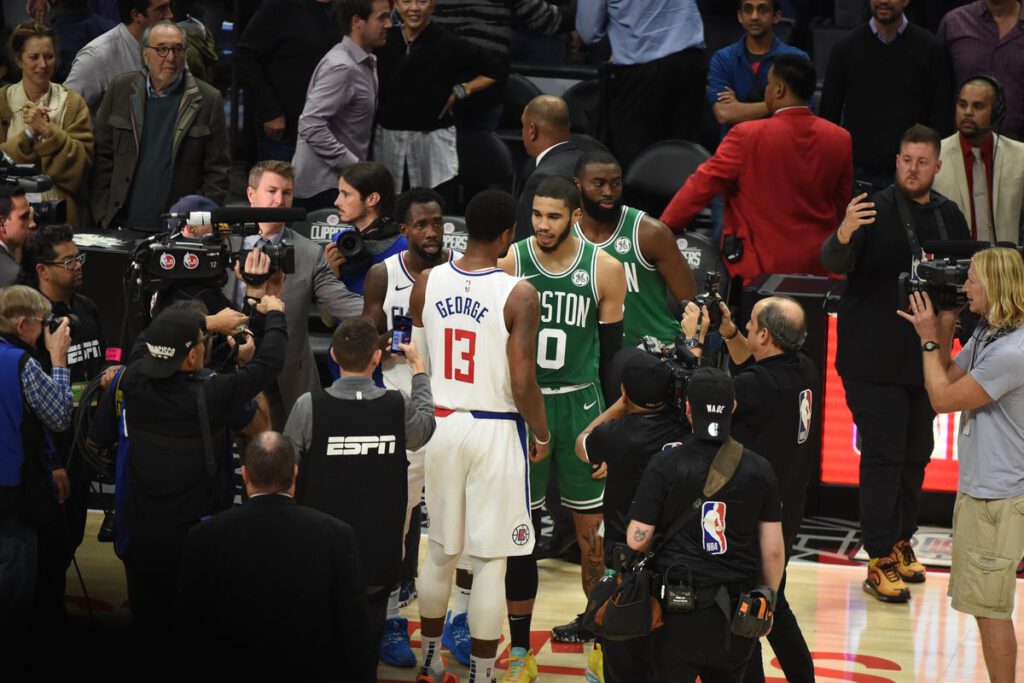 For the first time this season, Kawhi Leonard and Paul George took the floor as members of the Los Angeles Clippers.

With the Celtics in their crosshairs, one of the league’s newest dynamic duos made their long-awaited debut and while the home crowd was thrilled to see Leonard and George compete together, Jayson Tatum was determined to spoil their big night at the Staples Center.

For a rising star like Tatum, a nationally televised matchup against one of the league’s elite teams is a platform you drool over. It’s a chance to prove yourself on a grand regular-season stage and throughout the Clippers’ 107-104 overtime win, Tatum not only held his own but he made a statement.

However, the beginning wasn’t pretty for either side. Both teams barely mustered up 40 first-half points.

The Celtics shot 36 percent, connecting on only 1-of-17 of their 3-pointers but somehow carried a two-point lead (42-40) into the third quarter — where Tatum started cooking. For the second straight game, Tatum scored 14 third-quarter points, propelling the Celtics to an eight-point lead (81-73) in the fourth quarter — its biggest lead of the night.

Boston also turned its outside touch around, connecting on 9-of-17 from behind the arc in the second half after Kemba Walker found the bottom of the net from deep with 8:12 left. However, the Clippers came roaring back and only needed 90 seconds to go on a 10-0 run, one that allowed Lou Williams to score five consecutive points in 11 seconds, Clippers pulled ahead by three with 22 seconds on the game clock.

Tatum, with the game on the line, crossed George so bad that he could only watch Tatum’s game-tying 3-pointer from the ground as it fell through the net and sent the game into overtime. It was an epic career moment for the 21-year-old.

This angle is everything. Jayson Tatum is a bad, bad man. (via @celtics) pic.twitter.com/JFYkElqrUN

But the Clippers wasted no time retaliating after regulation.

Los Angeles turned a 7-2 run into a five-point lead when Patrick Beverley connected on a 3-pointer with 43.9 seconds left to play. Marcus Smart’s heads up play gave the Celtics a final chance to push the game into a second overtime when he threw a loose-ball off of the leg of Leonard as he crashed into the front row.

But Tatum’s 3-point attempt bounced off the rim before Beverley, with a foul to give, committed an intentional foul, which led to an inbound play for Kemba Walker deep in the corner that was swatted away by Leonard to end the game.

Tatum scored a game-high 30 points to go with 6 rebounds. Smart finished with 15 points, 8 assists, 2 steals, and Brad Wanamaker led the bench with 14 points and 5 assists.

Brad Stevens’ insight on the extra period in a nutshell?

“They made a lot of good plays, a few more than us,” Stevens said. “It was a really good game, it was a high-level game. Both teams really competed, even when the shots weren’t going down on both sides. We were both turning it over a bit at the end of the first half. It was still really competitive and the defense on both ends was really outstanding.”

Tatum’s game-high 30 points marked only the second time he’s ever scored 30 or more points throughout his three-year career. His performance was conducive to an All-Star caliber player who knew how to adjust his game in order to succeed.

The Clippers did a terrific job of protecting the rim and taking away Tatum’s easy layup opportunities. They also took away Tatum’s 3-point shot in the beginning — forcing the third-year Celtic to settle for contested mid-range jump shots and after finishing the half with seven points, Tatum adapted.

His first two attempts of the second half resulted in back-to-back 3-pointers and he eventually finished the frame with four. From there, it opened things up for Tatum, who was able to create space beat his defenders off the dribble and cleverly set up for open looks behind screens.

Facing off against George, it was a special night for Tatum as the two went toe-to-toe Wednesday night. For Tatum, George is a small forward he admired growing up, which made the showdown that much more special, he admitted the opportunity motivated him.

“I’ve always looked up to Kawhi and PG, especially PG, he’s one of my favorite players,” Tatum said. “This is the opportunity you look for especially (in front of) bright lights — bright stage. You don’t want to back down, you want to compete and show them that you belong out here and earn their respect. I love competing against those guys, I learn from them.”

The Celtics will close out their five-game road trip Friday night in Denver when they take on the Nuggets.