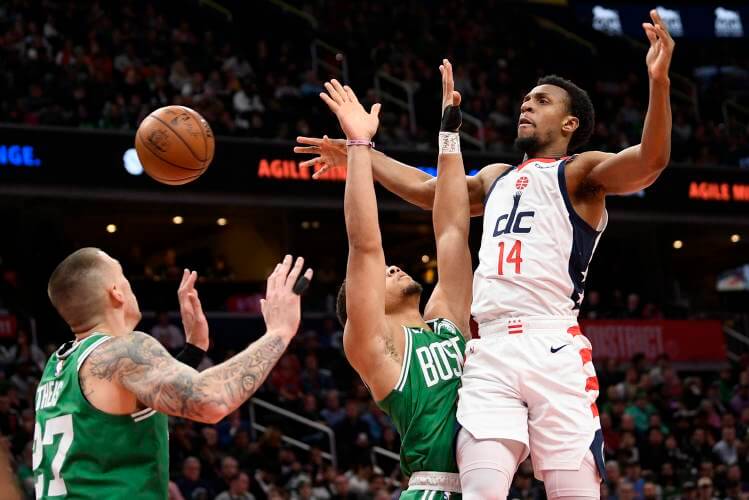 All-Star point guard Kemba Walker was sorely missed in Washington D.C. as the Celtics fell to the Wizards by the tune of 99-94 Monday night.

Without Walker, Boston mustered up less than 20 points in the opening frame for the second night in three consecutive tries. Of the three, Monday’s 17 points were not only the fewest points scored in the first quarter but it also put the Celtics in an early nine-point hole.

Boston never crawled out. Slow starts without the Celtics’ All-Star point guard is slowly becoming a pattern. Walker, who’s been out sick since the start of the calendar year, impacts the game in various ways, specifically in the first half.

Although Walker’s point production regularly picks up in the latter quarters, his ability to control the pace along with his team’s spacing on offense early on has affected opposing teams’ defensive approach. Washington’s offense attacked early and often; Ish Smith, Isaiah Thomas, and Jordan McRae combined for 33 of the Wizards’ 51 first-half points as the Wizards took an 11-point lead into halftime (51-40) — the biggest gap of the night.

The Celtics’ offense looked horrible. It committed six first-quarter turnovers and shot at a 29.2 percent clip by the half and never led once.

Washington’s 2-3 zone defense caused fits throughout the game. Walker, who leads the team in scoring and assists, is a constant scoring threat from the perimeter where he can knock down jumpers and off-the-dribble when he can find his teammates for open looks or attack the basket and score. Opposing teams rarely play a zone defense against the Celtics with Walker on the floor.

Without him, the Wizards forced a fatigued Celtics team to shoot their way out of their deficit and the Celtics couldn’t find their outside touch. They finished the night shooting at a 34.7 percent clip, including 8-of-37 from behind the arc.

Playing three games in four nights can have that kind of effect on a team — lazy attempts, slow starts, a step behind on defense — however, it doesn’t excuse the Celtics from losing against a Wizards team who prior to Monday captured only its 11th win in 35 tries this season and topped Boston without two of its best players. Without John Wall and Bradley Beal, Smith lit up the Celtics for 27 points on 12-of-18 to go with his four rebounds and four assists, McRae added 19 points, 7 rebounds and Thomas added 17 points.

Brad Stevens managed to squeeze some life out of his bench from a pair of rookies in an all-hands-on-deck kind of night as every active player on the head coach’s bench clocked in at least five minutes of playing time. Tremont Waters (8 points) and Grant Williams (9 points, 6 rebounds) combined for 17 points of the second unit’s 23 points on 6-of-9 field-goal attempts along with 8 rebounds and helped pull the Celtics to within four points in the fourth quarter.

Jayson Tatum’s dunk at the final two-minute mark that followed up a lay-up by Williams sliced the Wizards’ lead down to a two-possession game (93-89). However, Gordon Hayward’s clean-looking 3-pointer from the corner clanked off the rim before Williams’ personal foul sent Anzejs Pasecniks to the free-throw line — where he drained a pair to stretch Washington’s lead out to six with only 40 seconds left to play.

No word if Walker will be available for Wednesday night’s game against the Spurs. Either way, the Celtics’ offense has to figure out a way to play at a higher level in his absence.