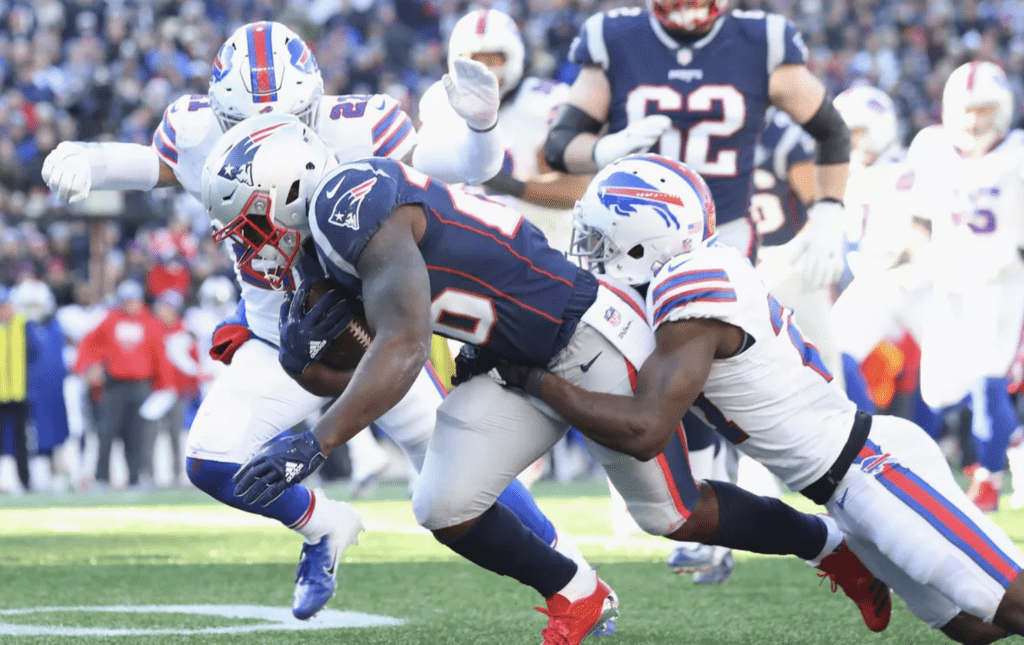 FOXBORO — If Sunday’s underwhelming performance proved anything about these Patriots, it’s that they don’t need an MVP Tom Brady to win.

The cliche has always been come playoff time in the NFL you run the ball and stop the run. The Patriots were miserable in that regard the week before against the Steelers, despite doing an outstanding job against Pittsburgh elite group of receivers. But they couldn’t stop the run when it mattered and the Patriots lost 17-10.

They also couldn’t – or wouldn’t – run the ball, despite Sony Michel and James White gashing the Steeler defense at times. The Patriots ran the ball 19 times for 96 yards, averaging over five yards a clip.

The Patriots were in an unfamiliar position: only the third-favorite to win the AFC entering Week 16. At +375, the Pats are behind both the Chiefs (+230) and Chargers (+310) per several sportsbooks we looked at which are recognized as reliable sources according these rankings. Their road to the Super Bowl looks like it will start with a Wild Card game, unless they win out and the Texans drop a game. As many in the media have pointed out lately, Tom Brady and Bill Belichick have never won a Super Bowl without a first-round bye.

But on Sunday, with Tom Brady having one of the worst halves of his career, it was the run game that carried the day. Sony Michel finished with 116 yards on 18 carries and a touchdown while the Patriots as a team ran the ball a remarkable 47 times for 273 yards to ground out a 24-12 win over the Bills at Gillette Stadium.

“Yeah, well our goal is always to move the ball and score points, so that’s what we try to do,” Bill Belichick said. “It depends on how they’re playing us and whether we can run it, throw it, whatever it is. If we can move the ball and score points, that’s a good thing. We were able to get the ball outside to the edge a few times. Then when they took that away, James [White] hit it up inside on the touchdown run there on third down. Sometimes those things are taken away and you do something else.”

Yes, the Bills are 5-10. But they also came in with the seventh-best run defense in NFL, allowing 3.99 yards per carry. On Sunday, the Patriots beat that by two yards a carry.

The Patriots had to run the ball because Tom Brady did not look like himself in the first half – at all. The end of the game in Pittsburgh seemed to carry over, as the Patriots quarterback looked like he wasn’t stepping into throws, missing open receivers and the victim of drops. He was 7-of-13 for 44 yards, an interception and a 27.7 quarterback rating just outdoing the 25.0 rating of rookie Josh Allen.

“Well, I think overall, our passing game will be better, could be better, but we ran the ball well and that offset it,” Belichick acknowledged. “Some days it’s the running game, some days it’s the passing game. We’ll see what happens next week, but I have a lot of confidence in our quarterback, our receivers, our offensive line, our protection. When we need to throw, hopefully we’ll be able to throw if we have to. If we need to run it, hopefully we’ll be able to run.”

As for Brady’s take?

“Yeah, we didn’t have our best game in the pass game, but we won,” Brady told me. “So, I think everyone’s feeling pretty good about winning.”

Many are wondering if Brady is injured and not 100 percent physically.

So, he did not have an injury when you were taken out with 6:39 to go for Brian Hoyer?

“No, I’m not injured,” Brady sneered.

Well, there’s two ways to take that. Great, he’s healthy and ready to go for the playoffs if he gets through the Jets. Or, and more of a scary thought, he IS healthy and he’s just not playing well.

“I think the offensive line, it starts with them and they did a great job today of being physical, the tight ends, receivers,” White said of the likes of Cordarrelle Patterson, Julian Edelman, Rob Gronkowski and Dwayne Allen. “It’s not easy as much as we ran the ball today to keep doing the right thing, keep being physical for that many plays, but they did it. We had a lot of rushing yards. Sony [Michel] ran hard, Rex ran hard and I tried to run hard when I got the ball. I mean, just a great team effort.”

Either way, what Sunday showed is the Patriots could rely on a running attack that at had an attitude and a run defense that was rejuvenated after struggling in road losses against the Dolphins and Steelers.

“I think that’s always the attitude for us,” James White said. “When we run the ball successfully, it opens everything else up. So, you always want to get the running game established and we had a lot of success from the beginning of the game and we just kind of kept it going. You just want to be tough and physical. And, like I said, the offensive line did a great job of setting the tone.”

The Bills had just 72 yards on the ground on 18 carries, as the defense featured the “playground” formation of one defensive lineman on several occasions.

“I think it comes a lot from us studying and us talking,” Devin McCourty said. “Studying together and then talking about different looks. Like if we get a very vanilla two-by-two or three-by-one, we’re set, but whether it’s somebody watching film on their own or watching something in meetings, guys will come like, ‘Did you see this play? What do we want to do here?’ I think that constant communication in the meeting rooms and the locker room helps us. It helps us prepare for what we might get. And then the things we’ve seen throughout the season, that experience carries over each week because we know things that have hurt us will keep coming back up no matter who we play.”

Now, another week of what the Patriots showed on Sunday and they’ll be home for a week off before the playoffs, providing more than enough motivation against the Jets on the final Sunday.

“It’s huge. I think the hard thing in the NFL is you’ve got to do it week-in and week-out,” McCourty told me. “It doesn’t just carry over if you do it one week but that’s the style we want. Bill [Belichick] always talks about a tough team is stopping the run and running the football and covering kicks. We did that today and then you add in Jules [Julian Edleman]’s big return on punt-return. Guys are really working their butts off, we’re trying to put our best foot forward each week and it’s been starting on Wednesday in practice. I think we’ve just got to continue that kind of blueprint and way we’ve been working for the rest of this year.”