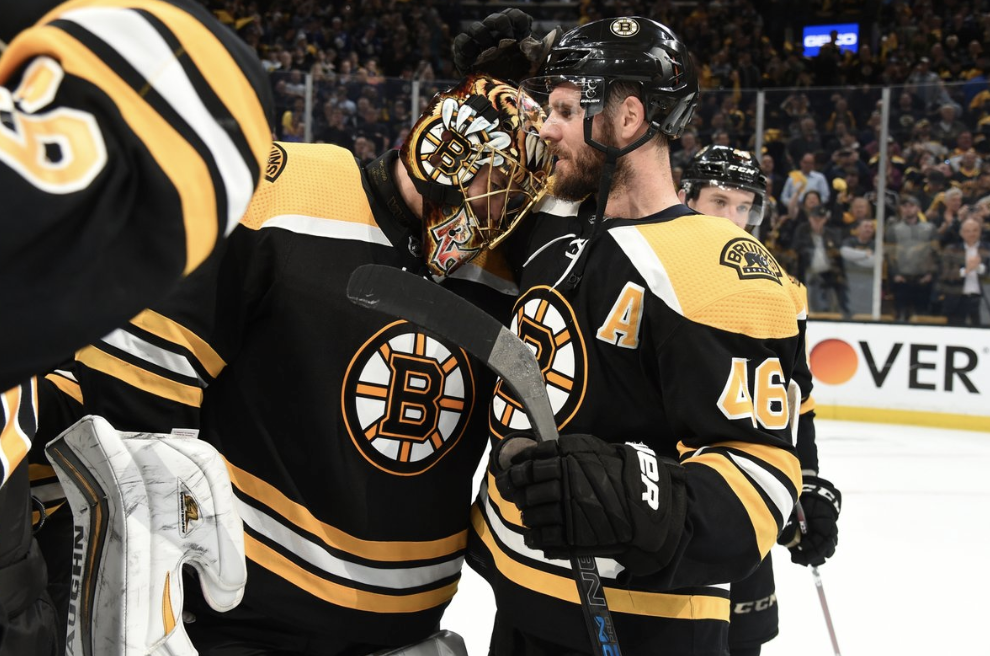 BOSTON — The Boston Bruins are now favorites to reach the Stanley Cup Finals.

And it’s not just because they have home ice advantage for the final three rounds of the playoffs, which by the way they didn’t even enjoy in 2011 in winning the Cup and 2013 when they fell in six games.

No, the reason the Bruins, who finished with 49 wins and 107 points, can be considered favorites to get back to the Stanley Cup finals for the first time since 2013 is the play of Tuukka Rask.

Tampa Bay and their 128 points in the regular season are on the golf course following a shocking 4-0 series loss to Columbus. The Calgary Flames, with 107 points like the Bruins, are out after losing to Colorado. Tampa Bay and Calgary didn’t get the goaltending the Bruins got from Tuukka Rask in the first round.

Rask was big on the road in Game 6, holding his ground on enemy ice after falling behind 1-0 in the first period. He was rock solid in a 4-2 win. Rask was even bigger in a do-or-die game Tuesday night at TD Garden.

Rask stopped 32 of 33 shots Tuesday night in Game 7 in a 5-1 win over the Maple Leafs. The lightning rod of nearly every Bruins fan looking for a scapegoat in the past five years probably won a few over Tuesday night when he stopped Mitch Marner on back-to-back shots on a mini-breakaway and turned away 14 of 15 shots during a relentless second-period barrage from a desperate Leafs team.

“We got burned with that in the last game with that and we looked at it (Tuesday) morning,” Rask said. “It’s all about guys knowing being aware where they are on the ice, kind of defending that seam-pass, I thought we did a great job with that today. It always makes goalies’ job easier when we can just play half-of-the-ice and you know where the puck is coming from.

“I think he only got that one shot on the power play the one-timer from that spot. We defended hard today. Few minutes there in the second period where we kind of gave them the momentum and some room to make plays but I thought our third period was great.”

This is Tuukka’s time to shine. He did it in 2013 in a run to the Cup Finals. Rask said after the Game 7 win that he feels he’s on track to do it again.

“I personally felt good from the start of the series,” Rask said. “I felt pretty good all year, obviously the workload hasn’t been too much so I feel fresh. It’s all about feeling confident, preparing yourself the right way, trusting your teammates. We battled hard all year and it showed again (in Game 7).”

The reason Sean Kuraly got the chance to put away the game with a goal that made it 3-1 early in the third was the play of Rask.

“Well, hopefully he’s converted a few,” coach Bruce Cassidy said. “I think in sports you have that a lot. I’m a sports fan, other sports, and I have it with certain players with teams I root for. For me, in the time I’ve known him, he’s been a very competitive man, excellent goaltender. We saw it tonight, and hopefully he can continue to build on his playoff legacy. It’s a big Game 7 win, and like I said, I believe he was our best player.

“And in the second period, we broke down. We had a tough time moving the puck out of our zone. He was there for us. Now, we ended up scoring some goals for him, right? So, that’s how our team’s done it all year. We play for one and other. We tend to pick each other up, so he picked us up in the second when we were down. We got him a couple goals in the first, so he could relax a little bit, but he made the stops he needed to and more. Like I said, I hope fans recognize what he did tonight. I think you have to as a fan acknowledge when a player plays well. I know in this town when you don’t you hear about it. That’s fine too. Tonight, he played well, and hopefully the people get behind him and acknowledge that.”