Petraglia: What The Bruins Must Do To Succeed In Game 6 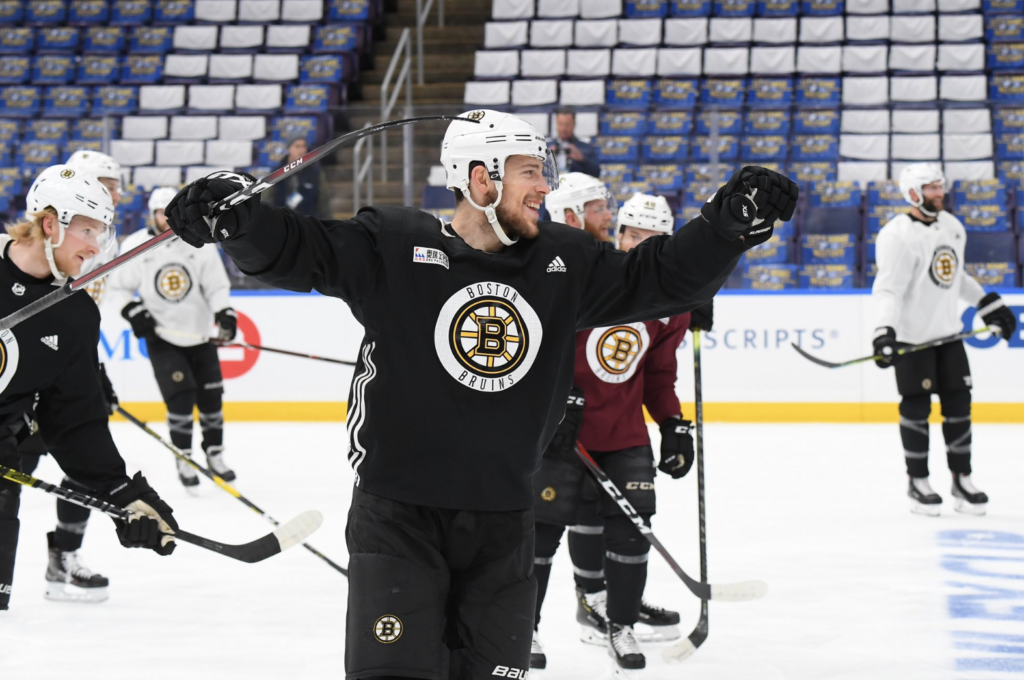 ST. LOUIS — It’s no secret that the Bruins top line has been far from perfection.

Now would be the time for Brad Marchand, Patrice Bergeron and David Pastrnak (or whoever is switched into that rotation during the game) to start dominating. When the Bruins have gone cold, it’s been the top line that’s been quieted. And the Blues, when they’ve had success in the series, have been able to keep that line in check.

It was Bergeron and Marchand who powered the Bruins back from this same deficit in the 2011 Cup final against Vancouver.

The mission this time is actually not quite as daunting as the Bruins only need to beat rookie goalie Jordan Binnington like they did in Game 3 to force a Game 7 back home in Boston Wednesday.

Binnington, for all of the well-deserved accolades he’s received from the national media, has left chance after chance for the Bruins to finish in front. The Bruins didn’t finish any one of their eight quality rebound chances in the first period of Game 5 and it came back to kill them.

For all the talk of the blown calls in that game, that’s where the Bruins really lost Game 5. Marchand, Bergeron and Pastrnak all had quality chances and couldn’t beat Binnington on any rebound. While Pastrnak has taken his share of criticism throughout the playoffs, he showed definite signs of shaking off rust in Game 5 with six shots on goal.

While there’s been criticism, The “Perfection Line” has produced more than any other on the Bruins in the playoffs, led by Brad Marchand’s eight goals and 13 assists. Bergeron (9,8) and Pastrnak (8,9) have also produced. But in the last two games, they’ve gone quiet, with Bergeron and Marchand held to an assist each and Pastrnak scoreless.

That has been a primary focus for Boston in the two off days since Thursday’s loss. And it needs to be the primary focus in Game 6.

All of this is with the understanding that both Marchand (hand) and Bergeron (lower body) are likely playing hurt.

(UPDATE Sunday 12 p.m. ET) Bruins coach Bruce Cassidy announced that Karson Kuhlman will take the place of defenseman Steve Kampfer in the lineup as the Bruins go back to 12 forwards and six defenseman, as Zdeno Chara is no longer a question mark as he was in Game 5. Matt Grzelcyk has still not been cleared for play and Chris Wagner is still out. For the Blues, Robert Thomas returns for the first time since taking a big hit from Torey Krug in Game 1 and replaces the suspended Ivan Barbashev on the Blues’ checking line.

Here are several other ways the Bruins beat the Blues in Game 6 to force the ultimate winner-take-all showdown Wednesday in Boston:

Tuukka Rask is sharp early. As much as the call wasn’t make on Tyler Bozak, the goal that followed about 10 seconds later was not one of Rask’s shining moments in the series. It was a David Perron shot/pass across the crease that went off the back of Rask’s right leg and deflected into the net. Rask is as good as we’ve ever seen on the road in Stanley Cup playoff history. That simply has to continue in Game 6 for Boston to have a prayer with the Blues on the verge of their first Cup.

Bruce Cassidy presses all the right buttons. We got a glimpse Saturday of what the Bruins coach is thinking when trying to make adjustments for Game 6. He swapped out Jake DeBrusk for Marcus Johansson on the first unit power play with the hope of possessing the puck more on the man advantage, which the Bruins figure they might have a few of Sunday after what happened in Game 5.

“[Johansson’s] a little bit more of a distributor,” said Cassidy. “Jake’s more of a net-front presence. I think they both recover pucks well. Marcus is good on entries, he’s used to having it through the neutral zone. We had a few issues there the other day, so hopefully he gives us another option.”

Bruins second and third lines wear down Blues. The Krejci and Coyle lines must apply pressure consistently, that is to say whoever is on the ice with them throughout the game must apply pressure as Cassidy will not hesitate to switch things up if Game 6 turns out to be the tight-checking game that Games 4 and 5 were.

“I think that before every game we have meetings, we talk about what we want to do, how we want to play,” said Zdeno Chara, who spoke Saturday for the first time since the jaw injury in Game 4. “I think it’s gonna be a shared responsibility between the players, coaching staff, and all of us to do the share of talking and make sure that we are where we need to be, the right mindset and preparation for the game.

“But I don’t think it’s a specific speech or player that has to do all the talking. We’ve been really good as a team the whole season. We talk before the games and just preparation as usual.”

Bruins take advantage of suspension of Ivan Barbashev for his head shot to Joakim Nordstrom. The Blues checking line has been one of the keys to St. Louis rallying in this series from deficits of 1-0 and 2-1 to the brink of the Cup in Game 6. But in Game 3, when Oskar Sundqvist was sitting out for the hit he laid on Matt Grzelcyk in Game 2, the Bruins took advantage and rolled to a 7-2 win.

Don’t Play Gloria. If the now-famous celebratory Laura Brannigan song is playing after Game 6, the Blues will be spending the summer with Lord Stanley. The Bruins are trying to avoid what happened in 1974 when an upstart Flyers franchise -desperately hoping to avoid a Game 7 back in Boston – rode a superhuman effort from the legendary Bernie Parent to a 1-0 in the Spectrum and a first Stanley Cup for Philadelphia. The Bruins do not want to turn Jordan Binnington into Bernie Parent.