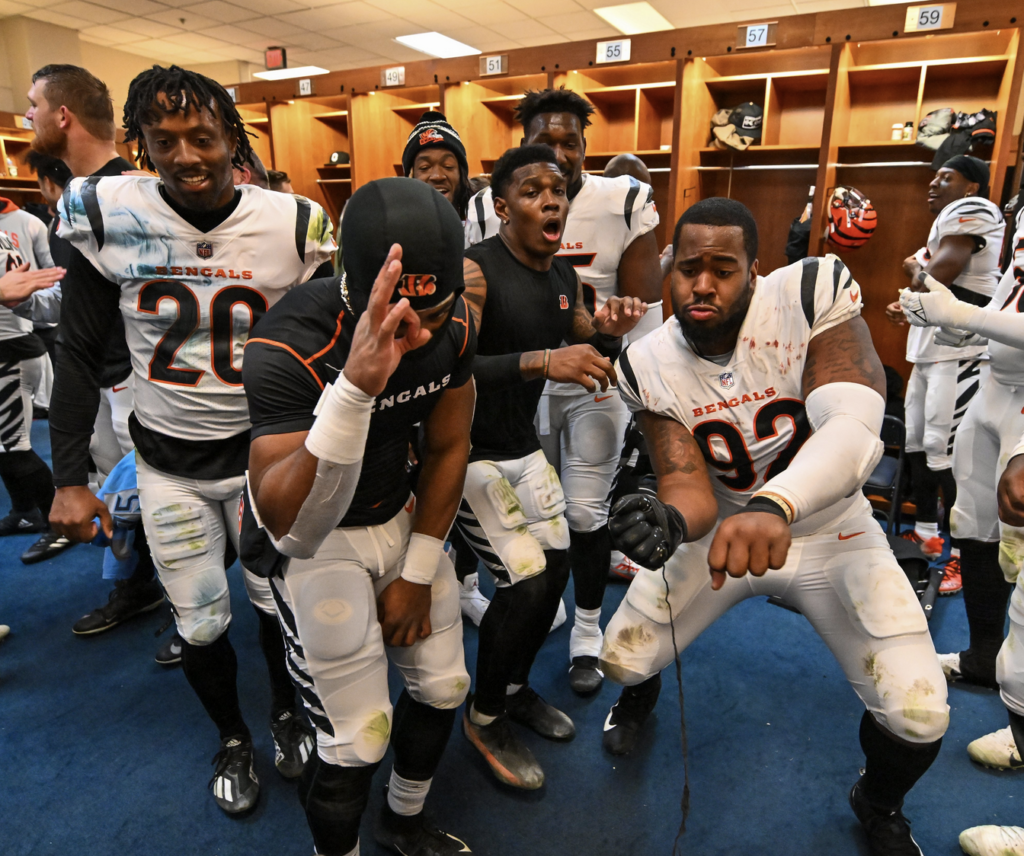 NASHVILLE — The Bengals believe they are tougher and stronger than they were last year. They believe the 0-2 start, the hiccup in Baltimore and the embarrassment in Cleveland on Halloween have made them a more resilient team capable of handling any adversity.

On Sunday, in one of the more hostile environments in the AFC, Bengals backed up those feelings with unmistakable action.

They held Derrick Henry, one of the best running backs of his generation, to 38 yards on 17 carries. They overcame an explosive 69-yard pass reception from the same Henry that set up Tennessee’s only touchdown and an early 10-3 hole.

What the Bengals showed in their 20-16 rock fight of a win at Nissan Stadium is they can stand toe-to-toe with a physical team, take a punch and then manage to be the last man standing.

They did it last January in the 19-16 walkoff that sent them to the AFC Championship. But Sunday, they didn’t need Evan McPherson at the end. They needed to just stand there as two Titans drilled Cal Adomitis to nullify McPherson’s field goal with an unsportsmanlike penalty that allowed the Bengals to kill the final 1:53 of game clock.

The Bengals heard all week that the Titans were a physical team that was going to run a healthy Derrick Henry right at them and through them. Mike Hilton and his 5-foot-10 frame wasn’t afraid. He welcomed the chance to go low on the tree of a man and cut him to the ground twice.

“I got to hit him low like I hit everybody else. He’s a physical guy, but so am I. I live for games like this and went out and proved it today,” Hilton said. “We mixed it up and kept them off-balance. Strong looks, two-high – definitely wanted to put it in (Ryan) Tannehill’s hands and, you know, good things came our way. We were able to stop the run and make them one-dimensional.

“Just get him before he gets going. Everybody knows once he’s headed downhill—as you can see on the screen (play), once he gets a head of steam, it’s hard. Once you get in the backfield and slow him down, you better your chances.”

Hilton was coming off a rematch game in Pittsburgh. He was playing with a reconfigured left pinky. That hasn’t slowed him one bit in two games.

“We got 11 starters that (are) out there willing to do whatever for each other,” Hilton told me. “We’re a tight-knit group. We love each other. You see one guy makes a play, we all celebrate.

In so many ways, this felt like January’s 19-16 win where the defense shut down the Titans defensively and won the game.

“We are who everybody thinks we are. Everybody thinks we weren’t – what did we start, 0-2? Now we turn this around,” Hilton said. “We got the guys in the locker room and the folks at the top to really lead us. We’re just taking it one game at a time. This was a big one for us, and we’re excited about the next one.”

That physical team Zac Taylor wanted to see back in September is showing up again in December. That’s what really matters.

“It’s a mindset. It’s a mindset. There’s certainly things that we focus on. You know, we were still in pads as of this Thursday, maximizing the opportunities that we get there. That’s really sending a message to the group that we’re going to continue to be physical and play physical,” Taylor said. “And again, we’ve got the right guys that know that this is a big man’s league. And you got to step up late in the year and be able to stop the run and win the line of scrimmage. And I thought our guys did a great job of that today.”

But the vibe of the Bengals runs straight through Joe Burrow. As great as the defense is and as well as it played Sunday, they needed Burrow to be Burrow with the game tied, 13-13, heading into the fourth quarter.

What does he do? He spots Trenton Irwin on a sideline out on third-and-12 and Irwin literally falls to his knees to stay in bounds and catch the 17-yarder.

Next play, Burrow connects to Tee Higgins on a jump ball for 27 yards where he beats rookie Roger McCreary for the go-ahead touchdown. Burrow was his typical Joey Brrrr self on the game-winning drive, completing 3-of-5 passes for 67 yards, including two to Tee Higgins for 51 yards.

“I think we showed how physical we were today,” Burrow said. “We ran the ball against a team that hasn’t really given up many rushing yards all year. That’s a credit to the offensive line being really physical, strong, understanding the scheme and to Samaje and Trayveon running really hard, and making the most out of whenever they get contact at two yards and fall forward for five. That’s the key.

“It is December now and this is when football counts. We are 7-4. We are in a great spot. We are happy with our continued improvement throughout the season but now it time to show what kind of championship mentality we have with this coming schedule. I know we will be ready for it.”

The Bengals have plenty of room to grow. They committed three penalties on punt returns in the first half alone Sunday. Chris Evans had a costly offensive pass interference penalty and stunted their first quarter offensive momentum and La’el Collins committed a holding penalty that wiped out a second half drive into Tennessee territory.

But the bigger takeaway Sunday is despite all of it, the Henry busted coverage on the screen pass, the special teams penalties and the road noise inside Nissan Stadium, the Bengals came out winners again.

As Taylor told his team in the celebration after, it’s not who the Bengals have to play in the final six weeks.

“They’ve got to play us,” he said with a confident tone.

Game balls for everyone!

The last six weeks should be fun.