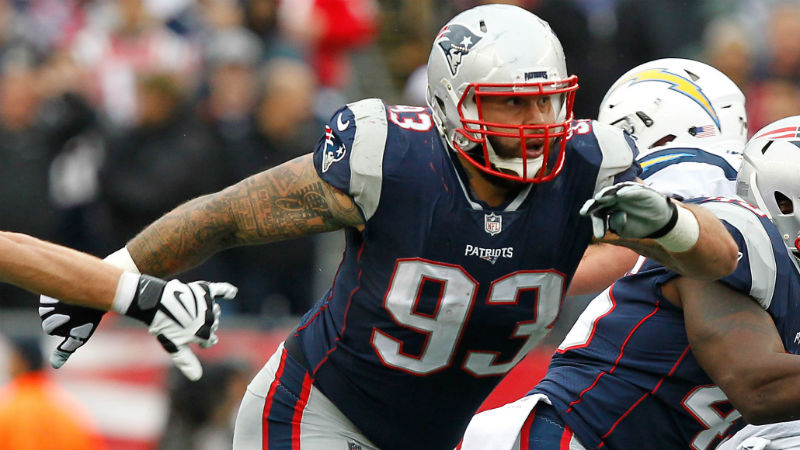 FOXBOROUGH — When the Patriots signed defensive tackle Lawrence Guy to a four-year deal last March, not a lot of fans knew of the veteran out of Arizona State.

However, in his second season with the Patriots, the 28-year-old has become a household name among the diehard fans of the team.

This season, Guy ranks tenth among defensive tackles with an 87.6 overall grade from Pro Football Focus ahead of former Pro Bowlers such as Geno Atkins and Casey Hayward.

“I think Lawrence has done a really good job for us in a lot of ways on and off the field,” said Patriots head coach Bill Belichick. “Run, pass, technique, communication. Yeah, he’s been a really valuable player for us.”

“He’s a hard guy to block, and he’s big. He uses his hands well. Again, he’s an instinctive player. He recognizes blocking schemes and play-action and things like that. Yeah, he’s done a good job. He works hard, and he’s gotten a lot better.”

When Guy signed with New England, he filled a need on the interior defensive line, and the former Raven couldn’t be happier about his decision to sign with the then Super Bowl champions.

“Of course, I love it here,” said Guy. “I love my teammates and my coaches. I wouldn’t want to be anywhere else, and I’ll continue to build on the relationships and my chemistry and continue to grow these next couple of weeks and years.”

Although the Patriot Way might not be for some people (paging Lane Johnson), the Patriots defensive tackle says playing for Bill Belichick has been everything that he expected, and that the regiment fits his personality well.

“We have a good reputation here. Working hard is pretty much the model, doing your job, so when I got here, I knew how it was going to be. They embraced me here, and I embraced them,” he said.

Guy is a perfect example of another mid-level free agent signing that has worked out well in New England, as he fits perfectly in the locker room and on the football field.

“I think he does an outstanding job. He’s big, he’s strong, he’s tough, and he makes plays. I think what they do with him in that scheme is outstanding,” said Jets head coach Todd Bowles.

Guy’s scheme fit along the Patriots defensive line from this perspective is two-fold: he has the versatility to play in multiple spots along the defensive front and has excellent technique along with football smarts as his head coach alluded to earlier.

“The biggest thing that we do as interior linemen is play with our hands and play with good technique,” said the 315-pound defensive tackle. “I believe that with this team and with our coaches we are constantly on each other about ‘hey we need to play like this, we need to do this,’ so it’s built in on our mind individually but with our coach, it’s constantly repetitive.”

“Once you start doing that you start buying into it more and more. It becomes second nature, and you can see it from everybody that has been on our defensive line when they got here they continue to evolve and improve on every part of that.”

In his second year with the Patriots, Guy also acknowledged that he feels more comfortable in the system than he did in year one. However, the 2011 seventh-round pick didn’t point to scheme but rather the chemistry he has developed on the field with his teammates.

“Every year you get more used to the system and get used to the players. The more that we play together, the better we understand each other,” Guy said at his locker on Friday. “That’s what’s going on. You can tell the players that have been here a couple of years they have that relationship with each other to play off each other and understand what we are doing.”

As mentioned above, Guy is the latest Patriot drafted in the later rounds to develop into a highly-productive player under Bill Belichick, even if Belichick had to dip into free agency to bring the Packers draft pick to New England.

Guy was the 233rd overall pick and the 39th defensive lineman selected in the 2011 draft and is one of 18 players at his position that’s still in the NFL from that class (out of 43).

Two NFL teams also cut the former Arizona State star, but he carved out a role for himself in Baltimore before landing a free agent deal with the Patriots.

How has Guy been able to outlast so many players drafted before him en route to an eight-year career (and counting) in the NFL?

“Heart. That’s the biggest thing is heart,” he said. “When you go out there, you put your heart on the line, and you will not be denied of anything you’re pursuing.”

“My wife was a big part of that also on and off the field to continue my mental state of mind, and my teammates. I’ve been with a lot of teams, and each teammate I’ve had its always been a good relationship. I’ve always had a good room of other brothers in there, so there’s always been something to play for besides yourself.”

“But I’d say heart is the biggest thing to have. If you never lose your heart and continue to grind out every day knowing your hard work will pay off, you’ll go far in this league.”

As the Patriots prepare for another playoff run, Guy will be at the center of the New England defense that looks to silence its critics just like he has for his entire NFL career.