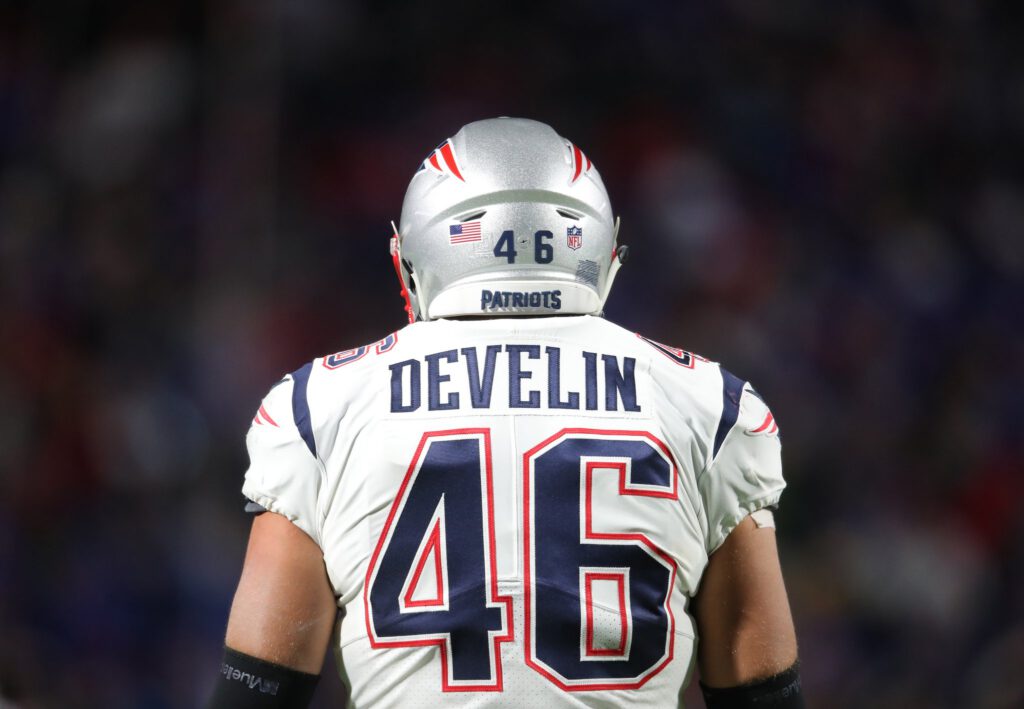 FOXBOROUGH — Nine weeks into the 2018 season, only 22 different fullbacks have logged a snap when once upon a time every team carried a lead blocker.

Although some NFL teams have moved away from the position, the Patriots have regularly rostered a fullback under Bill Belichick, and currently, have one of the league’s best in James Develin.

In his sixth season, the numbers cannot explain the impact that Develin has on the Patriots’ ground game.

But the running backs that he blocks for are fully aware of Develin’s value to the team.

“Oh, man. I tell James all the time when I’m in the game I hope you’re in the game because I want to run behind you,” said converted running back Cordarrelle Patterson. “He’s crazy. He doesn’t care who he’s blocking he’s going to try to run anybody over. As a running back, you need that out of a guy like that who’s just going to mess anybody up.”

“He’s very key,” added Patriots running back James White. “Like I said before, early in the year, not many teams carry a fullback. But he definitely makes a big difference for us. He can line up at running back, he can catch the ball, he can block. He’s very versatile; he’s on special teams too. So he’s been a big help for us, and he has ever since I’ve been here, him and the offensive linemen doing a great job opening up holes for us and giving Tom [Brady] time to throw the football.”

The biggest thing that Develin does besides create highlights out of punishing hits is reading blocks for the ball carrier behind him.

“He’s their guiding light,” said Patriots running backs coach Ivan Fears. “He reads it all for them plus he blows up the first guy he comes in contact with; he’s big, he’s big.”

Last week against the Packers, Develin was on the field for nine of Patterson’s 11 runs.

On those nine carries, Patterson ran for 60 of his 61 yards averaging 6.7 yards per rush managing only one yard on the two carries without Develin.

Patterson’s longest run of the day came on a 17-yard carry in the second quarter. The Patriots ran a toss play to get the speedy return man out on the perimeter. However, the Packers anticipated the toss and forced the play back inside. Pats left tackle Trent Brown and tight end Dwayne Allen did an excellent job of kicking the Packer defenders out to give Develin and Patterson a rushing lane. Develin leads the way blocking the linebacker, and Patterson sets up his blocks well with a curved entry into the hole before cutting off his fullback to burst into the secondary.

Although the six-year veteran makes reading blockers look easy, Develin said it’s the most challenging aspect of his job and that it took time to learn the details of the position.

“Making post-snap decisions and seeing things that happen in a split second,” Develin said in response to a question about the hardest part of playing fullback in the NFL. “Being able to decipher it and make the decision where to insert or who to pick up on any given play. That was stuff I didn’t fully understand about the position until I played it for a couple of years.”

“It’s on the fly. Sometimes it depends on what the defense is in but a lot of times it’s post-snap, and you just have to roll with the punches.”

“There’s a lot of times where I’m out in front of them that I have to make a decision and see how the line is opening up holes, but a lot of times these guys are right on it with me. Our offensive line does such a great job of sealing people out and giving me someone to block one-on-one, and our backs to such a great job running off of me.”

Even though Develin is primarily a blocker, he has a career-high eight receptions through nine games this season.

But despite playing all six seasons with Tom Brady, he has never caught a touchdown pass in a regular season game before meaning he’s not apart of Brady’s NFL record 71 different receiving targets on his 505 career touchdown passes (note: Develin has a touchdown during the 2014 playoff run).

The Pats fullback is not giving up hope that he’ll catch a touchdown at some point in the regular season, though, saying, “I thoroughly enjoy my role as a lead blocker and any time I can catch a pass I have to go out there and do that too, but I’m going to keep doing my thing, and maybe one will come my way someday who knows?”

Other teams may be giving up on the position, but despite the current shift away from fullbacks, Develin gave a very informed answer on the state of the position in the NFL.

“I think fullbacks will always have a place in the game of football,” he said. “A lot of teams kind of got away from that, but I think everything kind of works cyclically and as defenses get smaller to try to defend the pass, linebackers get smaller in particular, then there’s a little bit more of a need to have a lead blocker out there for running backs.”

“I think it’s just a fundamental, schematic thing. If you want that aspect of it, of putting a guy really that can go either way in a formation then that’s good,” said Patriots head coach Bill Belichick of the value of a good fullback.

And as you’d expect, Develin is extremely thankful that Belichick and Patriots offensive coordinator Josh McDaniels still believe in the position in today’s NFL.

“Absolutely, man. Absolutely. Their belief in it is the reason I’m here, and it has given me the opportunity to play in this league and live out a dream.”