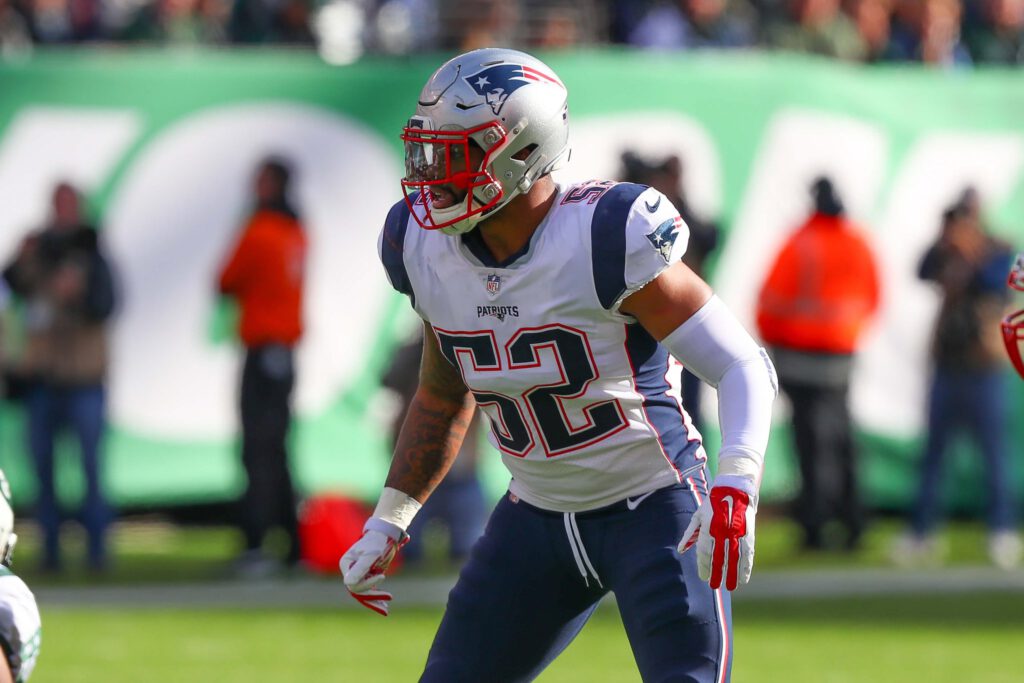 In fact, it was Roberts’ play through the first eight games of the season, combined with Collins’ struggles and contract situation, that contributed to Bill Belichick’s decision to part ways with the former Pro Bowler.

And the Patriots, fueled by Tom Brady’s revenge from Deflategate, rattled off ten wins in their last eleven games en route to their fifth Super Bowl title.

Collins’ departure seemingly meant nothing to the Patriots defense, and Roberts, a sixth-round pick out of the University of Houston, looked like a promising young linebacker.

However, in his second season, Roberts’ deficiencies in coverage were exposed, and the now third-year pro began to hear it from Patriots fans.

“Honestly, it doesn’t even matter. I don’t really even listen to it, I kind of laugh about it,” Roberts told CLNSMedia.com. “I really don’t [read the tweets]. It’s just you get on social media, and you see the [notifications], I start scrolling through and laugh.”

Although many have soured on Roberts, he has improved immensely in coverage in his third season thanks to a new approach to film study spearheaded by the 24-year-old’s desire to improve and some assistance from his coaches and teammates.

This season, Roberts is only allowing 7.8 yards per target on passes thrown his direction, which is a dramatic improvement from the 10.9 yards per attempt he allowed in his first two seasons, and he has quadrupled his career total with four pass breakups after deflecting only one pass in his first two years in the NFL.

“Growing as a player in the league. It was more like, I know my assignment, and I know where to be. But if they give you this formation, yeah the assignment tells you this, but this can happen, and if you just play this, that isn’t going to happen. It was more like understanding what offenses are trying to do. I just feel like I grew as a player. You know, a lot of the coaches, sitting down with Devin McCourty over the offseason, and just really trying to grow up as a player…it was more mental, way more mental,” Roberts told me after the Patriots’ win over the Vikings.

And his head coach and position coach have noticed his growth in coverage as well.

“Elandon’s a very aggressive run player and tackler. As he’s gained experience, he’s been able to, I’d say, process plays just a split-second quicker and recognize the differences between runs and play-actions and then having awareness of where the receivers are generally trying to get to on certain play-actions – like how the offense is trying to get the defense to react in a certain way so they can get receivers into a voided area – and he understands that. Once he recognizes that it’s play-action, he is working to that area where he needs to be, and he’s seeing things quickly and had a couple of real good plays on that,” Patriots head coach Bill Belichick said.

“I think E-Rob has really grown as a player. Obviously, I’ve spent a lot of time with him. This guy, he works extremely hard. I would say nobody studies more film or works harder in practice. I mean, he’s up there with anyone else on the team as far as that’s concerned. So, he’s really improved as a player in all areas – run game, pass game, how he studies. How he watches film has changed during his time here. I think he’s really done a tremendous job that way. He provides leadership for us, and he’s as tough and physical a player we have. So, we’re lucky to have him. He’s definitely improved a great deal over the past three years,” added Patriots linebackers coach Brian Flores.

Here’s a great example from the Patriots’ win over Minnesota of what Belichick was referring to when asked about Roberts’ development in pass defense this season.

Roberts is playing at his usual inside linebacker spot in the middle of the Patriots’ defense. The Vikings ran play-action with quarterback Kirk Cousins under center and two players in the backfield. Roberts recognizes the run fake and retreats to his zone underneath a crossing route from Minnesota wide receiver Adam Thielen. The play is designed to move Roberts out of that area of the field to find Thielen on the pass, but the Pats linebacker reads it beautifully and knows exactly where to go based on where the offense is trying to attack the defense off of the play-action.

As Belichick mentioned, Roberts is an aggressive, run-first player, and his turnaround in coverage was about harnessing that aggression.

“A lot of it is film study. If you see some stuff, you can narrow a lot of stuff down. I can be like, ‘okay, I can be slower on this play because I don’t think they’re about to run, I think they’re going to do this,’ or I can be more aggressive. A lot of that came with film study. It was just maturing as a player.”

The Patriots linebacker, along with his coaches, credited teammate Devin McCourty for his growth, and McCourty explained that he tried to help Roberts see the game through a safeties eyes.

“I think that’s just who we are player types; he’s a smaller linebacker but he’s downhill knocking people heads off, and I think pass. I tried to watch film with him and tell him what I see by formations when guys come out what I would think if I was him from a coverage drop or man-to-man, and I think for him that’s new. You watch him play, he’s knocking people out every play and is full speed. In coverage, sometimes it’s not that. It’s patience, understanding leverage, stems, and all of that stuff. I just thought he doesn’t really think about that stuff to play to it, and hearing it and talking about it with another player helped him out.”

As you’d expect, Roberts is very thankful that he has a teammate like McCourty that’s willing to help him work on his craft.

“Devin is a great leader. He’s a captain and a leader of the team, leader of the defense,” Roberts said. “I asked him to help me out in coverage, and we sat down and watched film together, and we just grinded. Even on the field, I ask him small questions like, ‘do you think I should go this way or that way?’ and he helps me out from that standpoint and helps me understand it better.”

Roberts also acknowledged linebackers coach and de facto defensive coordinator Brian Flores’ role in his development and his ongoing effort to build on the progress he has made.

“He’s helped me grow in every category,” Roberts said of Flores. “With the coaching side of it, taking hard coaching and stuff like that because the game gets hard. When you’re in those peaks in the game when it’s time to go, he always has me ready for those situations. It’s hard coaching, but at the same time I appreciate him doing it.”

As far as run defense goes, Roberts has continued to build on a strong foundation in that area of the game as well.

This season, Roberts’ 10.1 run-stop percentage is tied for ninth-best among linebackers according to Pro Football Focus (min. 20 percent of snaps), and he ranks third on the team with 24 run stops.

Even though Roberts is improving, he remains humble, knowing that he has a long way to go.

“It feels good, of course, because I work at it,” he said. “But at the same time, I look at the small things, and I still critique myself really hard.”

The Patriots’ linebacker group, with Roberts at the forefront, has received its fair share of criticism over the last few seasons.

But if we are going to critique their play, we must also give credit where credit is due, and Roberts has made great strides this season.