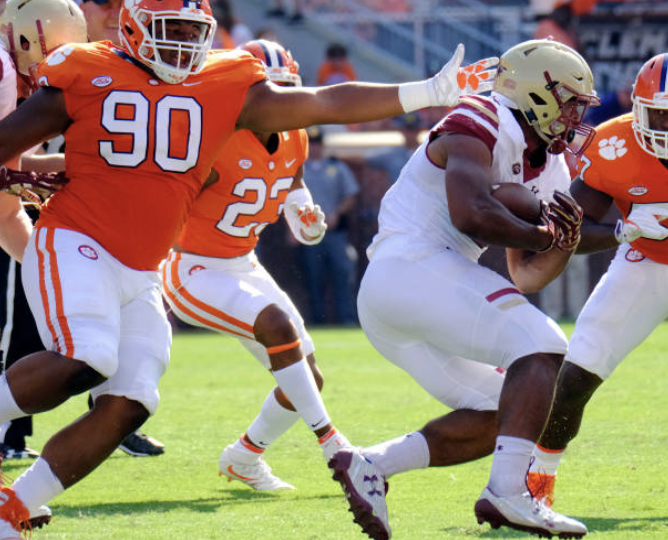 BOSTON — This is the chance Steve Addazio and everyone associated with Boston College football have wanted for over a decade.

It’s not put-up or shut-up time. It’s much more than that. It’s a chance for the Eagles to show they belong in the elite stratosphere of Division I college football.

No. 14 Boston College is taking on the best team in the nation not named Alabama. Dabo Swinney brings his Clemson Tigers to town at 9-0, the clear No. 2 team in the land after averaging 55 points in their last four wins, crushing Wake Forest, NC State, Florida State and Louisville by respective scores of 63-3, 41-7, 59-10 and 77-16.

Clemson has a defensive front that will likely all wind up in the NFL, likely all drafted within the first 2-3 rounds of the draft.

If you don’t know the names Clelin Ferrell, Christian Wilkins, Dexter Lawrence and Austin Bryant, you will after Saturday. Trayvon Mullen is a top-5 defensive back in the country and another projected high-round pick.

“I have to say that I’ve always been really impressed with Dabo Swinney and the job that he’s done at Clemson. But they’re really just such a really elite coached team on all three phases. Their coordinators are phenomenal, and Dabo is just obviously a great head coach who’s maintained a level of excellence at the highest, highest level with their recruiting, with the management of their program, with just really, really impressed, and I see a team that’s probably as elite a team as I’ve seen in my career,” said Addazio. “So the challenge for us will be a great challenge for sure. Super excited about the fact that we are home. It will be a great deal of energy in our stadium, and we’ve had a good week of practice.

“We’re looking forward to this big, big challenge that we have in front of us here, but have just the utmost respect for the whole Clemson program, their level of play, how they carry themselves. Just really very, very impressed. With that, I’m happy to answer any questions”

This is a homecoming game of sorts for Springfield, Mass. native Christian Wilkins, a Boston College fan growing up.

“I remember Christian very well,” Addazio said of the recruiting process. “First of all, he was a great player, but he had just such a great personality and a great presence about him, a wonderful, wonderful guy. Extremely talented. Obviously Clemson got themselves an elite player who is a tremendous role model for the university.

Here’s the thing. The Eagles have some elite players themselves. One of them is running back AJ Dillon, who has been looking forward to this game after being held to just 57 yards on 18 carries last year.

“I think that you’re talking about they’ve had an elite defense there and still do right now,” Addazio said. “Maybe their best. But just got really good players and really good scheme and do a heck of a job preparing themselves. Every year is a new year, and that’s just the way that is. So here we come now, and we’re going to hope that we have a healthy AJ Dillon and put together a good plan and see where those chips fall.”

Quarterback Anthony Brown is facing the stiffest test of his young career at BC. He needs not only Dillon to be big but receivers Kobay White and Jeff Smith as well as tight end Tommy Sweeney to catch nearly everything thrown in their direction.

“It’s hard to make plays against Clemson,” Addazio said. “Very, very difficult. You’ve got to earn every one of them. They were able to make a few, and that’s what you need to do. You need to be able to make a few plays. You need to be able to get the ball down the field, and it’s hard. You’re going to have a real hard time going down in increments of three and four yards the length of the field against the kind of defense that they have and the kind of players they have.

Clemson is ranked third in the country in overall defense behind Michigan and a Miami Hurricanes team that BC handled on Oct. 26 at Alumni Stadium. But Miami doesn’t have the stack of future NFL talent that Clemson does. Last year, BC was able to hang with the Tigers on the road before Clemson wore them down in a 34-7 Tigers win.

Clemson will be hard to score on again as they have the fourth-best scoring defense in college football. But this is an offense that ranks behind only Alabama, Utah State and Oklahoma at 47.8 points per game.

The elite players for BC need to match the elite level of Clemson for Saturday’s game to be a real contest. Defensive end Zach Allen is a potential first round pick and Lukas Denis could be the best free safety in college football. For Allen, he needs to be a beast not just in getting to quarterback Trevor Lawrence but making sure running back Travis Etienne doesn’t run wild.

“Yeah, he’s an elite player. He’s made a lot of plays all year long, a lot of QB hurries, a lot of hits,” Addazio said of Allen. “I just think that I’ve been around a lot of guys, and his rare combination of power and athleticism and speed I think is probably surprising to some people. He’s an elite pass rusher, but he’s got great power, and he can really play well against the run. He’s been dominant all year, and I would expect he’ll be a real factor on Saturday night.”

While much of the focus over the last several years has been on Addazio – the bodacious voice and image of the program – it’s his boss that has really pointed to a moment like BC will have one Saturday.

From the moment College Football Gameday kicks off at 9 a.m. on Stokes Lawn to kickoff to the final gun, Saturday should be the ultimate showcase for athletic director Martin Jarmond, who came from the football epicenter of Ohio State (and before that Michigan State). From the time he took over in the spring of 2017, he made no bones about the need to get the revenue generating football program up to speed so that the athletic department and other fundraising branches of the institution can reap the benefits.

If you have a Division I football power these days, the fundraising potential is nearly limitless.

Saturday, the imaging and marketing of the opportunity begins early in the morning and carries on throughout the afternoon. The school is allowing four hours of tailgating leading up to the 8 p.m. kick. But Jarmond is more than aware of BC’s traditional late-arriving crowd, which has resulted in a half-empty Alumni Stadium on TV before. That won’t be the case Saturday night.

? We heard you…4 hrs… pic.twitter.com/4rpelgIvPd

“My leadership style is consistent with BC’s values: operating with integrity, passion, and a relentless focus on getting better every day,” Jarmond said in his introductory news conference on April 21, 2017. “I can assure you that I will put in the work to make our students, alumni, and fans proud of BC athletics. I knew it would take a special place to leave Ohio State. It is clear to me that Boston College is that place.”

And the path down that road becomes a lot smoother with a win that would shock the football world.