Lazar: Ty Law Should Be the First of Many Patriots Hall of Famers From Dynasty Years 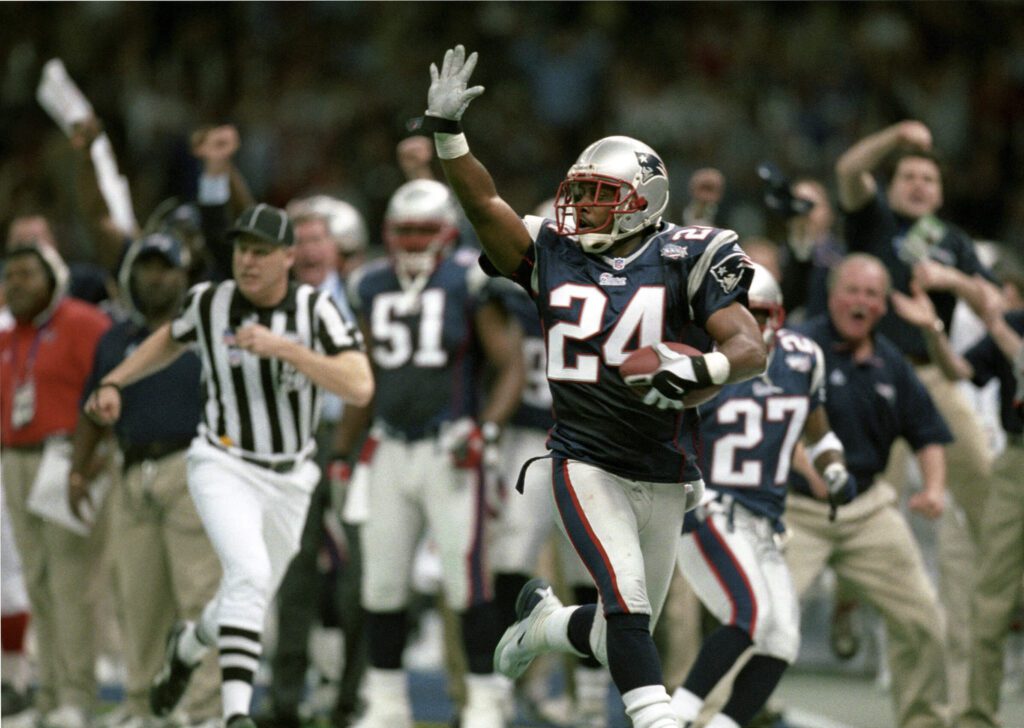 The former Patriots cornerback became the fifth player in franchise history to be elected to the Pro Football Hall of Fame on Saturday.

The only question now is what took so long, and why is the Hall of Fame holding out on the Patriots dynasty?

Law stood with reporters for over ten minutes in a ballroom a few stories above The Fox Theater in downtown Atlanta where Chiefs quarterback Patrick Mahomes was named the 2018 regular season MVP the night before Law’s former team will play for a chance at a sixth Lombardi Trophy.

It would’ve been well within his rights to boast about his Hall of Fame career on his night, but instead, he lobbied hard for his teammates on the early 2000s Patriots to join him in Canton.

“I’m at a loss for words because I’m not just representing myself,” Law told reporters after the announcement. “I’m representing Willie McGinest, Tedy Bruschi, Rodney Harrison, Troy Brown, Lawyer Milloy, Otis Smith. All those guys that had such an impact on me as a football player and as a champion football player, now a Hall of Famer.

“I want the world to know that I wouldn’t be here without those guys, and somebody needs to look at those guys and give them an opportunity to stand here as well because this whole dynasty since Tom Brady was at the helm is no accident.”

“I’m just one of the guys. I think there should be more of me like this. I’m not only representing Ty Law; I’m representing the Patriots, and all the guys before me and with me that didn’t get the opportunity to do so.”

It took Law three tries on the final ballot to breakthrough, and teammate Richard Seymour didn’t make the cut in 2019, but Law is hopeful that this is the start of the Hall of Fame nods for the Pats dynasty.

“I think this is the start of something special,” he said. “You look at Willie McGinest, Tedy Bruschi and you look at Rodney Harrison’s numbers why isn’t he being considered right now? It’s crazy that more guys aren’t being recognized.”

“You can start with Richard Seymour. He was in the room, and when you’re in the room, there’s always a chance. We don’t know when that’s going to happen, but I think more and more people will get in. What is the criteria?”

“It’s amazing that I’m here, but I also want to let the world know that there’s a lot of guys that I played with and I wouldn’t be standing here talking to you if it wasn’t for those guys.”

Although Law took time to campaign for his teammates, we also reminisced about what was an exceptional and Hall of Fame worthy career for the original number 24 in New England.

Law was a true shutdown corner that rewrote the NFL rulebooks, literally, with his physical nature but also had rare movement skills for his size.

Those that watched Law in practice said he glided around the field effortlessly, and former teammates recall the type of confidence and swagger that we usually associate with Hall of Fame caliber corners.

During Bill Belichick’s Friday meetings, the Patriots head coach quizzes players on the game plan for Sunday. Who’s covering who, who’s blocking who, and so on.

Law stood up in the meeting before Belichick began his exam and said, “I’m Ty Law. I got Eric Moulds, and I’m going to shut his a** down.”

Moulds had six catches for 50 yards on 15 targets in the game.

Stepping up in big moments, and shutting down Pro Bowlers, became a regular occurrence for Law, and it all started in the Patriots’ first Super Bowl victory over the Rams in February of 2002.

Asked what was his favorite interception the now Hall of Famer said, “of course the Super Bowl interception stands apart. It’s the trademark for me because everyone knows that play and that’s what kind of started it all. I do have a few other interceptions that I can recall that felt just as good in playoffs or big situations, but that [Super Bowl interception] will probably follow me wherever I go, and I’m just fine with that because that was the turning point of what came to be a 20-year dynasty.”

Law’s performance in the 2001 playoffs started a trend for him in big games.

Nobody intercepted NFL legend Peyton Manning more than Law who had nine career picks against the former Colts and Broncos star including five in the postseason.

After intercepting Manning three times in the 2003 AFC title game, the NFL started to enforce illegal contact rules against defensive players. Then Colts general manager Bill Polian complained to the league about Law, in particular, who put Indy wide receiver Marvin Harrison in a straight jacket.

“I look at it as a compliment because you changed the game in a certain way,” he said of the rule changes. “They didn’t like that. It’s an offensive game. They claimed people go to see the touchdowns. Maybe it’s not written like that, but everyone calls it the ‘Ty Law rule,’ and that’s pretty cool. I take it as a compliment.”

“I knew at that time going up against a Hall of Famer like Marvin Harrison who was quicker and faster than I was that I had to try to offset that somehow by being physical. That’s always how I played the game. I was taught to play that way, and it worked to my advantage.”

“I probably wouldn’t get a [game] check because the way they play the game today and the way I played, I probably would’ve given all my money to charity,” he then joked.

The players from Patriots dynasty 1.0 were unfairly held out of the Hall until now.

Law, Seymour, McGinest, Harrison and the other stars of the early 2000s Pats that won three out of four Super Bowls have Belichick, and a team-oriented approach held against them.

But the wait is over. Law is in, and it’s about damn time.