Still six weeks remain, but these Bengals sure look like contenders, and maybe more. 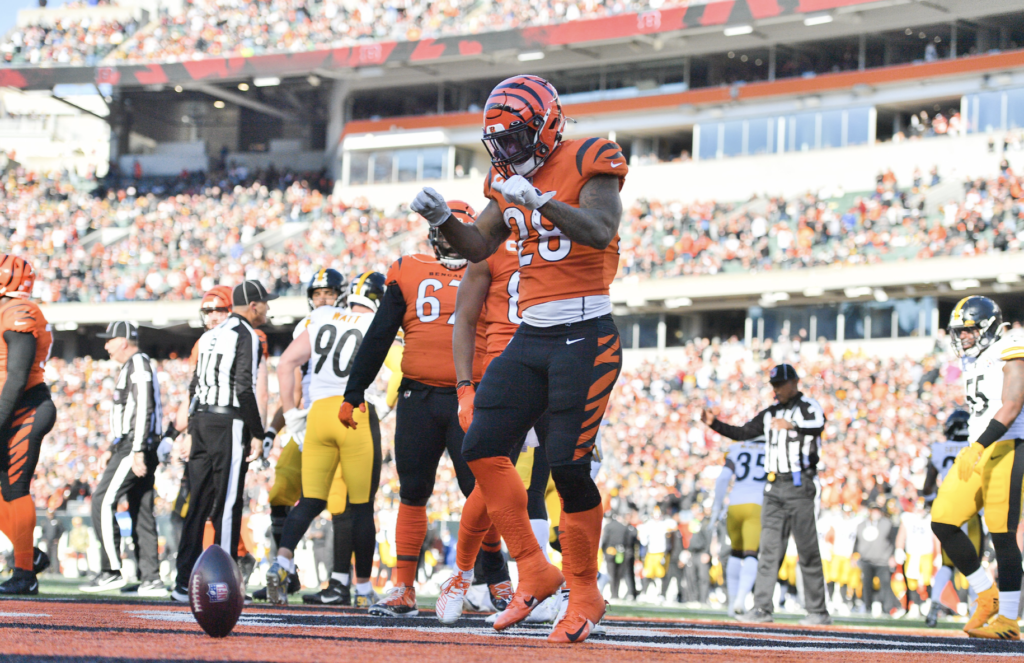 It’s a team that is proving resilient and talented. Determined and poised. Humble and confident.

After Sunday’s drag race past the Steelers, it’s time to raise the expectations of what this team can accomplish.

Can it reach the playoffs? Win the division? Of course, it can. But this team has its eyes on much bigger goals, like say the AFC Championship and the Super Bowl in LA in February.

“In order to get to a certain point, which we all are eying the playoffs and potentially The (Super) Bowl, we just got to keep on dialing in each and every week, coming to work wanting to work. I see that everybody is definitely happy around here, and t makes going to work easier, especially when it gets cold,” Joe Mixon said.

“The boys dial in each and every week, come ready to work, they stay studying and preparing and doing all the right things that we need to do. That’s just things I see around here out of our teammates. Everybody wants to get better and be put in the best position to win. We’ve just got to keep on doing that.

Asked about sweeping the Steelers for the first time in a season series since 2009, Mixon, he of the career-high 165 yards and two touchdowns Sunday, offered perspective.

“I mean, I guess it’s cool. But at the same time, that’s just another team in our way to where we need to be and where we want to go. Everybody knows that it’s in front of us,” Mixon added. “Our work is cut out for us. We’ve just got to do all the things the right way, come in each and every week to get better and keep building on the great things.

“The stuff that we need to work on, we just try to improve on that. Like I said, I’m just happy for everybody reaping the benefits around here. It’s a new thing for Cincinnati. Well, it’s not a new thing, but at the same time, they haven’t had it as much. At least since I’ve been here. It’s a great feeling, but at the same time, we just have to keep building each and every week.”

Joe Mixon says he Game Ball is a result of “a lot more confident” offensive line. “They’re like no other” #Bengals pic.twitter.com/KKPXoeXZUP

The Bengals three weeks ago were humbled and embarrassed by the Browns, 41-16, at Paul Brown Stadium.

On Sunday, they flipped the script in the most powerful way possible, dismantling the Steelers and putting Ben Roethlisberger on ice in a 41-10 win at a delirious Paul Brown Stadium. The Bengals drove right down the field on the opening drive and this time, there was no pick-6 going the other way. Instead, their undeniable leader was not to be denied on this Sunday.

Joe Burrow showed the world, Minkah Fitzpatrick and himself that his left knee is back to normal with a juke move on an eight-yard TD run to open the game. Eli Apple picked off Roethlisberger and returned it to the 5. Yes, the Bengals didn’t get in the end zone but Evan McPherson was good from 31 yards and it was 10-0.

The Steelers did respond with a drive but the defense stiffened and held to a field goal. The Bengals scored the final 21 points of the half, highlighted by Mike Hilton’s 24-yard pick-6 of Big Ben. The Bengals led, 31-3, at the half.

The aftershocks of this quake of a win could be felt all around the AFC. This was Cincinnati announcing loud and clear that they will be a player and contender in the final six weeks, with the Titans, Chiefs, Chargers, Bills and Patriots.

“We’re right where we want to be,” Burrow said. “We have high aspirations this year. We can’t let up know. We started out strong, then we kind of skidded a little bit there in the middle of the season. Now, coming down the stretch, I think we’re really hitting our stride, so we’ve got to keep having great weeks of practice.

“I think we have guys that are excited about where we’re at, but not satisfied.”

That, in a nutshell, is what makes these Bengals so dangerous.

In the offseason, they added the right veteran pieces in Hilton, Larry Ogunjobi, Trey Hendrickson, Chidobe Awuzie, Riley Reiff, all of whom have been on winning programs in the NFL. They did so with the point of competing not in 2022 or 2023 but this season.

“You’ve got a talented quarterback in Joe Burrow, a talented back in Joe Mixon, and a great O-line — you can’t ask for more from me,” Hendrickson said. “And then I can’t say enough about the weapons he has outside. That offense is exciting for a defensive player to come into this building. And then even the defense, and the pieces they have — rushing with Sam (Hubbard), Larry (Ogunjobi), and D.J. (Reader), the linebackers are fitting holes in the run game, and the coverage is amazing.

"It's a fun thing when you're balling with your brothers. We're just loving football." Trey Hendrickson on the great vibes for the #Bengals after a 41-10 thrashing of Steelers pic.twitter.com/c9wp2xGM1O

The Bengals had the pieces, but they needed wins to convince themselves. All teams in Cincinnati’s position do. With a 41-17 demolition of the Ravens in Baltimore, a 24-10 win in Pittsburgh and a 32-13 win in Vegas over a Raiders team that just beat Dallas in Dallas, you now see why Sunday’s win takes on more significance.

This team has a lot in common with the 1981 Bengals. That team was coming off a 6-10 season in Forrest Gregg’s first season in 1980. When they started beating up teams on the road, like Baltimore and San Diego, teams took notice. They cruised past the Rams and Broncos at Riverfront and then announced themselves with a 17-10 win in Pittsburgh to claim the AFC Central.

The 63,238 on hand at PBS was treated to a coming out of sorts Sunday. Everyone was looking for the cliché passing of the torch, and while there was a degree of that Sunday, as noted by Mike Hilton, there’s much more at stake than that for this team.

“Absolutely, no question about it,” Hilton said of a guard-changing. “Beating these guys, for me twice, and for some of these other guys three times straight, it’s a big change in the guard in our opinion. It’s giving us a lot of confidence, and guys are excited to see how the rest of the season plays out.”

Hilton calls it a definite “changing of the guard” with the #Bengals with Steelers pic.twitter.com/OdTzrYmssm

To Zac Taylor, a big part of Sunday was also about the fans, the fans who have suffered a lot since that rainy, bitter, bitter night in Jan. 2016 when Pittsburgh’s Chris Boswell nailed the coffin on arguably the most painful defeat in Bengals history. These fans got a lot more than just a blowout win over their hated nemesis. They received a huge dose of hope and perhaps a glimpse of what’s to come.

“I agree with that. For me, we need the energy of this crowd,” Taylor told me. “These people pay good money to watch us play, and we need to win it at home. It’s fun to win on the road and go shut up some other crowds, but for us, our fans need to be rewarded. They’ve supported us through some really difficult times, so we need to go put a winner out there that they can cheer on and be proud of.

“To send a divisional rival home with a loss and let our fans enjoy that, that’s important to us. It’s important for us as players and coaches to get this win and feel it in the locker room, it’s just as important for our fan base to feel this and get to enjoy this from week to week.”

Next up, the Chargers next Sunday at Paul Brown Stadium, and another team that believes it has a young, gifted quarterback ready to shock the world.