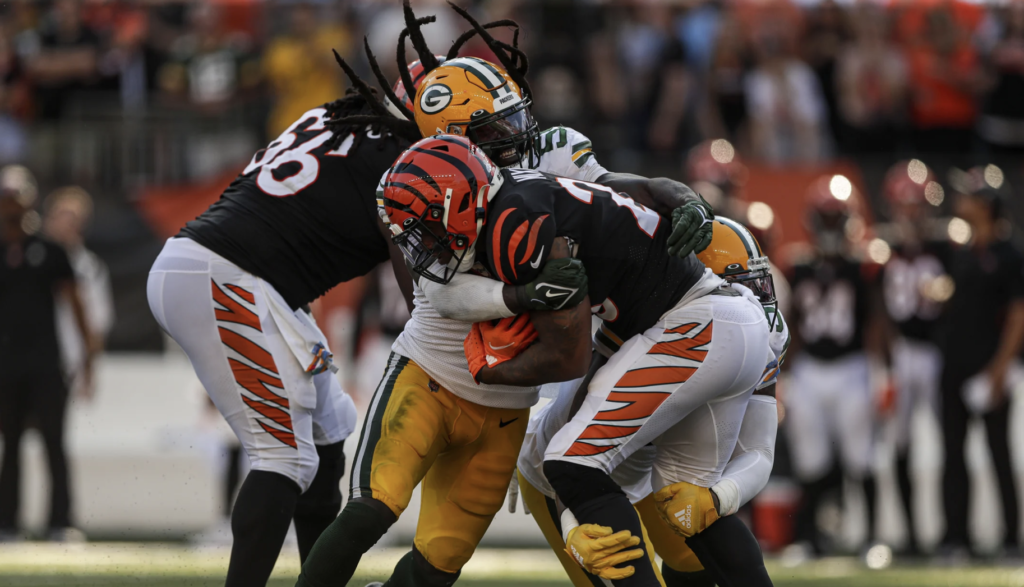 CINCINNATI – Can the Bengals learn their lesson from a heartbreaking loss to a future Hall of Fame quarterback with chance after chance to win the game?

That’s the question that will determine the course of the 2021 Bengals as they chart a course they hope will lead to the playoffs.

It’s going to be a tricky course, rife with potential letdowns, like this week in Detroit and Halloween vs. the Jets, and monumentally big hills, two matchups each vs. Ravens and Browns, Justin Herbert and the Chargers and Patrick Mahomes and the Chiefs.

On to the next one. WHO DEY! pic.twitter.com/FnmyrgvQ8u

In this day and age of social media, it’s easy to be cynical about clubhouse chemistry and players sticking together and fighting as one. But this Bengals team certainly seems to be a tight-knit group, which leads one to believe Sunday’s loss won’t build doubt but character that leads to finishing off an elite opponent down the road.

There are still 12 games to go in the 2021 season and plenty of time for the Bengals to show that character.

“(Defensive coordinator) Lou Anarumo, he is a fan of boxing,” corner Chidobe Awuzie said. “He showed us a lot of boxing clips and historical fights. That’s what it is every time we are out there. And that’s what it seemed to be, like its going to be for the rest of the season. We are just bowing our chin up and one of these games against a really good team we are going to have our knockout punch.”

There are many lessons to be taken from Sunday’s 25-22 loss to the Packers at Paul Brown Stadium. But three stick out from the epic bout:

Joe Burrow was literally poked (in the throat) and prodded all afternoon long. He never looked like he was comfortable in the pocket. And when he did scramble, he too often opened himself up to be a tackling dummy, as was the case on his second quarter scramble to the left in which Packers safety Darnell Savage, true to his surname, delivered a brutal blow to Burrow on third-and-12. He got nine yards and his bell rung.

Burrow was sacked three times in the first half. Part of his scrambling appeared to be his desire to escape from the pressure he was feeling in the pocket.

Does Burrow know how to slide?

“Yeah, he did it late in the game, right? Yeah, he knows how to slide,” Ja’Marr Chase offered. “He’s just hard-headed.”

It’s great to be stubborn. It’s more important for Joey Franchise to be healthy and upright. That, maybe more than any other lesson to be taken from Sunday, is the key to the rest of the season. We saw what happened last year on Nov. 22 in Landover when Burrow didn’t feel comfortable in the pocket. If Burrow isn’t protected, he’s going to start thinking he has to do more with his legs.

Of course, there’s a fine line here. You want your quarterback to be able to run for it, like he did on fourth-and-2 at the Packers 42 on the game-tying drive. And yes, it’s football. He’s going to get hit. But Burrow isn’t everything to the Bengals hopes and dreams because of his legs and feet. It’s his mind, eyes and arm that will take them to bigger and better places.

Surely, head coach Zac Taylor has communicated the need to stay in the game to his quarterback. Feeling the pressure in the NFL is different than college and pocket presence appears to be something Burrow still needs to work on.

It’s complicated by schemes designed to get to the quarterback now more than ever in the NFL, which is why the mobile quarterback and stretch offenses came into vogue. It was a way to offer quarterbacks a way to get out of the pocket and create on their own. But Burrow also needs to get rid of the ball and live to see another down.

When he did rollout to pass it was effective – most of the time. He connected with Chase on the 70-yard bomb just before half that woke the Bengals from the sinking feeling of a 16-7 hole and the sense the game was quickly slipping away.

The Bengals showed us Sunday they can play with the elite teams in the NFL, and the elite quarterbacks.

Yes, the secondary gave up 206 yards to Davante Adams on 11 catches. But the Packers had just two touchdowns Sunday. Think about that for a moment. Adams was, on three instances, running open in the Bengals secondary. Those obvious breakdowns led to big gains of 59, 34 and 24 yards.

“Everything, we tried a lot of things. Great players, great connection between those two,” Bengals corner Chidobe Awuzie said. “We had some roll coverages, we had some double coverages. We had some single coverages. We had quarters, we had man, we had zone, we had everything. I think that’s the type of defense we are. We have to focus on what we do. So far, we have been able to do it all. I think it’s going to help us later on in the season playing this type of coverages.”

And, as defensive coordinator Lou Anarumo cautioned earlier in the week, Rodgers was not going to be kept from targeting his favorite receiver. Yes, there were breakdowns, but the Bengals are hardly going to be the only team to give up yards to Adams.

The Bengals twice had chances to end this game with a win on the leg of their trusted rookie kicker. And twice they missed by inches. They also won the coin flip in overtime and committed what should’ve been a fatal error.

The Bengals know that targets, catches and yards don’t beat you, points do. And for all the numbers Adams put up Sunday, Green Bay was held to 22 through four quarters. Cincinnati’s defense stiffened up three times to allow only field goals. They held Aaron Rodgers to 2-of-5 in the red zone.

This, in a nutshell, is why the Bengals should have a chance later in the season. If the defense stays reasonably healthy, the Bengals should have a fighting chance the rest of the way. They are much better prepared to handle the likes of Lamar Jackson, Baker Mayfield, Justin Herbert and Patrick Mahomes. They’re not going to see any quarterback that is more precise and lethal than Aaron Rodgers, and Rodgers found the end zone only twice.

“I think we can go really far with this team,” Chase said. “Our defense is playing great ball right now. I want to say that, because they are keeping us in a game with great teams. Like on the road in Pittsburgh, this game, our defense is holding it down for our offense.

“They’re giving us the ball back and (providing) opportunities, making plays. We’ve just got to capitalized on stuff like that. (When) we have the ball, we have to take advantage of it. Put a dagger in them and kill ’em and go home happy.”

The Bengals absolutely, positively cannot afford a letdown this week as they travel to Detroit to take on a winless Lions team at Ford Field. If the Bengals have any intention of proving to themselves they’ve put the Green Bay heartbreak behind them then they must go about the business of beating an inferior team.

“I know what kind of team we have. We’re going to fight” Zac Taylor #Bengals pic.twitter.com/R3F4MonFJe

“Well, you don’t know where that inch is gonna come from in the week,” Trey Hendrickson said. “Maybe it’s in the weight room, maybe it’s studying film, maybe it’s recovering a little better. Maybe it’s what you eat, what you drink—there’s stuff like that about being a professional is not just the time that you put in in the building, at least for me. But it’s disappointing.”

Being disappointed after a game like Sunday’s is natural. Using it as motivation to hit the film room, weight room and practice field with intensity is what winning teams do.

“But this team’s got fight to the end against great teams, great quarterbacks. I believe in our guys, and this going serve us well over the course of the season. We’re battle-tested.”