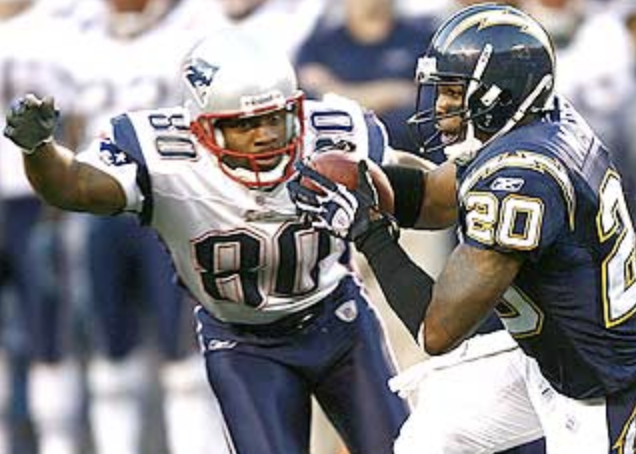 As Rodney Harrison watched the wild ending of the first half of the Eagles-Bears playoff game from his New York City NBC studio, he couldn’t help but think back to his days with the Patriots.

Harrison told the national TV audience that Bill Belichick would always remind his players to play past the whistle and never assume a play to be dead when there was a loose ball on the field.

In the final 30 seconds of Sunday’s first half between the Bears and Eagles, Mitch Trubisky connected with Anthony Miller inside the Eagles 10. Miller was stripped of the ball by former Patriot Cre’von LeBlanc after three steps, which qualified it as a catch and fumble.

But there was, of course, one other huge catch to the play.

Since no player went to pick up the ball after the whistle, the referees ruled the play an incompletion upon review, because someone has to recover the ball in order for the play to be overturned as a catch-and-fumble. Had the other Eagles defensive backs or LeBlanc himself recovered the ball instead of celebrating the break-up, the Eagles would’ve prevented a go-ahead field goal before half that made it 6-3 Bears.

There was someone else paying attention that remembered a certain play against Philip Rivers and the Chargers 12 years ago in the playoffs.

Bill Belichick’s Patriots were in dire straights with just over six minutes remaining, trailing the powerhouse Chargers, 21-13, in the AFC Divisional round at Qualcomm Stadium. Tom Brady had 4th-and-5 from the San Diego 41. His pass intended for Troy Brown over the middle was picked off by Marlon McCree at the Chargers 31. But Brown didn’t give up on the play.

He went aggressively after McCree and punched the ball loose, with Reche Caldwell recovering at the Chargers 32 for a new set of downs. Five plays later, Brady hit Caldwell for the touchdown and Kevin Faulk ran in the 2-point conversion for a 21-21 tie. Stephen Gostkowski would win it with a 31-yard field goal with 70 seconds left.

Nate Kaeding missed from 54 yards and the Patriots pulled off one of the more improbable playoff victories in franchise history, prompting several Patriots to do the Shawne Merriman “Lights Out” dance on the Chargers Bolt at midfield, eliciting the “absolutely no class, and maybe that comes from their head coach” reaction from LaDainian Tomlinson.

So, on Monday, after watching the Bears and Eagles game and no doubt with that playoff game against the same quarterback he’s about to face on Sunday, Belichick said he does indeed use those games as teaching moments for his players.

“We hit it again (Monday),” Belichick told me. “As Rodney said, we’ve been through it a thousand times but we went through some of those things again today just to make sure everybody understands what we want to do and how important it is to do the right thing in situations like that or other game-type situations.”

There’s a reason Troy Brown and Kevin Faulk are two Belichick’s favorite players. They were almost always keenly aware of score and situation in every playoff game they played. Both had key roles in that win over Rivers, Antonio Gates and the Chargers on Jan. 14, 2007.

“Again, there are so many close plays in all these games – fumble, no fumble, score, no score, catch, no catch, did it cross the goal line, did it not cross the goal line,” Belichick added. “It seemed like there were a dozen of those kind of plays just in this weekend so every inch, every little thing is so important. We’ve emphasized it before and we’ll continue to do that.”