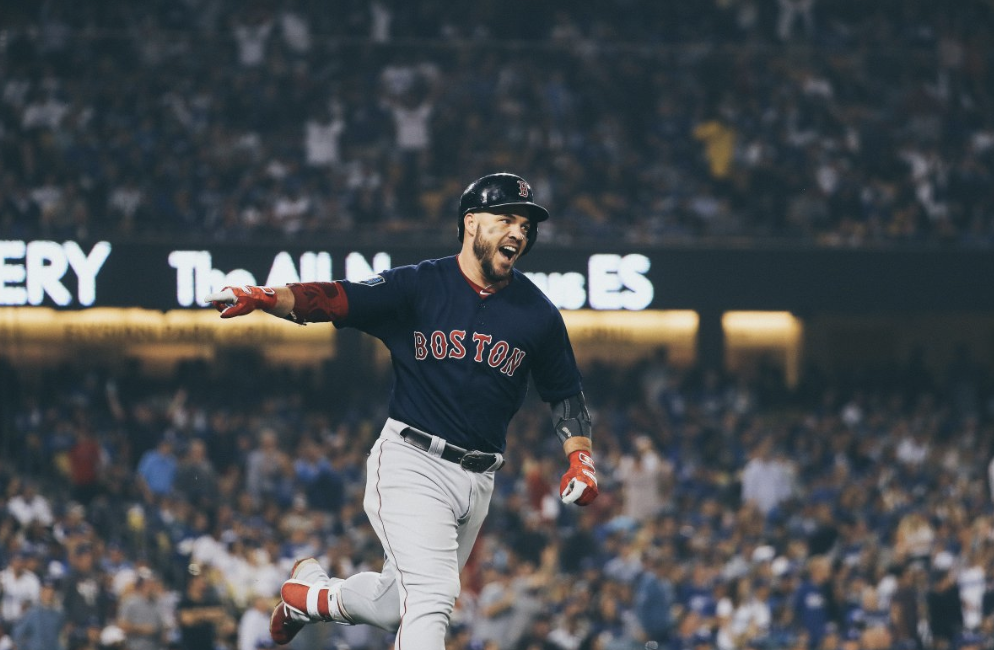 Series MVP Steve Pearce homered twice and drove in three and David Price limited the Dodgers to one run over seven innings as the Red Sox beat the Dodgers, 5-1, here at Dodger Stadium Sunday night to capture the ninth World Series title in franchise history and their fourth since 2004. All three postseason series and the division title were clinched on the road.

Price could’ve made an argument for Series MVP as well, winning Games 2 and 5 and appearing in relief in the epic Game 3 loss. He also won the clinching game in Houston in the American League Championship Series.

Joe Kelly struck out all three batters he faced in the eighth in relief of Price and Chris Sale closed it out in the ninth to crown Alex Cora a World Series champion in his rookie year as manager. Cora became just the fifth rookie manager in history to win a World Series in his rookie year, and the first since Bob Brenly with the 2001 Diamondbacks.

Red Sox general manager Dave Dombrowski traded for Pearce on June 28 to provide some right-handed power against lefties. In the end, it turned out to be be the most important acquisition he made all season.

“One of the favorite things I’ve seen when I’ve been here was the team chemistry on and off the field,” Pearce told me before Sunday’s Game 5. “And when I came in it was having fun and laughing, everyone was together and talking baseball. And then you notice on the field when you’re playing against them for so long, they’re always having fun. And it’s very contagious, and it’s just a great atmosphere over there.”

The 35-year-old Pearce, who drove in seven runs with three homers in Boston’s final two Series wins, joined Babe Ruth and Ted Kluszewski as the only players 35 and older with multiple home runs in a World Series game.

The Red Sox responded in the best way possible to Friday night’s heartbreaking loss, taking the series on the Dodgers turf. For the Dodgers, they saw the opponent celebrate a world championship in their home stadium, as the Astros and Alex Cora celebrated a Game 7 win in 2017. The Dodgers see their World Series drought grow to 31 years.

The two sluggers in the regular season, Mookie Betts and J.D. Martinez, also homered for the Red Sox, who finished a best-ever 108-win season with the fourth title since John Henry purchased the team before the 2002 season. The Red Sox are 16-3 in World Series games beginning with their sweep of the Cardinals in 2004.

The karma and tone for Game 5 was set in pregame when the Dodgers played a video of Magic Johnson and Larry Bird teasing each other about championship style in Boston and Los Angeles.

BIRD-MAGIC MAKES IT TO #WorldSeries in a terrific pregame video from #Dodgers and Larry Legend again gets a major burn in on Hollywood #RedSox @RedSoxCLNS pic.twitter.com/yJwcqxDOdb

The Dodgers turned to Clayton Kershaw to keep their season alive in Game 5, despite a 1-3 record with a 6.35 ERA in five career win-or-go home postseason starts.

The start couldn’t have been much better for the Red Sox. Game 4 hero Steve Pearce launched another towering homer to left-center in the opening frame off Clayton Kershaw after Andrew Benintendi singled to center with one out.

Let us tell you about Steve Pearce.

David Price, making his second Series start on three days rest, looked as shaky in the opening inning when he gave up a first-pitch solo homer to David Freese, who belted it 402 feet to the right field pavilion bleachers, cutting the Boston lead to 2-1.

Price followed with a walk to Justin Turner before he finally settled in. The biggest pitch Price threw early in the game was his first one to Kike Hernandez, who grounded into a 5-4-3 double play. Price struck out Manny Machado on nine pitches to preserve the lead he was given on the Pearce blast.

The game then settled down for Kershaw and Price before the Dodgers had a golden opportunity to tie the game in the third thanks to a misplay from J.D. Martinez. Freese hit a one-out fly ball to right field that seemed playable for Martinez in right. But Martinez lost the high fly in the sky and it landed behind him on the warning track.

Freese raced to third for a triple. But Price and Martinez worked together to negate the misplay. Price got Justin Turner to ground out on the first pitch to Xander Bogaerts, who held Freese at third. Then Kike Hernandez lofted a fly down the right field line. The ball was tailing to the right foul line and Martinez caught it just before it went into the stands.

Thanks to clinical pitching from Price, the game fell into a lull until Betts snapped an 0-for-13 in the most dramatic way possible. Betts lined a one-out Kershaw slider over the wall in left for his first career postseason home run and a 3-1 Red Sox lead.

J.D. Martinez crushed a Kershaw offering over the center field wall to open the seventh for a 4-1 lead. Pearce launched another homer with two outs off reliever Pedro Baez in the eighth to grow the lead to 5-1.

Price retired the next 14 batters he faced after the Martinez misplay in the third before walking Chris Taylor to open the eighth. Joe Kelly came on and fanned pinch-hitter Matt Kemp on a 98 MPH fastball. Matt Barnes and Chris Sale were warming in the bullpen behind Kelly. But Kelly didn’t need it. He proceeded to blow away pinch-hitter Joc Pedersen and Cody Bellinger to end the eighth.