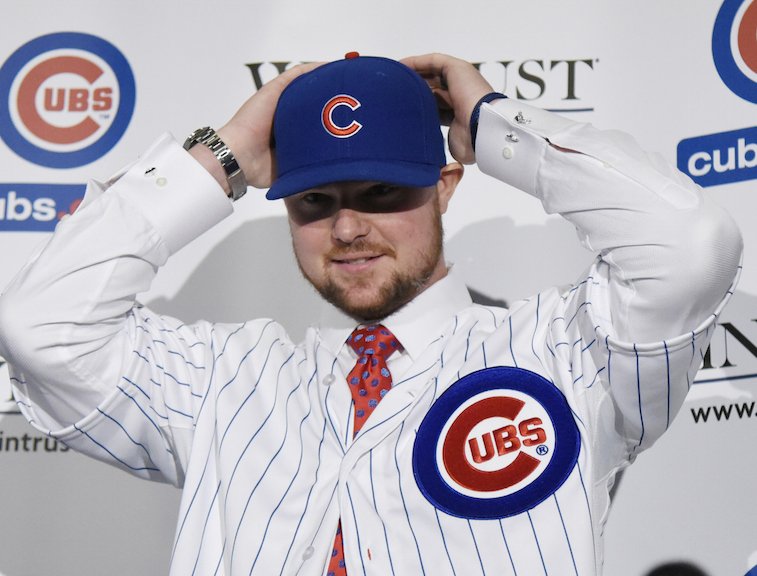 Mookie Betts was a homegrown talent who came through the Red Sox farm system and obviously developed into one of the top three players in baseball. And in the eyes of many, many, many–I could go on–Red Sox fans, they botched the way they handled his situation. The fact that ownership let him go burned the fanbase. We knew it was coming, but that didn’t quell any social media anger. But before there was the Mookie Betts fiasco, there was another one in the form of Jon Lester.

Lester was also a homegrown talent who saw great success with the Boston Red Sox. He turned into a fan favorite and proved to be a postseason stud during the 2013 run where he gave up just one run in two games and 15.1 IP in the World Series. But the Sox front office let him get away. And not only did they let him get away, but they made an embarrassingly insulting offer to Lester ahead of 2014’s spring training to the tune of a four-year extension worth $70 million. So in some ways, what they did to Lester is almost worse. After Lester crumpled that offer up, and tossed it out the window, he was later traded to Oakland during that same summer with his shot at free agency approaching quickly.

And in the spring of 2020, that offer and their inability to beat out the Cubs prior to the 2015 season while Lester sat in free agency, is coming back to bite them right in the keister.

In February of 2019, Red Sox principal owner John Henry admitted their gaff with the Lester talks.

“I think we blew the Jon Lester (negotiations),” Henry said.”We blew it not re-signing him in spring training.”

Lester was someone who admittedly loved being a member of the Boston Red Sox and has even said that essentially, if they played it right, he probably would have remained in Boston on a new deal.

On WEEI’s Hot Stove show, Lester goes on to say that he likely would have signed an extension had they thrown a $120 million offer at him.

In coming to terms with their misfire while Lester went on to continue his strong career in Chicago, the Red Sox acted hastily with Sale prior to the 2019 season. They assured that they wouldn’t let history repeat itself while they threw the lefty a deal of 5-years, $145 million.

Like many rumors, trades and contracts are in Boston, it was criticized immediately. There was injury concern as the team’s ace entered his age 30 season. The same pattern appeared to repeat itself. He’d pitch great for a majority of the year, but as the end of the season would approach, his body had a tendency to break down. So the question became; why sign someone to a five-year extension without seeing how his upcoming season would playout?

During the Red Sox’s 2018 World Series championship season, Sale battled injuries with his shoulder that landed him on the IL with left shoulder inflammation.

His unique throwing motion and the amount of torque he puts on his arm has always drawn concern for his future. But Henry and the Red Sox decided that an extension was the right move. And in 2019–what would have been his final season with the Red Sox before landing in free agency–Sale dealt with more injury. His season came to an end in August with elbow inflammation being the cause.

Elbow injuries and your ace pitcher? Something that you really don’t want to see in the same sentence.

Things seemed positive as spring training approached this February, as long as you ignored the investigation. Sale appeared to be on the right track but had to arrive late after dealing with pneumonia.

But a week ago from Sunday, there were more elbow issues arising from the lanky, left-handed arm. After feeling discomfort, he had an MRI done that didn’t show the need for Tommy John surgery according to the opinions of the Red Sox medical staff, Dr. James Andrews and Dr. Neal El Attrache.

Although none of them recommended Tommy John just yet, that doesn’t mean things are suddenly fixed. What he’s currently dealing with is a flexor strain. Something that could be a precursor to the kiss of death for a pitcher’s season. To put it simply, Sale could end up on the operating table next week, sometime this season, maybe next offseason? At some point, I have a feeling that Mr. John and Sale will be meeting.

There’s no need to say that the Sale extension was a mistake, at least for now. But the fact that there are elbow injuries already proving to be a real concern could be a sign of things to come.

The major miss on Lester is kicking the Red Sox right in the ass five seasons later. Their inability to ink their own homegrown talent, somebody who wanted to be back in Boston, played a key role in their decision to sign Sale before they had to and there’s no way around it. They didn’t want to let another top tier starter escape from their grasp. But we’re now sitting here wondering if that was a mistake. If they allowed 2019 to play itself out and then decided to make a strong push for Sale in free agency, could they have gotten him at perhaps a cheaper rate following the elbow injuries he experienced in 2019? Would they have gone after him at all?

They felt the need to act fast. They felt the need to offer someone who was a major player in their 2018 World Series championship run a contract that would entice them to sign prior to the start of the year. Two things that they didn’t do with Lester. In an attempt to avoid the same car crash they were already in once, they might have acted too soon.

It’s too early to say whether or not their decision to extend Sale was a stupid move. But one thing we do know is that Lester’s exit played a factor in this signing. And as Sale battles injury, my mind can’t help but go back to the fiasco that was the Jon Lester situation.