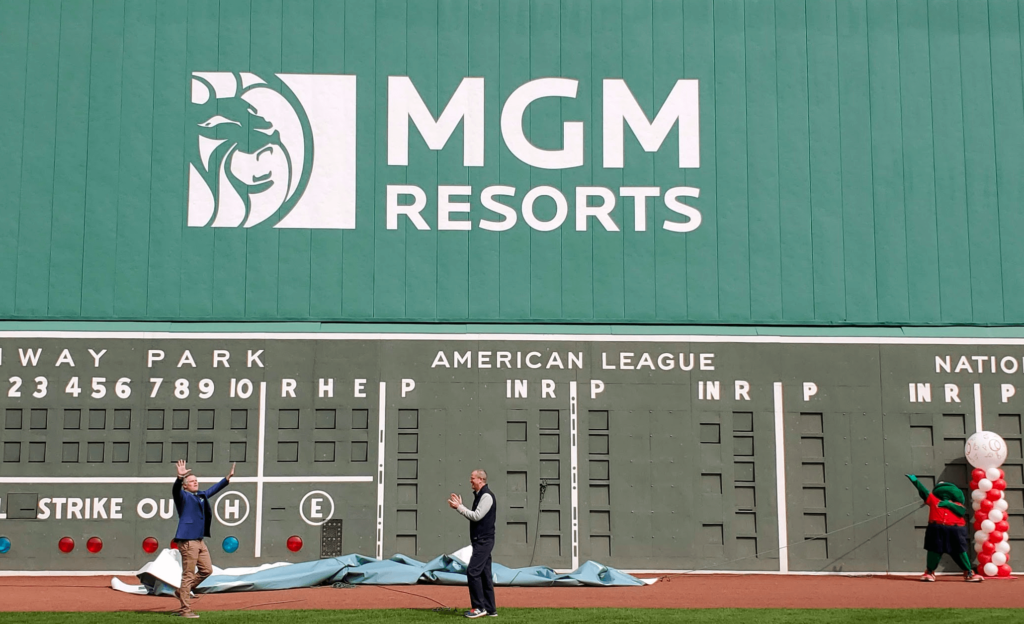 BOSTON — Jim Murren always felt like he was destined to have a place on the Green Monster.

On Friday, his long, lifetime wait came to an end as MGM Resorts, the company he runs as Chairman and CEO, was unveiled as the latest mid-Monster spot on the famed left field wall inside Fenway Park.

MGM replaces another resort and casino, Foxwoods Resort Casino, as the prime player on the Green Monster. As was the case in 2014, when Foxwoods jumped on board with the Red Sox, MGM is trying to capitalize on the World Series championship momentum from the previous season to push attendance and participation at its Springfield (Mass.) casino and resort. The Mansfield (Mass.) medical device company Covidien first made a splash in 2007 when it bought up space on the wall.

“We do not take lightly putting corporate advertising on the most iconic location in professional sports. We were excited to work with a company that is committed to the region,” explained Red Sox President and CEO Sam Kennedy in Friday’s Leo the Lion reveal on the Monster. “It’s great to market to the western part of the state. We’ve had an official resort and casino partnership for some time, obviously working with Foxwoods in the past. MGM has just made a huge commitment to the community. We’ve been working on this relationship for several years and it works for us.”

MGM is in the middle of four other signs, including Jim Beam, Red Sox Scholars, The Jimmy Fund and IBEW 103 & NECA. There are of course other sponsors on the scoreboard of the Monster, including CVS Health, W.B. Mason, F.W. Webb and Optum.

When Foxwoods signed on in 2014 to replace Covidien for five years and a figure believed to be north of $5 million in total value, it was seen as a bold move for the Red Sox to embrace an industry that has always had a very rocky relationship with Major League Baseball.

Dating back to the Black Sox scandal that rocked the 1919 World Series and brought in a heavy-handed commissioner in Kennesaw Mountain Landis to the Pete Rose debacle of 1989 and his subsequent banishment from the game he loved, baseball has rightfully feared any type of formal relationship.

But this is 2019 and the dynamics have changed radically. It’s not just the Red Sox either. Major League Baseball has a working partnership now with the same MGM Resorts International that is buying a place on the Green Monster to drive business to its new Springfield resort.

So, the multi-billion dollar question is why? Why is MLB now embracing the casino and gaming industry.

“There has been a tremendous amount of understanding over the last two decades,” Murren told me Friday afternoon at Fenway Park, just below the brand new Leo Lion logo on the Green Monster. “Twenty-one years ago, I joined MGM and I went home to my Red Sox-fan mom in Fairfield, Connecticut and I told her, ‘Mom, (my wife) Heather and I are moving to Las Vegas, leaving Wall Street.’ And she said, ‘Son, I failed you. If your dad were alive, you wouldn’t do this.’ The whole Catholic guilt thing was going pretty hard.

“Now I can’t get her out of Las Vegas. She goes with her girlfriends. They go to the shows. So, I’ve lived through this journey as it relates to the acceptability and understanding of what the gaming is. We represent millions of jobs here in the United States. These are middle class jobs. We pay very well. We have great benefits. People are raising their families on this industry, which is terrific.”

Murren made it clear to me that there is great, great opportunity in legalized gambling in all professional sports, but only if they have the full cooperation of the leagues and the local states behind them.

“Sports betting has lagged behind that in the United States, and certainly in the rest of the world, where it is commonplace in the United Kingdom and Australia in multiple markets,” Murren continued. “I think that the leagues now understand that a highly regulated, transparent legalized process is vastly preferable to the illicit, illegal activity that has plagued consumers in the United States. And I’ve seen that particularly over the last 3-4 years.

“When the Supreme Court (in 2018) overturned PASPA (Professional and Amateur Sports Protection Act), which had prohibited sports betting in states, we took the approach that rather than to transact with individual technology companies or with sports betting companies, we want to sit down with the commissioners of the leagues because we recognize and they recognize this is now in front of us. We have to figure out how to move forward together to preserve the integrity of the product, which is tantamount, whether it’s Major League Baseball, or transactions I’ve done with the NHL, NBA, Major League Soccer. It’s that alignment of interest.

“It’s incredible that here we are in Massachusetts, where this state passed – surprisingly – a referendum in 2011 to approve gaming. And here we are at Fenway. And I’m aligned with a management team and an ownership group that is incredibly sophisticated in areas of technology and social media and media and that’s why this partnership was very exciting to me.”

And so that’s where the state needs to step in and come through. And it’s expected they will do just that as Governor Charlie Baker has proposed legislation that will eventually lead to legalized sports gambling in the state, bringing in hundreds of millions in potential revenue.

“Yeah, we’d definitely like to see sports betting happen,” Kennedy added. “It’s important for fan engagement. There’s a ton of illicit activity that’s been going on for a long, long time. So, we’ll let the state figure that out. It’s in their hands. We support Governor Baker’s initiative to take it on.”

Could Kennedy envision gambling on mobile phones at Fenway?

“Yeah, I think any way to get people engaged in our sport is a good thing,” Kennedy said. “We just want to make sure we’re working closely with (MLB Commissioner) Rob Manfred and his team and Governor Baker and his team.”

“We’re aligned, in the sense that the leagues (in all sports) and MGM, our first order of business is to preserve the integrity of the product,” said Murren. “Without that, there is nothing to discuss. I feel like working with leagues, and now teams, is a good move but I don’t view this as, “How much money can we make in sports betting?’ I think that’s very myopic point of view. We look at this as an opportunity to a digital experience for the consumer globally, whether it’s on social gaming, sports betting or other forms of digital experience. We’re investing a lot of money in this area to make sure we’re first and foremost in the consumers’ minds when they think of entertainment and sports entertainment.”