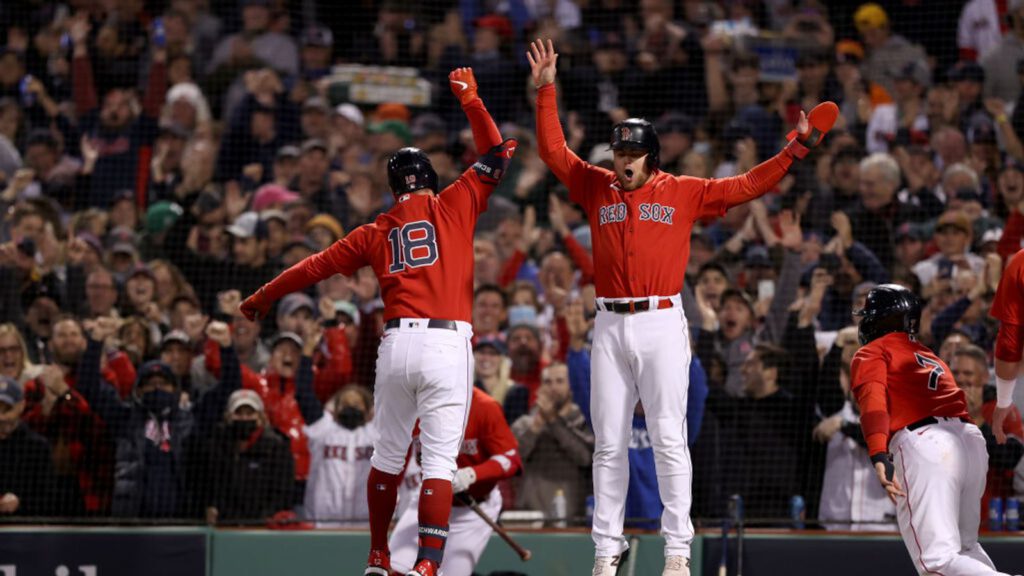 Well, not quite yet. But the Red Sox have the Astros bloodied, battered and on the ropes after a 12-3 blowout win in Game 3 of the ALCS, giving the Sox a 2-games to 1 lead in the best of 7 series.

The big blow in this one? You guessed it, another grand slam, the Red Sox 3rd of the series tying a postseason record. This one off the bat of Kyle Schwarber in a 6 run second inning which chased Astros starter Jose Urquidy after 1 and 2/3 innings.

SCHWARBER SLAM view from the press seats in RF via @John_Zannis pic.twitter.com/wHz4U8q4GJ

The Sox pushed a run across earlier in the inning after Christian Vázquez hit a bases-loaded RBI single. plating Alex Verdugo from third.

The Sox then caught a huge break. Christian Arroyo hit what should have been an inning ending double play ball to second but Jose Altuve muffed it, much to the joy of the Fenway crowd which rode Altuve all game. Altuve’s error allowed a run to score making it 2-0. The next batter Schwarber followed with the slam.

Tonight marked the 3rd straight game an Astros starter has failed to make it through 3 innings and second straight not making it out of the second.

The Red Sox tacked on 3 more on the third inning. A Vazquez single scored Hunter Renfroe who walked, stole second and advanced to third on a throwing error by Astros catcher Martin Maldonado. Arroyo followed with a 2-run homer into the monster seats in left to make it 9-0 Sox.

Red Sox tarter Eduardo Rodriguez did his part. E-Rod went 6 full (the longest by a Sox starter this postseason ) allowing 3 runs on 5 hits while striking out 7. Rodriguez outing was punctuated by a strikeout of Correa to end the 6th after which the Sox lefthander pointed to his wrist and started tapping an invisible watch. A clap back at Correa’s “it’s my time” home run celebration during Game 1.

JD Martinez and Rafael Devers provided some more pad, Martinez launched a two run bomb over everything in left off Astros reliever Phil Maton in the 6th. Devers went opposite field into the monster seats for a solo shot in the 8th. His 4th of the postseason.

Something to watch for the Red Sox going forward. Playoff MVP Kike Hernandez was lifted for a defensive replacement in the 7th inning. No immediate word on why Hernandez was pulled.