The ALDS between Boston and Houston is tied at two games apiece. 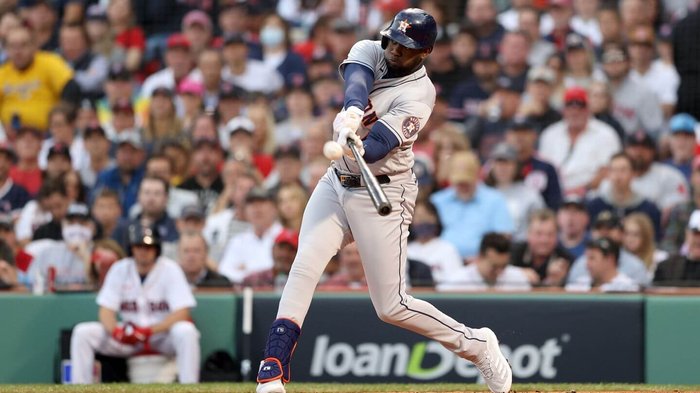 FENWAY  PARK — The Red Sox and Astros are back at it at Fenway Park for Game 5 of the ALCS with the series tied at 2 games apiece.

In a rematch of Game 1 starters it was Chris Sale for Boston, and Framber Valdez for Houston.

2 more Houston runs come across in the top of the 9th courtesy of Red Sox garbage man Martin Perez. Perez also was on the hill in Game 4 in the 9th when Houston blew the game open.

What a start by Valdez. He made it through 8 full allowing only 3 hits, one run while striking out 5.

The Red Sox finally got to Valdez in the bottom of the 7th when Rafael Devers blasted a solo shot down the line in right. That made it 7-1 Astros. Devers now has 26 postseason RBI, the most by a player before the age of 25.

Ryan Brasier came on in relief of Sale with runners at the corners. Yuli Gurriel shot a double to right plating a run making it 4-0. That closed the book on Sale who went 5.1 innings allowing 4 runs on 3 hits striking out 7.

The next batter Jose Siri fisted a 1-2 pitch into shallow right plating 2 more and making it 6-0 Astros.

Jordan Alvarez does it again. His 3rd hit of the night, a double to left, knocked in 2 more runs in the 6th and chased Sale from the game. Sale began the inning with a leadoff walk to Altuve and then Michael Brantley reached on an error by Kyle Schwarber at 1st.

Hunter Renfroe grounded into a 6-4-3 double play on a 2-0 count. The next batter Alex Verdugo got a fastball right down broadway on a 1-0 count and grounded out to first unassisted. Valdez has only thrown 55 pitches through 5 innings allowing just the one hit to Devers.

The Red Sox finally got a baserunner, their first of the game when Rafael Devers lined a single to right. The next batter JD Martinez got hit by a pitch that bounced before striking him in the left leg and we’ve got an honest to goodness rally going.

Astros starter Framber Valdez becomes the first Astros starter to pitch into the 4th inning this series and he lloks like he’s going to last much longer than that. Valdez perfect through 4 innings. He has 4 Ks and every other out has been on the ground.

After allowing a pair of runner to reach with one out in the 4th Sale reached back for a little something extra. Sale blew away Carlos Correa with a 96 mph heater up in the zone. He then blew away the next batter Kyle Tucker throwing nothing but heat and exploded off the mound pumping his fist and screaming into his glove.  Velocity of the 4 pitches to Tucker, 98, 98, 97, 98.

CHRIS SALE IS BACK pic.twitter.com/MlOCqGB88c

After both Sale and Valdez set down the side in order in the first the Astros got on the board. Yordan Alvarez took Sale the opposite way for a Solo home run into the monster seats for his second homer of the postseason