Remembering the Legacy of LeBron James’ “The Decision” 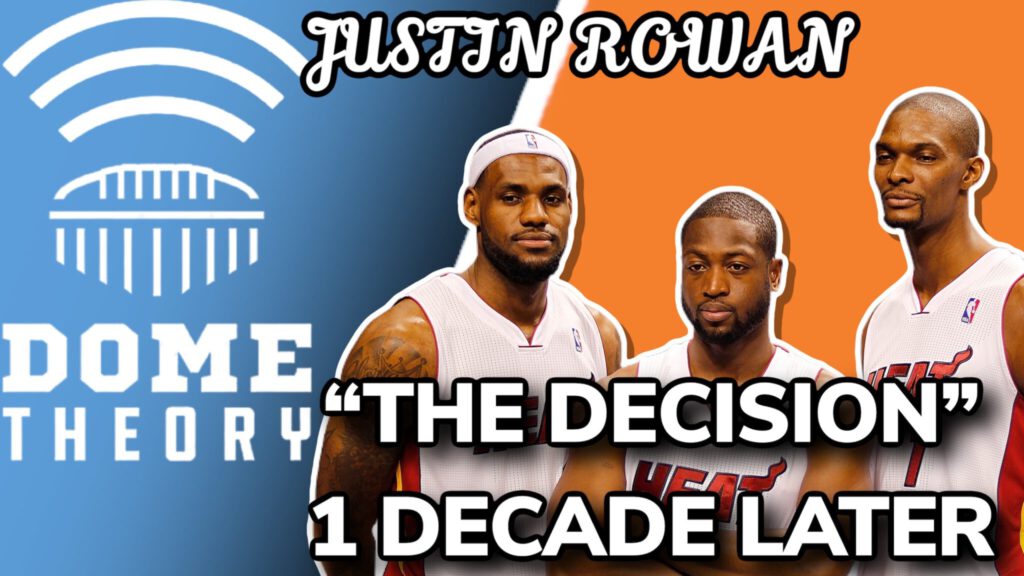 In the realm of sports conversation, we tend to consume what we claim to hate most. While catching a workout in my cousin’s garage, I scrolled through my podcast log last week to see a flurry of conversations marking 10 years since The Decision. Something about that faithful summer day and the fury that followed still captivates the sports world. As one sports podcaster put it, “it turned me off.”

The Decision’s TV special still gains scrutiny and debate from critics claiming to hate what it created. Our CEO Nick Gelso called it the lone mistake of LeBron James’ career. Nobody can argue the decision itself did not make sense though.

James won back-to-back championships with the Miami Heat and evolved as a player before returning to win one for the Cleveland Cavaliers. The branch-off effects of that introduce a long conversation about how it impacted the last decade. We discussed that legacy on Dome Theory Sports & Culture with Cavaliers writer Justin Rowan.

James’ decision set up two of the greatest NBA Finals of all time (2013 and 2016). It prepared the Cavaliers to stab at draft picks until they acquired Kyrie Irving, Tristan Thompson and Andrew Wiggins, ushering LeBron’s return. The San Antonio Spurs built their own pseudo-dynasty off their heroics against the Big Three Heat. Increased player movement that followed emboldened one of the most controversial free agency signings ever when Kevin Durant signed with the Golden State Warriors.

“After Kyrie and Tristan were drafted, I was the one saying LeBron was coming back,” Rowan said. “I was pitching conspiracy theories.”

While many feared an era of Warriors inevitability, it produced a massive influx of hate watching. Instead of shuddering, teams like the Houston Rockets rallied around the challenge of toppling the greatest team ever. The Raptors used Kawhi Leonard’s flex of player power in 2018-19 to win one of the most surprising championships in NBA history.

“It was the ushering of a new era,” Rowan said. “It really ushered in the era of player empowerment … owners, with the CBA, going with shorter contracts. That really enabled players to have a little more power over where they’re going to play.”

The trends The Decision sparked still exist. LeBron and Kawhi Leonard can become free agents in coming seasons. Giannis Antetokounmpo’s free agency next summer is already capturing the imaginations of big markets like Miami and Golden State around the league. His decision, more than any other, will likely set the standard of player movement around the NBA for this upcoming decade.

“I think if Giannis says I’m going to stay in Milwaukee, I’m going to build around them,” he said. “I think that will change the culture of the NBA.”