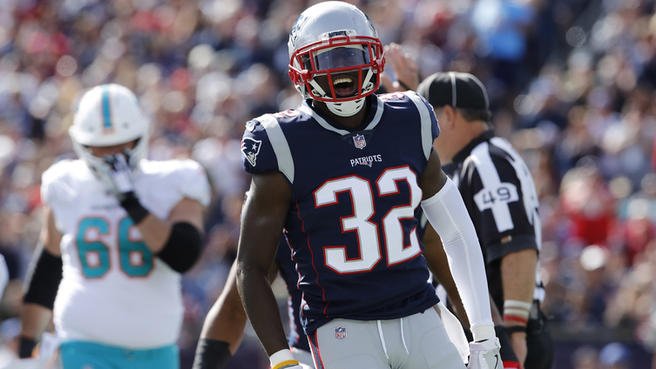 The Patriots and safety Devin McCourty have agreed to a two-year contract, keeping the long-time captain and three-time Super Bowl champ in New England.

The 11-year veteran confirmed the deal that will pay him $23 million over the next two seasons on his “Double Coverage” podcast alongside twin brother, Jason, who will also be back with the Patriots.

Last season, at age 32, McCourty was the sixth-most valuable safety in the NFL according to Pro Football Focus’s wins above replacement metric and finished eighth in overall grade.

DMac INT: #Patriots drop into cover-2. Allen thinks he has Brown on the post splitting the two safeties. DMac opens to the sideline then reads the QB to jump it once Allen releases the ball. Perfectly done. Can't play safety any better than DMac is right now. pic.twitter.com/VctQ3NwCiZ

Rarely out of position, McCourty plays several roles each week in the Patriots defense from deep safety, in the box, cornerback, holding down both man and zone responsibilities.

On and off the field, McCourty, who will likely spend his entire career with New England after this contract, is a consummate Patriot, with coach-like intelligence and contagious passion.

The Patriots defense gravitates towards McCourty. He’s always surrounded by teammates that are picking his brain about football and life; he could retire today and coach tomorrow.

With the McCourty twins and special teams ace Matthew Slater back in the fold, all eyes remain on quarterback Tom Brady and the team’s dwindling cap space that sits at $21 million before McCourty and Slater’s deals, according to Miguel Benzan (aka @PatsCap).

Over the next few months, Bill Belichick has some work to do on New England’s cap situation, with potential space coming in the form of extensions, restructures, and roster cuts.

An extension for reigning Defensive Player of the Year Stephon Gilmore or 2019 Pro Bowler Dont’a Hightower, which could lower their 2020 cap numbers, are two potential options.