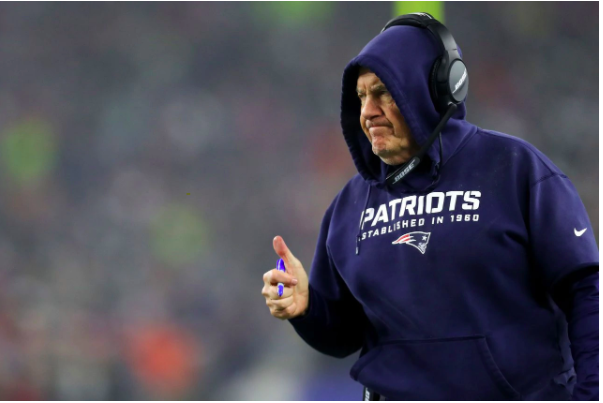 The Patriots got some great salary-cap related news on Saturday, freeing up nearly $7 million in cap space after settling grievances with former players Antonio Brown and Aaron Hernandez.

With @FieldYates, reporting significant salary-cap news for Patriots: Settlements in compensation grievances with Antonio Brown ($4 million to team) and Aaron Hernandez ($2.55 million to team) have created space for the club. The Patriots' current cap space is $7.79 million.

According to ESPN’s Mike Reiss and Field Yates, Bill Belichick now has extra cash in his pocket, improving their cap situation from $1.2 million to now $7.79 million.

Based on projections from Over the Cap, New England had the least amount of cap space in the NFL before Saturday’s news, but now the Patriots are out of the basement.

The $4 million that the team recouped from Brown’s deal came from a $9 million signing bonus that still had one more payment due to the free-agent wide receiver. As for Hernandez, the $2.55 million credit on the Patriots’ cap stems from his final signing bonus installment that the team held onto after his release in 2013.

As far as how the Patriots will spend the money, there are still intriguing veteran free agents available on the market and rumored players on the trading block.

Belichick could also use the money in-house by giving a contract extension to a player whose 2020 cap hit would increase in doing so, such as talented third-year cornerback JC Jackson.

Plus, New England will need a few million dollars in surplus to pay for roster bonuses and players on injured reserve throughout the season and will want cap flexibility for future moves.

Saving the money is no fun, though, so here are a few targets the Patriots could go after:

cLoWnEy oNlY hAd 3 sAcKs #Raiders pic.twitter.com/ntop4nRzIY

Before you tell me to stop dreaming, hear me out. According to ESPN’s John Clayton, Clowney is entertaining one-year market reset offers in the $10 million range to bet on himself in 2020. With their new cap space, the Patriots could offer an incentive-laden deal a la Cam Newton to the former Houston Texan. Last season, Clowney only managed three sacks in Seattle, a sticking point for many teams in negotiations, and hasn’t developed into the pass rusher that evaluators expected. According to Pro Football Focus, he has never topped 64 quarterback pressures in a season, and his highest pass-rush grade of his career was 79.7. Still, Clowney’s versatility and stout run defense are perfect fits in Belichick’s scheme. He can line up anywhere on the line of scrimmage, set the edge, and generate pressure at a high rate on stunts and other schemed pressures. Clowney played in a similar system under Romeo Crennel in Houston, and gave the Pats problems. If they can get him on a bargain deal, giving Clowney to Belichick would be unfair to the rest of the league.

The Browns tight end wants a trade after the team signed Austin Hooper to a lucrative free-agent contract and drafted Mackey Award winner Harrison Bryant in the fourth round. With Njoku, it all comes down to Cleveland’s asking price. The Pats could technically afford his 2020 salary before Saturday’s news ($1.76M), but the Browns are reportedly seeking a mid-round pick as compensation. The Patriots just traded up for both rookie tight ends Devin Asiasi and Dalton Keene in the draft and likely won’t invest another valuable trade chip at the position. However, the former first-round pick has tons of talent and is a clear upgrade over Matt LaCosse. Njoku is a flex tight end known for his receiving skills and creates mismatches with his athletic profile. In 2018, he had 56 grabs for 639 yards and four touchdowns. There’s a tremendous amount of upside with Njoku that the Browns weren’t able to tap into in his first three seasons. But we wouldn’t part with more than a day-three pick for Njoku, choosing to see what the team has in Asiasi and Keene in their rookie season.

The Patriots probably could’ve signed “Snacks” on the cheap already, but the extra wiggle room gives them more freedom to make a move now. As an odd (3-4) front team, the Pats need big-bodied run-stuffers along the defensive line. Harrison is no longer in his prime at 31 years old, but he was once the league’s best run defender as an old-school nose tackle. Under Matt Patricia in Detroit, Harrison played in a similar scheme with two-gapping principles and Belichick-like techniques for the defensive line. The Pats already have Lawrence Guy, Beau Allen, and Adam Butler, who is emerging as a run defender, but could use another big-body. If Harrison can return to his 2018 form, he’d be a useful player for the Pats.

Nine-time Pro-Bowl OT Jason Peters, who turned 38 in January, has been working out to play this season and plans to play this season. He has spoken with the Eagles, but is keeping his options open: This is a video that Peters recently shot that he wants teams to see. pic.twitter.com/YnrWzZ44FD

The Patriots are returning starters Isaiah Wynn and Marcus Cannon at tackle, but their depth beyond 2019 third-round pick Yodny Cajuste is lacking. Plus, Cajuste still hasn’t gone through an NFL practice yet as he sat out his entire rookie season due to injury. A lot is riding on Cajuste being a serviceable swing tackle, or trade acquisition Korey Cunningham who couldn’t crack the rotation despite Wynn and Cajuste’s injuries a year ago, so the Pats could add a veteran. The 38-year-old Peters played in 13 games for the Eagles last season, still wants to play in 2020, and looks great in workout videos sent to teams. Even at his age, Peters graded out as the sixth-best tackle in football in 2019, according to Pro Football Focus (83.4). As a former college tight end, Peters’s movement skills and pass-blocking have always been among the league’s best, allowing only 25 quarterback pressures last season. Peters makes some sense on a one-year deal as a veteran backup and mentor for Wynn.

If the Pats don’t want to go with Peters, Beachum presents another veteran free-agent option worthy of an NFL roster spot. He had a bit of a down year in 2019 for the Jets, but only allowed 28 total pressures the year before. The 31-year-old knows what he’s doing in the trenches by varying his hand techniques and studying his opponents to come up with a plan. In 2018, Beachum had an excellent performance against Browns pass-rusher Myles Garett that shows you what he can be when he’s on his game. Like Peters, Beachum could be a reliable veteran backup that won’t put the Patriots in another Marshall Newhouse-sized pickle if Wynn or Cannon goes down.