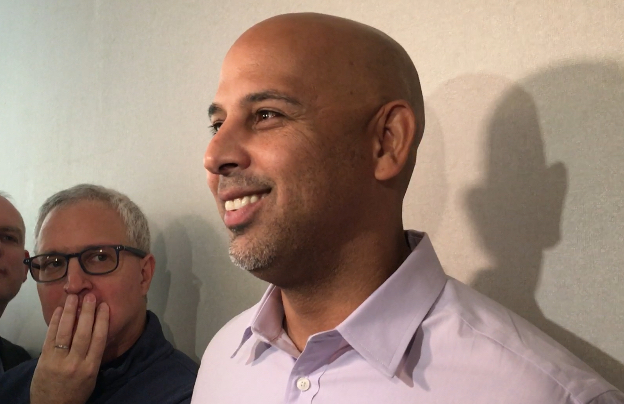 BOSTON — Alex Cora has always had the right message for the right time. That’s one of the qualities that Red Sox ownership saw in him as he left his job as bench coach for the 2017 World Champion Houston Astros.

One of the first messages he delivered to the 2018 Red Sox came before the team opened camp in Fort Myers. He convinced a good team (back-to-back AL East titles) to be hungry for more. He told the group in Fort Myers that he would let them be themselves. There would be no micro-managing.

There would be a different vibe in 2018. He would be hands-off for the most part, with one condition. Buy in. If the players in the clubhouse would buy in to how he and the coaches wanted the game played, the players were free to be themselves.

Cora, who played on the 2007 World Series champion Red Sox for Terry Francona, understood very well the importance of setting a tone and messaging before the team threw one pitch or took one swing with purpose in camp.

In his rookie year as a major league manager, Cora won a franchise-record 108 regular season games, he lost just three postseason games in 14 tries and captured the club’s fourth World Series title of the 21st century.

What will and can he do for an encore?

“You guys might write this somewhere, I don’t care. If you thought last year was special, wait till this year,” Cora proclaimed Thursday night at the Boston Baseball Writers annual Winter dinner.

Those words flow from someone who has demonstrated sure confidence that comes with proven success. That attitude will no doubt be on full display in Fort Myers in a month when he gathers the team at the start of camp and plants seeds in their minds and sets clear expectations for 2019.

“We’ll challenge them,” Cora told me. “One thing about this group – and that’s the cool thing – throughout the offseason they’re staying locked in. It’s hard to believe. I sit down at home sometimes and think it’s not possible. When we text (with players), when we call, when we talk about next year, yeah we’re celebrating, we’re enjoying the whole thing but it looks like they turned the page about a month ago, and they’re locked in.”

What evidence does he have of that?

Pitching coach Dana LeVangie traveled to Fort Myers in December just to get together with snowbirds Chris Sale, David Price, Matt Barnes and Jackie Bradley Jr., spend parts of the winter relaxing in the warmth near the camp complex.

“(Pitching coach) Dana (Levangie) went to Fort Myers about a month ago and met with Chris and David and Jackie and Barnes, it’s business as usual. I’m looking forward to being in front of the group and talk to them.”

The biggest question mark – by far – impacting whether the ’19 Red Sox can repeat is the strength of the team in the World Series win over the Dodgers. The bullpen has lost Joe Kelly to the Dodgers. Nathan Eovaldi is returning to the Red Sox rotation. And unless Dave Dombrowski goes back on a promise not to sign a big ticket closer or Craig Kimbrel relents and accepts a hometown discount, there will be a new closer at the backend of the bullpen.

“We’ve got some capable guys and we can maximize the guys we have,” Cora said with equal parts confidence and faith.

Cora has more than earned the right to ask fans to be patient as the bullpen question marks are answered. There’s Matt Barnes, Ryan Brasier, Heath Hembree, Steven Wright, Tyler Thornburg, Brandon Workman, Bobby Poyner and Marcus Walden. Whatever you think of that group at the start of spring training, Cora’s message to fans is wait and see (like 2018) how it plays out.

“We had a meeting – very eye-opening – with the analytic department and there was a lot of stuff we’re going to implement next year. We do feel that, yeah, there are guys that can get outs in the ninth inning and guys that can get outs in the seventh and eighth innings. People get caught up in what (the Yankees) are doing and we knew they were going to make moves (adding Adam Ottavino, Troy Tulowitzki, DJ LeMahieu). They have a great bullpen, obviously.

“We have a great rotation. It balances out. It’s our strength. It was last year. Going into the season last year, there were a lot of questions about the bullpen and the guys did an outstanding job. If that’s the only question we have, then so be it. We do feel we have a good team.”

And on Monday, Feb. 18, before the first full squad workout of the defending world champs, he’ll remind that good team that the next level of greatness comes with defending its throne. How he goes about delivering the message will be part of the reason fans should pay attention early on to the 2019 Red Sox.