Rest Easy: Why Celtics Should Shut Down Kyrie Irving Until Playoffs 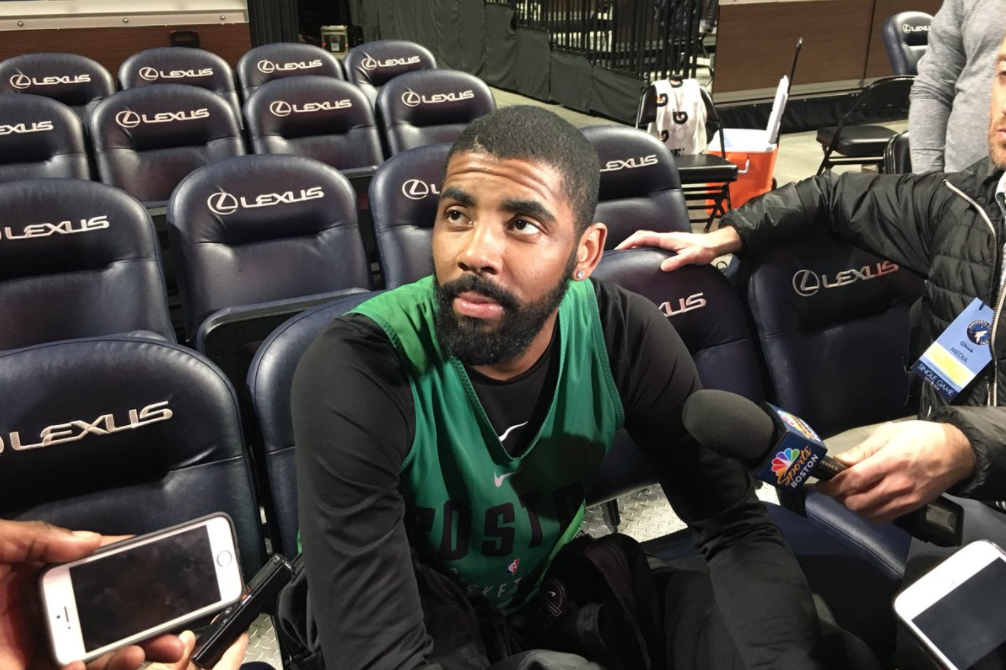 BOSTON — Forget about the No. 1 seed in the East. Forget about getting into a rhythm for the postseason run. What the Celtics need to do now is rest Kyrie Irving until mid-April.

That decision seems an obvious one to Brad Stevens now that the Celtics best player took himself out of the game at halftime of Sunday’s 99-97 loss to the Pacers. The Celtics sit 46-21 and solidly in second in the East. They are 3.5 games back of Toronto and seven games clear of Indiana for third, even with Sunday’s loss. They’re all but locked into second in the East.

“I had no idea, but at halftime he was talking about it, felt some soreness in it, probably similar to the Houston game in the third quarter, and was getting it worked on after halftime,” Stevens said. “We don’t know what it is above general knee soreness and I think that’s the case, but we will go and get as much testing as we need to.

“We think it’s general knee soreness and he doesn’t seem overly concerned big picture wise with it, but it’s obviously been giving him fits here and there for the last five to eight days or so.”

That Stevens diagnosis was confirmed by Irving himself Sunday night.

“It’s sore,” Irving admitted. “(It) started in Houston, it was aching so I thought a few days usually it just subsides. It’s been aching for a little bit so I’m just going to do whatever necessary to get back where I need to be to feel comfortable.”

Take your time Kyrie. The Celtics don’t need 75 or 80 percent Irving to try and catch a Raptors team that has been sprinting from the Celtics for nearly two months. What they need, if they’re to have any shot at even reaching the Raptors in the East finals, is Irving rested and healed.

Irving sat out three games in late January and early February to rest the same knee. He came back stronger than ever, averaging 24.2 points and 5.9 assists in the 10 games heading into Sunday’s game. Three times he scored over 30 and he’s been sizzling from beyond the arc, shooting 43.2 percent.

With Irving, the Celtics are capable of getting to the NBA finals. Without him, the odds are very, very long.

What’s most encouraging about Irving is his remarkable sense of self-awareness with regard to his physical well-being. In another time, this might come across as self-importance or elitist. Critics would say that Irving should just “tough it out” and find a way to get on the floor.

But we’re not in the era of Larry Bird lying on the floor of the plane or sidelines to stretch his back or Kevin McHale icing his broken foot for 5-10 hours just to try and slip his aching, throbbing foot into his shoe. Granted McHale and Bird suffered through pain in the playoffs but the point is there is much more emphasis on preservation for the postseason now than ever before.

Irving isn’t going to risk his availability in the postseason if he’s not ready to go full strength for the final four weeks.

“Where we are going this season I’m pretty comfortable,” Irving added. “Competitively, I think that’s what I’m more or less concerned about its just when I actually do get back on the floor and how good I want to feel. The level I expect myself to play at and I want to play at and being able to sustain it. Right now I’m going to deal with that.”

Irving’s self awareness has made it really easy for Stevens to manage the situation. He doesn’t have to fight the player to sit him and heal.

“We would have done that anyways coming into (Sunday’s) game if we thought that that was going to be the way it was at the end of the day for sure,” Stevens said. “If he doesn’t feel 100 percent, then we need to have him sit and so I think that that is something that we’ve all talked about and why he didn’t come back in.”

To start the second half, the only two starters the Celtics had on the floor against the more athletic Pacers were Jayson Tatum and Aron Baynes. Jaylen Brown is out for a while in concussion protocol. Al Horford was sick and Irving’s knee was balky.

“Obviously, it was a tough situation for our team,” Stevens said. “I thought they took the steam out of us a little bit in the third quarter, but our guys battled and gave us a chance. It is a pretty resilient group we’ve got, pretty cool.”

“I actually didn’t even know Kyrie was out until we were getting ready to start the third quarter,” said Smart, who started the game in place of Brown. “That’s definitely hard. We’re down, we’re down Jaylen and we lose another key component to our team and we just tried to figure out ways to keep ourselves in it.”

The pretty cool part is that with the likes of Daniel Theis, Marcus Morris, Shane Larkin, Marcus Smart and Terry Rozier, the Celtics still found a way to hang in and nearly pulled off a miracle ending.

No disrespect to Rozier, Smart, Larkin, et. al, no Kyrie, no ring. No Kyrie and the Celtics are likely looking at an uphill battle just to get out of the first round.

“Yeah, we’ve got to get Kyrie feeling great, we’ve got to get Al feeling better, got to get Jaylen Brown back, we got a lot of work to do here with regards to training staff and health,” Stevens conceded. “Again, none of those things seem to be long term concerns, but we are going to make sure that obviously we’re very alert. As we said, if he could’ve kept going, but it was less than 100 percent that wouldn’t have been worth it right now.”

This is a team that seems to be limping to the homestretch. Daniel Theis, a huge and emerging part of the bench, is reportedly done for the year with torn knee meniscus.

Sources: Celtics center Daniel Theis has suffered a torn meniscus in his left knee and will undergo season-ending surgery. Theis emerged as an important reserve for Boston this season.

Add in Irving’s knee, Brown’s concussion and – apparently – Smart’s right hand, which he said feels like a “sprain” after Sunday’s game, and you see the looming crisis.

“It’s just something that we’ve seen all year, man goes down, something happens,” Rozier said. “Everybody’s got to step up. Losing a guy like Kyrie is always tough, but we just always cover for him as much as we can, try to play as hard as we can.”

Morris hits Irving with a perfect pass for two! pic.twitter.com/cvPSbqDMMp

There isn’t much you can do about the kind of injuries that are besetting the Celtics right now. It’s all about how you respond and manage them. Danny Ainge restructured nearly the entire training staff last season with the emphasis on more rest and flexibility come playoff time. Stevens in training camp last summer even stressed how he was going to make sure players were properly rested during the season and not over-worked come the spring, when the games mean the most.

Now, with a playoff berth already clinched, there’s no need to worry about where you finish. It’s how you finish. This team is in dire need of rehab at the end of a season that has been filled with overachievement in light of Gordon Hayward’s ugly left foot/ankle fracture on opening night.

So, get ready for a heavy dose of Rozier, Larkin and Smart in the backcourt and Morris and Greg Monroe in the front court. The wins don’t mean as much as health at this point.

“Well that is going to be a priority anyways,” Stevens said. “At the end of the day that is what we want to be. I think the one thing that we got to do a great job of staying in the moment and talking about the next game. The reality is we still have 15 games left, still have sixth of the season left. I do think that we need to be healthy, there is no question about it and again it was the reason why Kyrie didn’t come back in the game is because we didn’t want him to push it, it wasn’t a good move and hopefully we get those other guys back as soon as possible.”