ROB GRONKOWSKI limited as he practices in pads, Bill Belichick says tight end is ‘working his way back’ 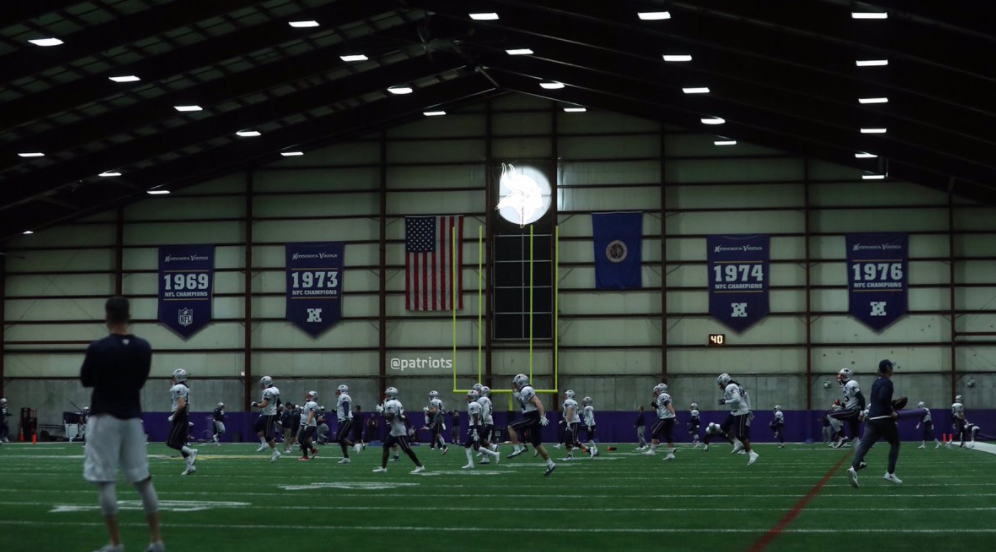 It’s rare that Tom Brady gets overshadowed. But Wednesday, as the 4-time Super Bowl-MVP, wearing only black tape on his injured right (throwing) hand, practiced in full and led the offense through passing and red-zone drills to start, all anyone on the outside of practice wondered about was the status of Rob Gronkowski.

By his side for much of the workout was tight end, who will practiced in pads and was listed as limited as he works his way through the concussion protocol.

Belichick clarified the pool report at the opening of his Wednesday press conference, indicating that the team placed Gronk in the non-contact red jersey on Saturday and Sunday in Foxboro but was good to practice in pads on a limited basis on Wednesday.

As Gronkowski makes his way through protocol, he was again not available to reporters for Wednesday’s Patriots media session at the Mall of America.

The Patriots worked on several 11-on-11 situational drills as they began their on-field prep at the Vikings practice facility in Eden Prairie, leading up to Sunday’s game with the Eagles.

EDEN PRAIRIE, Minn. — The New England Patriots kicked off their Super Bowl week of practice with their first and only fully padded session Wednesday afternoon at the Minnesota Vikings’ Winter Park indoor facility.

And at Week 20, they seemingly haven’t missed a beat.

Quarterback Tom Brady, wearing only black tape on his injured right (throwing) hand, practiced in full and led the offense through passing and red-zone drills to start, then situational 11-on-11 football.

By his side for much of the workout was tight end Rob Gronkowski, who will practiced in pads and was listed as limited as he works his way through the concussion protocol.

“We red-jerseyed him today so he’s working his way back,” Belichick said.

The up-tempo practice was similar to most other Patriots practices, with receivers running routes and catching deep balls from Brady to start. The offense transitioned into a red-zone period, then went straight to 11-on-11, with the noise cranking up before every snap. Special teams took over for kick returns, and later field goals. After additional 11-on-11 work, Brady and the offense closed it out with a two-minute drill.

The location might have changed. The opponent too. But the Patriots’ schedule remains regimented, with morning meetings, weights and practice, then additional team meetings and media availability to follow at the team’s hotel attached to the Mall of America.

The Patriots will return to the Vikings’ facility for practice at the same time Thursday and will have two more daily sessions before Sunday’s game.

Trags, Toscano, Molyneaux on the keys to a Patriots win in Super Bowl LII