Rob Gronkowski Shows Again Why He is the GOAT 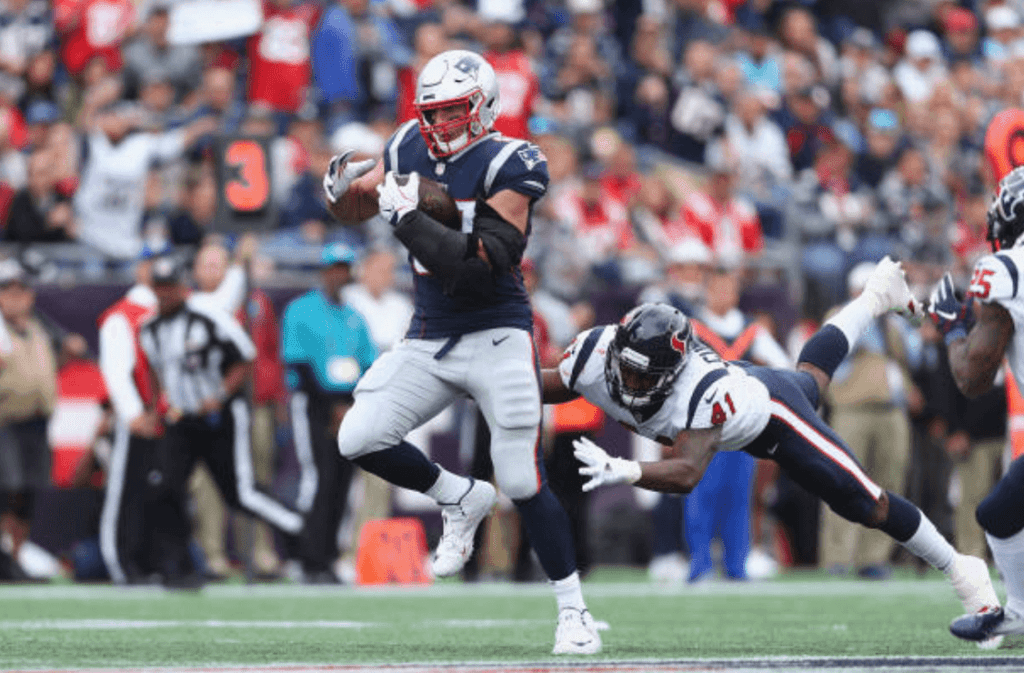 FOXBORO — The Patriots can thank their lucky stars that Rob Gronkowski loves playing in New England so much.

Sunday was yet another example of why, with the most powerful and dominating tight end of his – or any – era, Tom Brady and the Patriots offense will again be able to cover the warts of any other deficiencies on offense. As prolific as Tony Gonzalez was, no one at the position has done for a single quarterback what Gronkowski has done for Tom Brady.

Gronk is the human eraser, wiping out linebackers, safeties and Patriots mistakes, sometimes in one big swipe. Indeed, that decision by the Patriots to sweeten his contract before the season by adding $1 million in per-game bonuses and $3.3 million in potential incentives to his $8 million salary looks very wise right now.

To summarize, the Patriots tight end caught seven passes on eight targets Sunday for 123 yards and a touchdown in a 27-20 win over the Texans. He was running seam routes as well as ever and when the Patriots needed him the most, Brady looked his way.

Early on, the Patriots were on the verge of squandering a Texans turnover that put the Patriots offense, coming off a game-opening 3-and-out, at the Houston 19. Facing a 3rd-and-12 at the 21, Brady fired a dart to Gronkowski at the Texans 2. Gronk steamrolled linebacker Zach Cunningham and then beat Kareem Jackson to the pylon for the touchdown and a 7-0 Patriots lead.

That gave the tight end and quarterback 76 touchdown connections, second-most all-time among quarterbacks and tight ends.

Gronk was far from finished. Late in the second quarter, with the Brady looking for the big play down field, he looked for who else but his star receiver, even if Gronk himself might not have thrown it to him.

“Yeah, when I was running up the seam I had two guys on me and when I saw the ball in the air I literally thought first thing, ‘What is Tom [Brady] thinking?’ When that ball was in the air I had a guy grabbing me and I was just like,
‘I’ve just got to go for it.’ I can’t let them make a play on it, so just went up for it, made the catch. I did make the catch,” Gronk told me. “I don’t know how. When I went to the ground I had it stable in my hand, so it was definitely a catch, but Tom went up to the line really quick just to make sure. We got the play off, which was nice.”

“We see it quite a bit every day. That’s two great players,” Bill Belichick noted afterward. “Both have a lot of skill, both very good at what they do. They don’t need a lot to complete passes. We see that every day in training camp and in practice. They’re both really good. Rob’s hard to cover and Tom can put the ball where only Rob can get it and Rob can get a lot of those. I’m glad we have them. They’re both great players.”

Gronk might have been sure of the catch but the Texans weren’t, at least after the game.

“I mean, we’re playing in New England, so you know that that means,” Texans defensive back Aaron Colvin said.

But Texans coach Bill O’Brien, with three time outs, didn’t call time to allow New York time to buzz the field officials (which they did) and review the play (which they didn’t) because Brady rushed the team to the line and got another play snapped.

Brady connected with Gronk on two other brilliant seam routes, one of which he was stripped of the ball and fumbled, proving he is indeed human.

“Yeah, I just made the catch and then, I don’t know, I just caught it looking up the field and you’ve just got to be aware, I mean, these players in the NFL are fantastic,” Gronk said of the third quarter fumble. “Everyone is fast, everyone is quick and everyone knows how to get at the ball and try to strip the offensive players with the ball. I’ve got to do a better job with that for sure and it’s going to start with practice to get better with that.”

What was on display again Sunday was the incredible cohesiveness between quarterback and tight end. Remember the second half of Super Bowl LII when Gronkowski took over and the Eagles had no answers at all? Sunday had that feel whenever Brady had the time to get the ball downfield to No. 87.

“Rob and I – we’ve been playing together for a long time,” Brady added. “I remember a couple years ago, we threw like in April one year, and I mean we threw like 40 passes. We hit them all. So, I know his body language. I know his ability to run and what routes. He can do it. He can do really all the routes. It’s just a matter of giving him a chance, and it came with a big touchdown today. But, all the guys – the backs played well, receivers, guys who were in there did a good job. So, it’s one win. We’ve got to do a lot better. We’re going to try to this week.”

And of course, this is Rob Gronkowski we’re talking about. There will always be speculation about how long he’s going to be playing. Before Sunday’s game, Ian Rapoport of the NFL Network reported that Gronkowski made it clear to the team in the offseason that he wanted to play only for the Patriots, something he was again asked after the game.

“I was wondering why they asked me that on the field right after the game,” Gronkowski said. “I was like, ‘Where is this coming from again?’ No, I’m just glad to be here, glad to be part of this team, glad to be part of this organization and all that talk, all that stuff, I mean I would love to put it in the past. Whatever it is, whatever reports keep coming out because I’m here and I’m here to stay and I’m here to keep playing ball with the Patriots and just enjoying my time here.”

And that is sweet music to Patriots fans everywhere. And, oh yeah, to his quarterback, too.