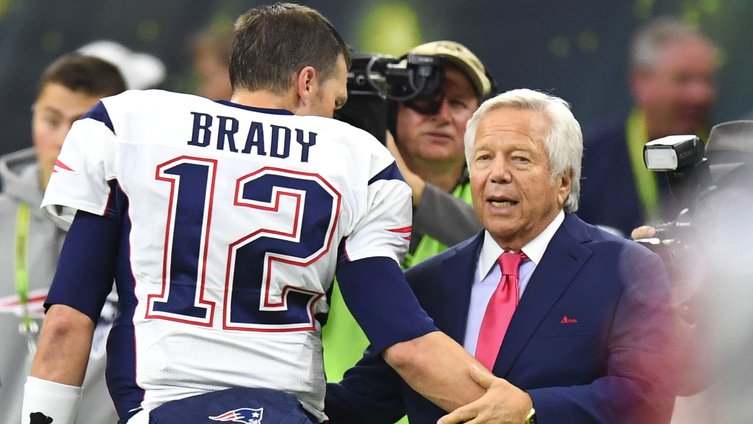 Following Tom Brady’s announcement on Tuesday morning that he’s moving on from the New England Patriots, owner Robert Kraft is sharing details on the situation.

Kraft told ESPN that Brady talked with him in person Monday night and shared his desire to continue his football career elsewhere.

“It’s not the way I want it to end, but I want him to do what is in his best personal interest….I love him like a son,” Kraft said.

Robert Kraft to ESPN: "Tommy initiated contact last night & came over. We had a positive, respectful discussion. It's not the way I want it to end, but I want him to do what is in his best personal interest. After 20 years with us, he has earned that right. I love him like a son"

This wasn’t a mutual parting of ways, either. On First Take this morning, Kraft called Stephen A. Smith during a commercial break to make it abundantly clear that this was Brady’s decision to leave, stating: “If Tom Brady wanted to stay we would’ve worked it out, and he would’ve remained a New England Patriot.”

Kraft also told Mike Giardi of NFL Network that he would have made a deal with Brady if he didn’t think the QB already had his mind set on playing for a different team. It was reportedly an incredibly emotional conversation that ended on good terms.

Robert Kraft told me "if Tom wanted to remain a Patriot, we would have had a deal." Said Brady believes it was best to turn the page and start a new chapter of his life in football and beyond. #Patriots @nflnetwork

Just got off the phone with #Patriots owner Robert Kraft. Described the meeting with Tom Brady last night as "very sad." Said they both were unable to keep it together emotionally but calls Tom's decision to leave as "amiable "

So whether it was his ego, his family or the intrigue of new opportunity that drove Brady out of Foxboro, it’s true that the Patriots organization wasn’t ready to give up on the 42-year-old quarterback. And that might be the toughest thing for fans to swallow.