The Celtics called on Robert Williams III to show up and become more. They know his breakout could be a short-term solution and long-term ceiling raiser. 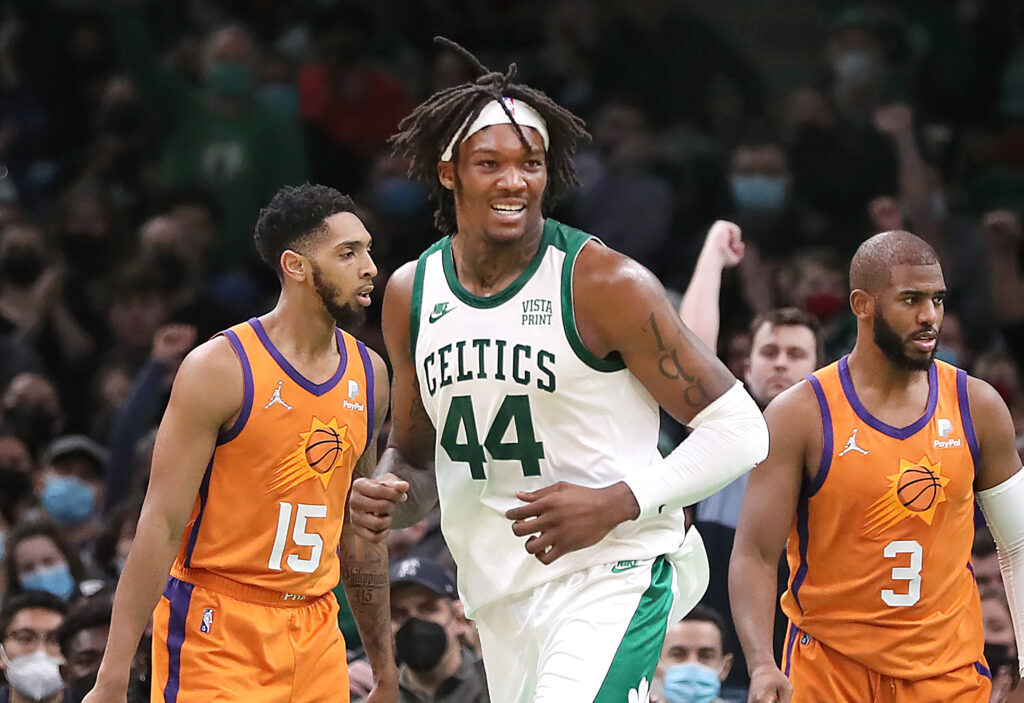 BOSTON — The Celtics lost, 99-97, to the rebuilding Spurs following a late meltdown offensively in the fourth quarter. Jaylen Brown had just missed several key layups late, including the potential game-tying look inside to force overtime as the clock expired. Marcus Smart and Jayson Tatum attacked the San Antonio’s defense head-on. Brown, asked for a solution, had one this time. Put the ball in Robert Williams III’s hands.

Several weeks ago, Ime Udoka submitted a challenge to the team that Williams III took personally. Show up.

Udoka saw players sitting out games over soreness and non-COVID illness. Williams, known for his absences, missed nine of Boston’s first 38 games, including Sunday’s win over Orlando with a toe ailment. He had just posted his first career triple-double on Friday against the Suns, and at his best could be the last remaining internal hope for a third star to emerge alongside Brown and Tatum. One who makes the game easier for them.

“Not being injured and being available is the first part,” Udoka said, grinning, pregame on Wednesday. “We speak a lot privately and I think he took a lot of what I said directed at him, based on past years. Although it was just the team in general, what I mentioned, guys sitting out with with soreness, congestion, things that in the past guys normally wouldn’t … if it upped his pain tolerance, we’ll take it.”

Williams III quietly ranks eighth in the NBA in win shares per 48 minutes (.228), a stat perhaps inflated by his gaudy FG% playing center, but nonetheless impressive since his usage (12.3%) remains below his 2019-20 mark when he sparingly played. Udoka recently discussed how much more Williams III can become, better than even Udoka expected as a passer when he became Boston’s head coach.

Williams III sounded surprised too. More needs to happen quickly, and consistently, for the Celtics to get off the ground this year. Never mind rise back to contender status in years to come.

It’ll take two. First, the Celtics need to consistently look for him. He should probably touch the ball at least once every possession to prevent strict isolation play. Right now, he’s only receiving 36-37 passes per game. His possessions in the pick-and-roll should increase significantly, as I wrote last month. All he needed to carve Phoenix up on Friday was opportunity and consistent cutting from Brown, Smart and Grant Williams.

“Just putting (Rob) in different positions,” Udoka told CLNS Media at practice on Friday regarding utilizing Williams more. “At times, Al is an asset out there as a passer as well, so we’re kind of mixing it between those two guys, but we have specific sets to get those guys the ball and then get the ball moving off of them. He’s going to do what he does in his pick-and-rolls, and that’s a big piece of what we do, but as you saw lately, we want to get more toward some movement off-ball and I think we can really be good at that as we improve throughout the year, so putting him in those positions. Obviously, there’s ATOs you can draw up to get those looks as well, where he’s getting touches out of the mid-post or the elbow and then getting our split game going there.”

The Williamses should also appear more often together than Al Horford plays with either, as Horford’s three-point shooting and overall effectiveness dips. The Horford-Williams pairing (-22.3 since December began) sputtered again with the starters fully back, while Grant and Rob post a 108.9 offensive rating as a duo in that span.

Splitting Williams III and Horford would allow both to stagger their minutes, similar to how Udoka does with Brown and Tatum, keeping a playmaking big on the floor and naturally reeling back Horford’s minutes. More Smart minutes on the ball bode well to connecting and involving Williams III more often, as his most consistent P&R and passing partner.

As for Williams III, he’ll find Smart too. The razor thin margins he sheds in the passing lane are special. It says something that he and Nikola Jokic have the only triple-double games at center this season. There’s still miles between the pair that Williams III needs to bridge by adding dribbling, some semblance of a face-up game to threaten from the high post and an ability to go up with shots effectively from a stationary position in the post. That’ll help him score following his many offensive rebounds.

There’s a world where Williams III becomes an all star. It’s an offseason transformation away, but the Celtics can point him toward that direction now, and a better one for the team in the short term, by involving him more consistently. And not with sloppy lobs like this one from Brown or the dump-off by Schröder later in the game on the right block that Williams III couldn’t do anything with except kick out.

“Rob is a huge part of our team and will play a huge part in our success depending on how far we want to go,” Tatum told CLNS on Tuesday. “We all know that and he knows that. I think for him to just be more aggressive and assertive in whatever he does on the floor, and understand the impact that he has on the game and on our team and how much we need him to be as special as he is.”

The Spurs started to understand that, to a lesser degree, with Jakob Poetl late in Wednesday’s game and found him repeatedly when Williams III switched to the perimeter and Boston ramped up the pressure on a streaking Dejounte Murray. Tatum and Rob should be able to generate similar leverage that completely frees up one or the other. This was the best set the Celtics ran late in the fourth quarter, and it wasn’t difficult at all.

Add Brown into the mix on the same space on the floor and even Draymond Green and the vaunted Warriors defense didn’t have an answer on this play.

Williams III, who already neared a 10-block game in the playoffs, owns physical, vertical and length advantages over nearly all his contemporary bigs. He’s thrown down dunks on Giannis Antetokounmpo, neutralized Zion Williamson and thrown magical touch passes from the post to the corners only Jokic could equally dream of. He doesn’t seem to realize his powers, content to simply help out rather than lead.

“I’m realizing the team needs me,” Williams III said. “As far as being an anchor defensively … they expect communication out of me. I’m a starter on this team for a reason. Just knowing that they trust me enough to take what I’m saying … shit, (Ime) believes in me a lot. I guess he sees something in me I don’t. I’m thankful for the way he pushes me every day, trying to get that out of me I guess. It’s just an honor to have him talking like that, but obviously it’s more I gotta achieve.”

It took “an act of Congress” to convince Williams III to leave his hometown to join an AAU program. He’d stay one week, then turn around content he showed his promise. At Texas A&M, he initially refused to become a starter over an older veteran who couldn’t believe it took so long for Rob to supplant him. It felt that way at times last season when Daniel Theis and Tristan Thompson played ahead of Williams III, who ended up leading the team’s best stretch of play all season when he became a starter. More is always possible for him.

The Celtics have an answer to many of their problems if Williams III can provide it. In crunch time. Finding their third star of the future. It needs to happen now though, before the team needs to take more drastic action to address the deficiencies weighing on them.

“I think even in this game, when we went on good offensive stretches, the ball was coming from Al, coming from Roh,” Brown said Wednesday. “We were cutting, setting screens and taking advantage of some of those actions and how they were guarding us. Then we kind of went away from that. We’ve got to make teams pay, we can’t just be out there playing basketball. We gotta read the game a little bit better. Tonight was a tough loss. I smoked a f***ing layup, but I’ll bounce back tomorrow.”