Robert Williams made key defensive rotations, caught a lob and most importantly energized the Celtics toward a Game 3 victory and 3-0 series lead. 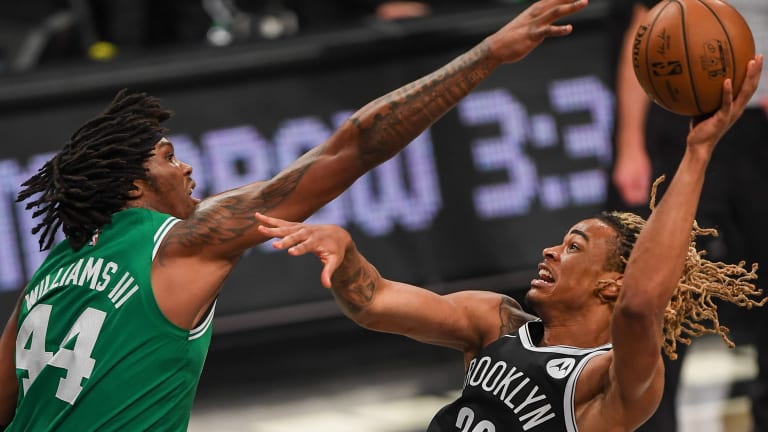 NEW YORK — Steve Nash didn’t seem phased by Robert Williams III’s return for Game 3 with his Nets down 0-2 returning to Barclays Center. Nash told reporters at shootaround that Williams’ return doesn’t change anything that the Celtics are doing. True in concept. Less in impact.

The Celtics suppressed excitement at their own shootaround too, but all week their optimism grew beyond containment. Multiple reports pointed toward his availability less than four weeks following his meniscus surgery, and by Saturday morning, Ime Udoka still wouldn’t commit to him being available. He did assert that whenever Williams III did return, he already resembled himself, with all the dunking and athleticism in scrimmages. They’d simply observe how he acclimated to game speed.

Game 3 inevitably marked Williams III’s return to action after tearing his meniscus on Mar. 27, coming off the bench for 5-6 minute bursts in each quarter. In the handshake line leading into tip-off, he hugged Daniel Theis and shoved Grant Williams toward midcourt. Back in his routine. Then, midway through the first half, back to himself, albeit in a small dose, Rob dunked on and stuffed Andre Drummond to highlight a 16-minute effort. He responded well to his minutes, hopeful to build on a roughly 20-minute limit, and provided an emotional boost for the Celtics, who took a commanding 3-0 lead over the Nets with a 109-103 win.

Sam Hauser had the most energetic reaction to hearing Williams III would return to Game 3, getting in the center’s face and clapping his hands. Jayson Tatum made his own pitch for his fandom post-game, declaring himself Williams’ biggest fan. Tatum fittingly tossed Williams III his first lob in his return to action, which he flushed down. Williams III was officially back.

“I was extremely excited,” Tatum told CLNS. “Rob and Bradley Beal are probably my two favorite players. Getting Rob back is huge for our team. Even in limited minutes, how much of an impact he made on the game. Even if it doesn’t show up, just his presence, being a lob threat, rim protector, great passer. Rob was big for us off the bench. If we’re going to do anything special this postseason, we definitely need him.”

Williams didn’t impact the game with the ball in his hands right away. He held down the post while Tatum hit two mid-range shots with Williams III kept the defense honest in the paint. The Celtics overcame an early deficit, tightening up their defense with the starting lineup they’d utilized since Williams III’s injury.

Marcus Smart and Brown led a spirited timeout discussion in timeout, grabbing a pair of stops after to free Tatum for a leak out three, then a pair of free throws. Smart swiped away a Seth Curry entry pass to Durant, tossing the ball ahead to Tatum for three more, as the Celtics shot ahead 30-25 into the second quarter and never looked back.

The Nets didn’t debut Ben Simmons, continuing to target Game 4 on Monday. They did rediscover Bruce Brown in the opening minutes, getting himself going with a steal on Tatum into a breakout score before scoring a put-back with the first of nine Nets offensive rebounds in the first half. Brown found Kyrie Irving cutting baseline and hit Durant for three from the short roll, scoring 10 points himself in the first quarter as Brooklyn took a 12-5 lead. Irving mentioned a concerted effort by Durant to get others involved, which spiraled into only Durant’s fifth game this season where he attempted 11 shots or fewer.

Payton Pritchard hit a pair of shots inside and a step-back three after Tatum beat Durant to his mid-range spot, drawing an offensive foul. Williams III entered and Pritchard drilled another triple to give the Celtics a double-digit lead early in the second quarter, but Bruce Brown and Nic Claxton scrapped away against Boston’s interior. Brown scored 10 points in the first, before stripping Tatum and hitting a pair of cutting layups. Claxton helped produce 10 straight Nets points inside with cuts and offensive rebounds, then Patty Mills hit a three following Durant’s steal to pull Brooklyn back within one point before halftime.

“You got to focus on these guys and we’re taking risks and making other guys beat us,” Udoka said. “Credit Bruce, he’s making some shots, but we’ve got to live with something. That’s what we’ll live with over Durant and Irving going off.”

The Celtics righted themselves after halftime, turning a pair of Nets turnovers, two of 18 in the game, into a Theisthree and Tatum run-out bucket. Jaylen Brown and Tatum sustained Boston’s lead through the middle of the third with 19 points, four steals and seven free throw attempts. Brooklyn’s reliance on Claxton and Brown faded into a pair of missed layups from the former, and a dropped pass from Irving and eventual three-point miss off glass to end the same possession from the latter.

As the Nets fell behind by double-digits, Blake Griffin checked in for the first time all series and only his second appearance since March. Barclays Center roared into its loudest ovation all night, Griffin responding by forcing and winning a jump ball against Tatum, and drilling back-to-back three point attempts.

Jaylen Brown attacked Bruce Brown’s kick-out pass to Griffin after Bruce got jammed in front of the basket by Williams III rotating inside. Jaylen Brown ran his steal back for a slam, and took another forced turnover by Williams III switching onto Durant back for an up-and-under through Durant on the other end.

Smart and Grant Williams both mentioned the safety net effect Williams III provides at shootaround. As aggressive and versatile as the Celtics played the Nets to begin the series, Williams III brings more size, perimeter poise and athleticism than Theis. Having that behind the perimeter defenders allowed more aggressiveness, and played into Saturday’s defensive disruptiveness. The win also gave Williams III a starting point to build toward more minutes.

“Rob looked pretty damn good to me,” Jaylen Brown told CLNS. Came back, instant impact, what he’s been doing all year, protecting the rim, had some big blocks. Some lobs. It was great to see him catch a lob. That was uplifting for everybody. Just his presence, being there on the floor, knowing he’s behind us makes us feel good as we continue to go. We’re looking for him to continue to get his reps and come back strong.”

Jaylen lined up Griffin in the half court into the final frame, burying a step-back three, blowing by Griffin for two inside. He exploded past Griffin again and found Tatum for three with Durant slow to rotate. Williams III quietly keyed the run with his rotations. When Griffin appeared, Udoka knew the Nets had entered scoring contest mode. Desperation.

“(Rob) had no problems at all. His confidence is up,” Udoka told CLNS. “That’s what we wanted to see. Lower-minute game, although we had him slotted for more, he got to 15. He felt comfortable, looked good, felt good and impacted the game in a positive way.”

The Celtics leaned further into their defense, setting off a flurry of exclamation point finishes in transition midway through the fourth quarter. Marcus Smart dove into the paint to set up a decisive passing sequence through Tatum to generate an Al Horford three and a 13-point lead moments later when Tatum drove and finished in the lane.

Irving picked up his fifth foul early in the frame and Durant took one shot in the final 12 minutes. They combined for 32 points, fewer than Tatum’s 39. Tatum added six assists and six steals on 13-for-29 shooting, a first in playoff history as Boston ramped up its defense even more in anticipation of what they can potentially accomplish with one more win to clinch the series and Williams III’s continued integration.

“Just seeing how hard he’s been working,” Tatum said. “Two-a-days, weight room, treatment. I’ve seen the maturity in this last month, because he knows how much he means to this team and how much we need him … it just felt good to just throw it in there and he can go grab (the lob).”