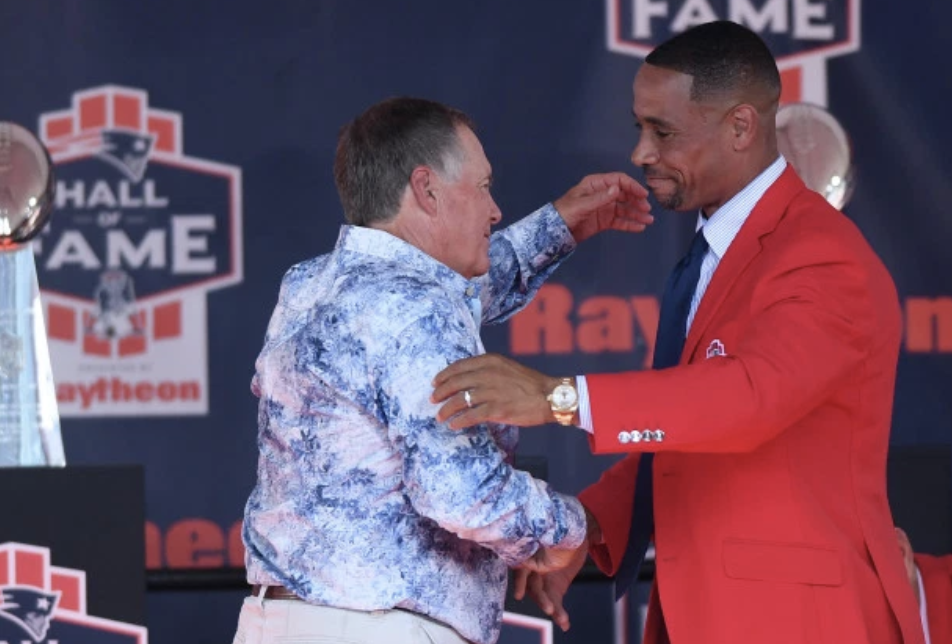 FOXBOROUGH – Rodney Harrison has always known how to get his message across.

He proved that again Monday when he delivered a speech that included many trips down memory lane. One of those memories was his laying out of Troy Brown during one of his first training camp practices before the 2003 season, his first season with the Patriots.

But before delivering that speech in which he accepted his nomination into the Patriots Hall of Fame, he had a more directed and powerful message aimed at the current members of the franchise that is on a mission for a record-setting seventh Lombardi trophy this season.

He and Willie McGinest reminded every single player in the room competing for that privilege that while they have the best coaching staff in the game that will prepare them for each week of the season, the real responsibility lies with them to meet the coaches halfway.

“That was one of the points I made,” Harrison told me, with sweat still pouring from his brow from the 90-degree heat. “If you’re a young player and you’re trying to make this team, it’s your job to seek out help. There’s no reason you should come out and mess up a formation or alignment. If you’re the ‘Z’ receiver, you need to know exactly where you need to be. If you don’t know, you can’t play fast. You can’t play if you don’t have knowledge.

LEADERSHIP IS A 2-WAY STREET: @trags asked Rodney Harrison why it's not just the coaches' job to prepare for games. #Patriots pic.twitter.com/lQDFoRmWKu

“You have everything at your disposal right here. You’ve got coaches, assistants, people who break down film. Get with a veteran player, ask questions, follow players. I followed Junior Seau everywhere, hot tub, cold tub. Only place I didn’t follow him was the toilet. I followed him everywhere because I wanted to learn. If you’re hungry and coaches see that, then guess what? They’re going to say this guy is really eager. He wants to learn. Then it’s going to play to your benefit. But you’ve got to use your resources and your resources are your veteran players, your coaching staff.

“You have everything at your disposal. There’s no reason a player shouldn’t have confidence going on the field.”

Did he ever take aside a player and tell him to wake up and pay attention to the opportunity with the Patriots?

“Absolutely. All the time,” he added. “If I saw them over there goofing off I’d say, ‘Let’s go watch some tape. You have 15 minutes to sit here and goof off, let’s go watch 15 minutes of tape to make you better. Yeah, I was part of that. I was part of grabbing guys and saying, ‘In order to take your game to the next level, you have to study. We’re all great athletes but you can’t rely strictly on athleticism.’”

Back to that first camp in 2003 and his decking of Troy Brown, Harrison, whether he wants to admit it or not, immediately changed the culture. Yes, the Patriots had Willie McGinest, Tedy Bruschi, Ty Law, Ted Johnson and Lawyer Milloy (until he was released before the opener).

But Harrison brought a nasty to the Patriots that Belichick couldn’t get enough of.

At one of the first full-contact scrimmages as a Patriot, Harrison drilled Troy Brown, then poked him in the eye. Brown caught the ball and in a rare fit of pique, threw it at Harrison.

A few days later, Harrison clobbered Brown again. In another practice, he clotheslined Kevin Faulk Matt Light jawed at Harrison and just as the two grabbed each other by the helmet, Milloy jumped in followed by a flying Bruschi onto the pile.

“It gets a little frustrating in training camp,” Harrison said at the time. “It’s hot. You’re tired. Everyone basically just wants to get it over with. When I’m on the field, I’m already in a foul mood.”

Harrison had a slightly different perspective Monday, almost 16 years to the day later.

“It wasn’t about me,” Harrison said. “I just wanted to be part of something. I can’t change who I am, as far as my aggressive style, my leadership and things like that. I couldn’t change that and I wasn’t willing to compromise that. If it meant hitting Troy and pissing him off or upsetting Kevin Faulk, so what? I just got released (after 2002 season). I’m here. They gave me a decent contract. I’m here to play. I’m here to win football games. I’m here to let Coach (Belichick) and everyone else know I wasn’t going anywhere.

“I played hard. I played tough and I tried to play every play like it was my last play. When I retired, I was comfortable with that.”

Listening to Harrison Monday, you get a better appreciation of what it was that Belichick saw day-in and day-out with the only player along with Ray Lewis to every record 30 sacks and 30 interceptions in a career. Lewis is already in the Pro Football Hall of Fame. Harrison belongs there in Canton with him.

“There will be other Patriots in the NFL Hall of Fame. This one, Rodney Harrison, deserves to be there,” Belichick pitched Monday.

Harrison transformed the Patriots defense into a unit to be feared and respected around the NFL, and by his own teammates. If the current Patriots were paying attention Sunday, that’s a message and image that remains loud and clear today.