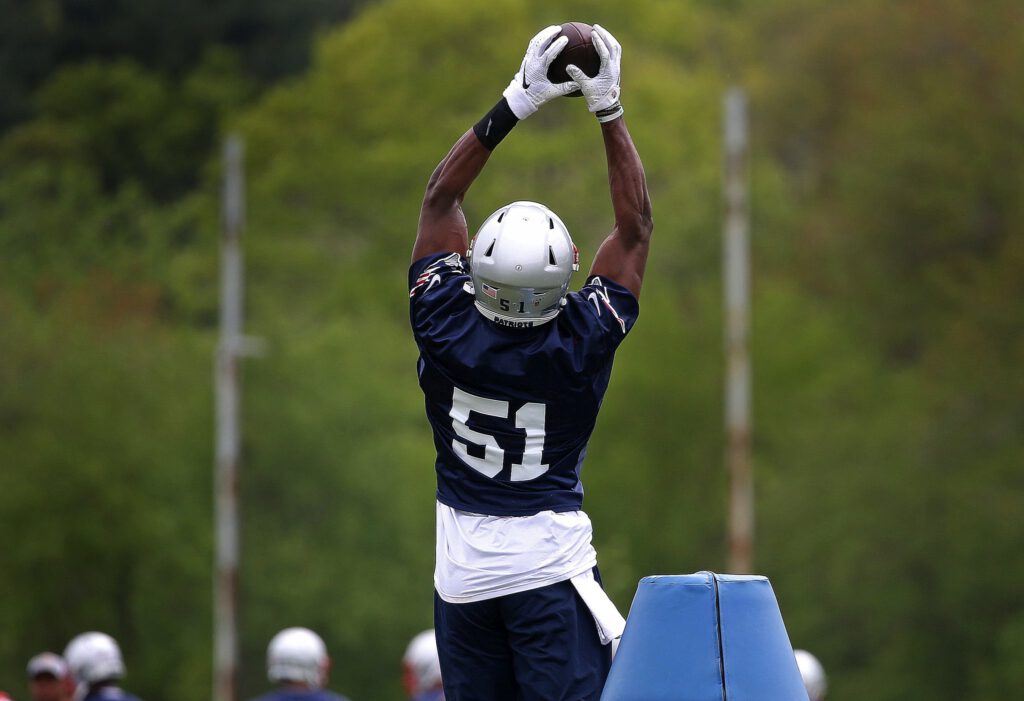 When the Patriots drafted six-foot-four cornerback Joejuan Williams in the second round we all harkened back to this quote from Bill Belichick’s pre-draft press conference:

Two weeks later, the Patriots selected one of those big receivers in N’Keal Harry in the first round and then followed that up by taking Williams 13 picks later.

The Patriots built their wide receiver corps and secondary like a basketball team: they have every position covered from point guard to center on both sides of the ball.

Between six-foot-three wide receivers like Harry and pass-catching tight ends, there’s a need for big corners like Williams. And statistics show that corners give those prolific tight ends trouble.

Look no further than the recently retired Rob Gronkowski whose passer rating when targeted against linebackers or safeties in his last three seasons hovered around 130.0.

Against cornerbacks, Brady’s efficiency throwing to his future Hall of Fame tight end dropped into the 70s, and Gronk was one of the better tight ends at getting open against corners.

Based on Belichick’s words, we can easily understand that the team sees Williams as a big-bodied corner that can match up against the bigger receivers all over the league.

Now the only question that remains is how does that philosophy look when implemented on the football field?

To get a gauge for Williams’ future usage, let’s turn back the clock to the 2014 Super Bowl champions.

Along with All-Pro corner Darrelle Revis, the Patriots had the similarly built Brandon Browner patrolling the secondary.

Browner was slightly bigger than Williams, but their body types are virtually the same and so were their testing numbers at the NFL combine.

In his lone season with the Patriots, Browner was mostly an outside corner lining up on the boundary on 73 percent of his snaps. But the other 27 percent was made up of snaps in the slot and box.

Furthermore, here’s a snapshot courtesy of Pro Football Focus of the receivers that Browner covered that season, mostly a mix of bigger wide receivers and tight ends:

At Vanderbilt, Williams played outside cornerback on 88 percent of his defensive snaps, but the theory here is that his deployment will look a lot like Browner’s in 2014 with more snaps inside.

The numbers on the page tell most of the story, but let’s look at Browner’s film from 2014 to illustrate what it could look like for the Pats rookie on the field:

During my review, there were a few games that stood out as trendsetters for both Browner and Williams: the 2014 AFC Championship Game and a Week 12 matchup against the Detroit Lions.

In the win over the Lions, Browner covered All-Pro receiver Calvin Johnson on 24 of his 49 routes.

As you’d expect against a talent like Johnson, Browner had help holding Megatron to a modest four catches for 58 yards.

One of the calls that many Patriots fans probably remember for that season is “one double,” which is a vintage Belichick strategy of doubling the oppositions top receiver.

Here’s a great example of “one double” with the Patriots implementing their “cone” coverage against Johnson, leaving Revis one-on-one with tight end Eric Ebron.

Browner starts the play across from Megatron to the right of the quarterback and then motions across. One rule in the Pats “cone” coverage is that it’s locked on wherever that receiver goes, which is illustrated here by safety Devin McCourty following Browner and Johnson as well. From there, Browner and McCourty cover Johnson inside-out with Browner in a trail technique responsible for underneath routes and out-breaking patterns while McCourty takes anything deep or to the inside. The two take Johnson out of the play, and the pass rush gets Stafford off his spot, and he eventually tests Revis who has good coverage on Ebron.

The Patriots had Browner on Johnson at the line of scrimmage with safety help multiple times in that game, which made things difficult for the Lions offense holding them to nine points on three field goals.

Later that season, the Patriots’ second-half adjustment in the Super Bowl to put Browner on breakout star Chris Matthews was a significant factor in their defensive turnaround.

In the first three quarters, the six-foot-five Matthews had 109 receiving yards mostly against the much shorter Kyle Arrington (5-10).

Browner took Matthews for most of the second half after his second big catch, and the unknown receiver only caught one pass for nine yards the rest of the way.

Browner followed Matthews into the slot for Matthews’ only fourth-quarter target, and the Pats corner broke up a pass in the end zone just a few plays before Malcolm Butler’s infamous interception.

Speaking of that interception, Browner’s jam on Seahawks wideout Jermaine Kearse cleared a path for Butler to make a play on the ball, an underrated aspect of that play.

Along with covering wide receivers, the Patriots also moved Browner inside for matchups against tight ends.

As noted earlier, the 2014 AFC Championship Game was another notable performance for Browner as he covered either Coby Fleener or Dwayne Allen for most of that contest.

Like Williams, Browner had rare movement skills for his size, making him a tight end stopper.

On this play, Browner was in man coverage on Fleener in the slot. Fleener tries an out-and-up move against Browner, but the six-foot-four corner effortlessly transitions his weight to match Fleener’s route step for step. The running back ends up dropping an open dump off, but Browner does a fantastic job on the Colts tight end.

Along with his movement skills, Browner had the size at 221 pounds to play in the box.

Here, Browner is essentially an outside linebacker playing at the end of the line of scrimmage. His jam is so effective that Allen doesn’t even get into his route, forcing Luck to throw the ball away.

The Patriots would also play Browner at off-ball linebacker from time to time. He motions across with Allen here, and then fills the hole against the run to help make the tackle.

With Browner, the Patriots had an answer for all the big receivers that haunt defenses in the NFL, and Williams has all the tools to take on a similar role.

Like Browner, there are concerns about Williams’ long speed, confirmed by his slow 40 time (4.64 seconds, seventh percentile), and his ability to stay with faster receivers on vertical routes.

However, the current Patriots have their own Darrelle Revis in All-Pro corner Stephon Gilmore who can take receivers on an island without safety help if they need to protect Williams.

Plus, the rookies’ speed shouldn’t be a problem against slower tight ends.

With Williams, the Patriots’ secondary has a very similar look to the 2014 defense that helped Tom Brady and Bill Belichick win their fourth Super Bowl title.