The rookie punt returner scored his first career touchdown when his team needed it the most. 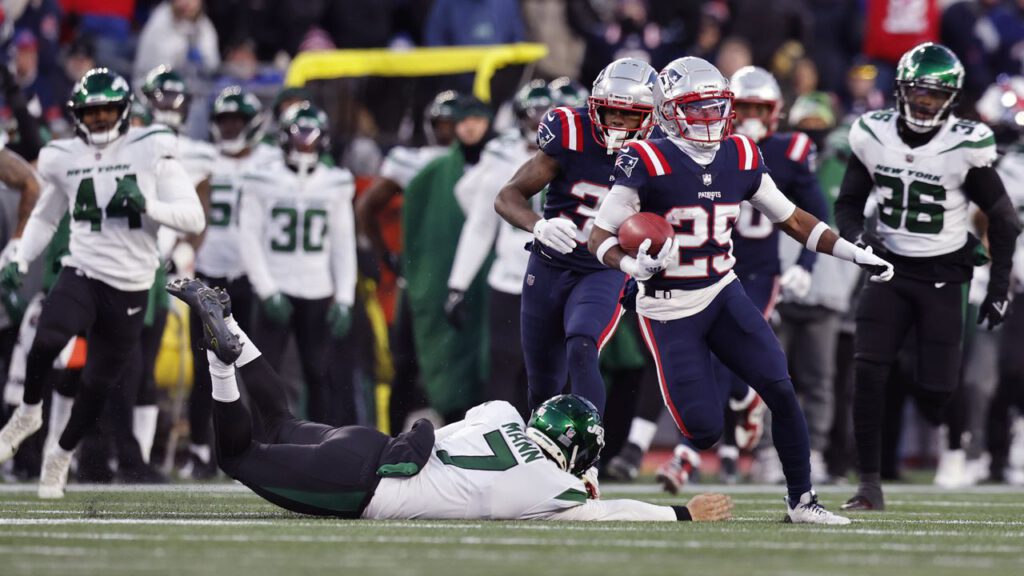 FOXBORO, Mass. – When you think of the craziest Patriots victories of all time, “28-3”,  Malcolm Butler’s interception, and, of course, Adam Vinatieri in the Super Bowl all come to mind.

It’s not an exaggeration to now put Marcus Jones’ walk-off punt return touchdown against the Jets in that mix.

Tied at 3 with just 26 seconds left – New England strangely called a timeout, despite not being able to get anything going on offense, instead of letting the game go to overtime – and the rest was history.

Rookie punt returner Marcus Jones took Jets Braden Mann’s punt to the house and clinched a 10-3 victory for the Patriots. Here’s a look at the play:

And here’s an even better look at the play:

Jones was asked after the game what went through his head before catching the punt, and how he’s able to keep his emotions in check with the moment still fresh in his head:

“My first thing was ball security, making sure I track the ball and everything because the wind was going crazy out there. That was the main thing and just staying within the scheme. Without my teammates on that play, that would have been a hard play to make.

It’s one of those situations to where I’m happy, definitely for the divisional win. That’s the main thing and now I’m on to the next week. I’m one of those people.”

Jones also said that this was the first game both of his parents were able to make it to his game: “This is their first time coming – both, together, coming to this game. Just excited for them to see the atmosphere of this place and just having a good time watching the game.” Quite a way for the Joneses to get introduced to the scene in Foxboro.

I asked quarterback Mac Jones his thoughts on a fellow Jones sealing the deal for the Patriots today:

“Yeah, I think that was great. I think that shows why football is one of the greatest – it is the greatest team sport. It takes 60 minutes to win games in the NFL. You see that every week. Really proud of our team and offense, defense, special teams. I thought we came together, and at the end of the day in tough conditions like that you’ve just got to find a way to win. We did that, and that’s something to be proud of. We’re excited about this one, and like I said, we’ve got a quick turnaround, so going to be a lot of improvement to be made, and we know what we want to improve on, so we’ve just got to do it.”

Like Jones said, the Patriots have a quick turnaround before taking on the Vikings on Thanksgiving night in Minnesota. We’ll have you covered here on CLNSMedia.com for all of it!