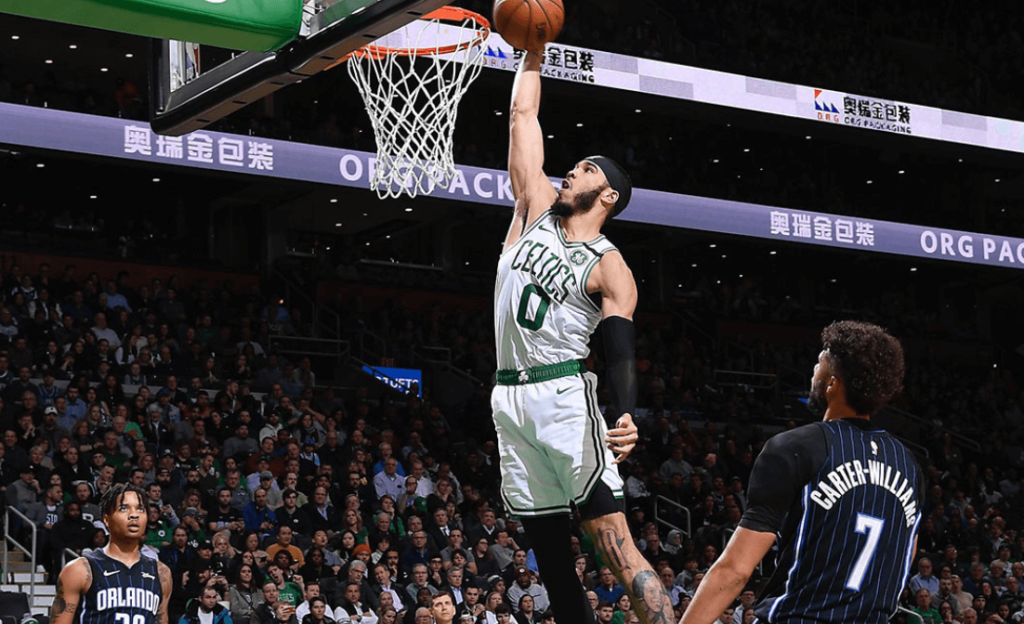 BOSTON – When Danny Ainge decided to keep two of his three picks in the first round last June, most wondered if and when Romeo Langford and Grant Williams could contribute to the 2019-20 Celtics.

On Wednesday, during a 116-100 win over the Orlando Magic we got a good peek into what exactly Danny Ainge and Brad Stevens were thinking.

Both Ainge and Stevens knew that Langford and Williams would take some time and development and that they weren’t projected to be impact rookies like Jaylen Brown and Jayson Tatum, both taken third overall in their respective drafts.

With Williams and Langford, the integration has been different, and with good caused. This Celtics team has plenty of scorers in Walker, Tatum, Brown, Smart and Hayward. Langford, who played in just 14 games prior to Wednesday, was averaging just under 2.3 points in 8.4 minutes a game. Williams has arguably been the most impactful rookie this season, averaging 3.6 points in 16 minutes a game. He’s already played in 15 minutes. He’s played in 47 games already.

Langford, selected 14th, and Williams, taken 23rd, have nevertheless continue to grow in the Celtics system.

With Kemba Walker, Marcus Smart, Daniel Theis and Rob Williams all out Wednesday due to various injuries, Wednesday was as good a time as any to see how much they’ve grown.

Langford made his first career start in his 15th NBA game, making 3-of-4 shots from the floor and finishing with six points and plus-8 rating in 28 minutes. Williams played 22 minutes off the bench, scoring 13 points.

“I know he probably was a little nervous, but he played well out there,” Tatum said of Langford’s first NBA start. “Coming in, he played hard he gave us some energy and got some stops on defense. That is all we can ask, and especially because it is his first start. He just followed the game plan, and playing with effort is all we can ask for. He did a great job tonight.”

What was most significant were the minutes both played down the stretch as the Celtics were protecting a five point lead with five minutes left in the fourth. Yes, they had the likes of Jayson Tatum, Jaylen Brown and Gordon Hayward surrounding them, a nice cushion to fall back on but still, those were crunch-time minutes.

“Those guys both played their role well,” Stevens told me. “We went up to Romeo this morning and said it’s highly likely that Marcus (Smart) and Kemba (Walker) aren’t playing, and if they don’t, you’ll start on (Evan) Fournier, and that’s really hard. But that’s your only task. So, focus on it, do as well as you can, and then space the floor, and just play off the other guys. Let those three guys make the game easier for you. And he did a good job of that tonight. I thought Grant – Grant’s been really good throughout this whole stretch at doing that; he’s figuring out where his spots are, you know, playing off the others.”

Spacing on offense was particularly important Wednesday in a game without two key distributors in Walker and Smart.

Putting Langford on Fournier was critical Wednesday because it allowed Jaylen Brown and Gordon Hayward to find their shots on the other end of the court. What Stevens made abundantly clear to Langford and Williams was that youth was not going to be any excuse for not defending well or understanding a particular role.

“Patience isn’t one of my best qualities,” Stevens said. “So, I would say no. I don’t have any patience with anybody making mistakes, and I think our players are good at accepting that, and making sure they don’t do it again, but these guys have been around enough. They may see an action for the first time, but by now, 50 games in, you’ve seen most everything. And so you know what your role is, know what your job is, just do it.”

The game went about as you would expect on Boston’s home court. The Celtics would build leads of eight points early in the first half and late in the third quarter. Each time, the Magic would respond, either due to Celtics breakdowns on defense or singular shot-making from Aaron Gordon and Evan Fournier.

Fournier did wind up with a Magic-high 26 points on 8-of-15 shooting but afterward the Celtics were quick to praise Langford for making several shots difficult on him.

Sometimes adversity can provide a glimpse into the future. That’s what a game like Wednesday can really do for you.

Then again when you have Jayson Tatum lighting it up for 33 and Gordon Hayward chipping in with 23 points, seven rebounds and seven assists, your future should look pretty bright, even if you’re shorthanded.