Run To Daylight: Why Bengals Run Wide and Why The Draw Is So Dormant In Today’s NFL

With Paul Brown, the Bengals once perfected the draw to counter players like T.J. Watt. Not so much anymore. 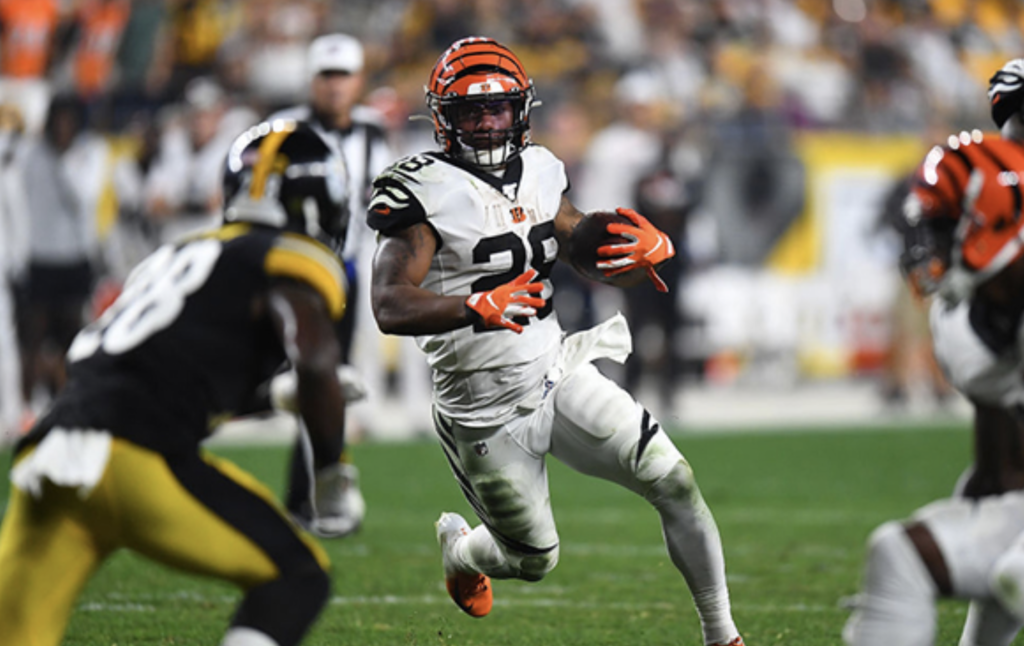 CINCINNATI — When Otto Graham and Marion Motley couldn’t get on the same page on a handoff back in Paul Brown’s All-America Football Conference days with the original Cleveland Browns, one of the great weapons to counter heavy defensive rushes and blitzes was born.

On the botched play, Graham, the quarterback, was forced to improvise a hand-off to Motley, the fullback, with a big delay involved. A surprised Motley, who had been expecting to block on the play, instead ran for a big gain. As he always did, Paul Brown noted the success of the improvised play and began to work it in as a regular play, creating four different versions.

The reverse play-action has the quarterback faking a downfield throw before sticking it in the breadbasket of the running back, who remains behind with the quarterback and then takes off. Ken Anderson perfected this with running backs like Stan Fritts, Boobie Clark, Archie Griffin and Pete Johnson in the 70s.

With yet another fierce pass rushing attack coming to Paul Brown Stadium this Sunday in the much-anticipated rematch with the Steelers, it’s worth looking at whether Joe Burrow would be asked to run a draw or two to counter the upfield pursuit of T.J. Watt and Alex Highsmith. Watt was someone the Bengals didn’t have to account for in Week 3. They won’t be so lucky this week.

“Any team wants to establish the run,” Burrow noted Wednesday. “With all the pass rushers, if you just drop back and pass, you’ll get sacked and get behind the chains. Establishing the run, that’s the basis of every offense in the league.”

The draw has traditionally been used in third-and-long or on second down when the offense is looking to pick up chunk yardage to put themselves in a more manageable position on third down.

The running back will most often run straight downfield through the hole in the “A-gap” (the space between the center and the offensive guard), although there are more complicated variations. The most common variation of this play is the “quarterback draw,” where the quarterback keeps it and runs the ball, instead of handing it off, meaning the running back is free to help block.

However, there’s a catch in today’s game, limiting the number of potential draw calls by offensive coordinators and play-callers like Bengals head coach Zac Taylor.

“I think the interiors to a great job,” Taylor told me of the ability of defensive tackles like Cameron Heyward reading the plays and protecting their gaps. “And these pass rushers, the repertoire of moves they have right now, it’s not just spring up the field and beat the tackle around the edge. I just think back to watching Clowney and studying Clowney every single play and some of the moves he was going to put on these tackles. Same thing last week with Crosby, and no different with T.J. Watt.

“They do a good job of understanding, ‘OK, what is the offense gonna do to combat what I’m doing?’ They’re chipping, they’re protecting the edges, they’re running draws, they’re trying to run some inside screens. And they do a pretty good job to combat that. That doesn’t mean it doesn’t work. When there’s good opportunities to do that stuff. But I just think that they do a pretty nice job defending some of that stuff, and Pittsburgh is so stout inside also that you still have to win in there on some of those draw plays.”

The Bengals have a wide variety of backs led, of course, by Joe Mixon, a back that Ja’Marr Chase called a “freakish” specimen on Wednesday. They also have more of a downhill back in Samaje Perine and a prototypical third-down back in Chris Evans.

But so far this season, the Bengals have run away from the center of the line of scrimmage, not to it in offensive line coach Frank Pollack’s scheme.

“Probably because they’re so disciplined in their rush lanes,” offensive coordinator Brian Callahan said. “They’re disciplined with how they read. A lot of times, it’s not the ends that are the problem. It’s the interior. When those interior guys are two-gapping and putting their hands on you, they’re just trying to read the ball. They don’t really rush all the time. The ends rush a lot. Sometimes you see that style of defense.”

Another reason? The Bengals have some of the best blocking receivers in football, in Stanley Morgan Jr., Ja’Marr Chase and Tee Higgins. All three of them have proven invaluable in offering Mixon lanes to run through.

“Stanley is everybody’s favorite player on the team,” Burrow noted. “He doesn’t get any love from (media) and from across the country because nobody sees what he does. But he runs down on special teams and makes a play every single game. And when we ask him to come in (on offense), he blocks his tail off for other guys to make plays so Stanley is one of the core players on this team that I don’t know what kind of team we are without Stanley.

“That’s something that not a lot of receivers will do, and that’s what I love about our guys. They’re excited about catching 50, 60-yard touchdowns and they get just as fired up about pinning a defensive end to let Joe run outside so that’s the kind of guys they are.”

“Teams that want to play penetration, up the field pass rush, pass rush to disrupt the run, which is how some teams play,” Callahan added. “There is a place for those. But a lot of times, you get in second-and-10s nowadays and second-and-8s, the pass is so skewed in the NFL now that there’s so many people that throw the ball in those second-and-longs, so now you start getting third-down rush packages, third-down coverages, sometimes third-down pressures on second and 7-plus. And that’s generally where those draws come in.”

The Bengals have also used Mixon to run backside counters on their zone blocks to free him for big runs, like a 27-yarder on first-and-10 in the second quarter against the Steelers in Week 3. Mixon finished with an efficient 90 yards on 18 carries, good for a 5.0 yards per carry average. Mixon’s runs have been used in the first half to keep defenses honest while protecting against the pass while he’s done a terrific job of finishing off teams in the second half, like he did Sunday against the Raiders, when he had over 100 of his 131 yards in the third and fourth quarters.

“So, you try to run a draw and you’ve got a third-down pressure package coming at you because you have a heavy tendency in pass or now all of a sudden, they’re going to widen the front and they’re game, stunt and twist and those stunts and twists can kill draws,” Callahan said. “So, I think the days of just the straight four-man rush up the field where draws look really good has gotten harder.”

And with teams playing more zone to limit the explosive plays from Ja’Marr Chase and Tee Higgins and contain Tyler Boyd underneath, there exists much more of a chance to run. How will the Steelers approach Sunday? That’s a great question.

“Defenses have gotten smarter to that stuff,” Callahan said. “Not to say that you can’t hit a draw and teams do hit draws and traps and things like that against these up-the-field rush teams. But I just think it’s been so pass-heavy in the league that defenses have adjusted, to some degree, to some of those draw plays that you used to see popping for a bunch of yards.”