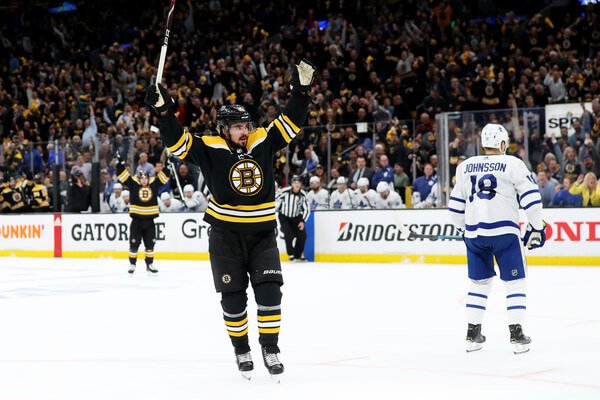 The news anchors can finally get some sleep, the helicopters tracking Marcus Johansson’s every move can be grounded, and the cameras can be turned off. The Johansson watch is over.

The Buffalo Sabres signed the Ex-Bruins forward to a two-year deal worth $9 million. The average annual value comes out to be about $4.5 million, which is a hair less than he was making on his previous contract.

The Bruins weren’t expected to bring Johansson back, given their $10 million in cap space and slew of RFAs they must sign. When Don Sweeney spoke to the media on the first day of free agency, he said that the B’s hadn’t offered Johansson anything.

It’s no secret that the Bruins lost an important piece. Johansson didn’t sign for anything expensive and by all accounts, he wanted to stay in Boston. The 28-year-old winger developed great chemistry with Charlie Coyle and had he re-signed, he probably would’ve been promoted to David Krejci’s right side on the second line.

Including playoffs, the Bruins were 9-0-1 when Johansson recorded a point last year. https://t.co/aGnLiquesQ

Johansson’s four goals and 11 points in 22 playoff games had him tied for sixth on the Bruins. His offensive output kept the B’s afloat during the second round against the Columbus Blue Jackets and in the Stanley Cup against the St. Louis Blues.

It’s hard not to blame Don Sweeney in this situation. Even though the Bruins must sign RFAs Charlie McAvoy, Brandon Carlo and Danton Heinen, teams are allowed to go over the cap by 10% in the offseason.

The David Backes contract doesn’t help Sweeney and the Bruins either. His yearly cap hit of $6 million is one that’ll be on the books for the next two seasons. Even worse for the Bruins is that buying him out won’t do anything significant.

It was a crazy first day of #NHLFreeAgency. @emarinofsky welcomes on @BShareCohen to react to it all!

In Johansson, the Bruins lost a legitimate offensive threat through free agency and they have nobody to blame but themselves.

And of course he goes to the Atlantic Division rival Sabres.