Sam Jones, 88, won 10 championships, including eight straight, as "The Shooter" alongside Bill Russell on the original Celtics dynasty.

Sam Jones, 88, a North Carolina native who played for the Celtics for his entire 12-year career, passed away on Thursday from natural causes. His retired No. 24 hangs from the rafters along with the rows of banners Boston’s triumvirate of original champions delivered before two consecutive eras that followed built on it. The team will honor him with a moment of silence before Friday’s game against the Suns.

Only Bill Russell raised more Celtics championship banners to the rafters than Sam Jones. Only the late K.C. Jones joined those two on their run of eight consecutive titles from 1959-1966 that established Boston as the preeminent franchise in the early days of the NBA. Now, only Russell remains from that original big three.

“Another one of my dear friends lost,” Celtics legend and broadcaster Cedric Maxwell tweeted Friday. “Well, the banks are open in heaven this #NYE. RIP to fellow NC native, a legendary player, a 10x champion w our @Celtics, and a wonderful person.”

Another one of my dear friends lost. Well, the banks are open in heaven this #NYE.

RIP to fellow NC native, a legendary player, a 10x champion w our @Celtics, and a wonderful person.

Jones, standing 6’4″, 200 pounds at shooting guard scored 1,745 points between two stints that still rank second in North Carolina Central University. Even in 1957, the University of North Carolina commanded the attention of Red Auerbach when he journeyed south to scout. Then-Wake Forest head coach Bones McKinney told Auerbach about the best player in the state, who wasn’t a Tar Heel. As Auerbach often did, he never attended one of Jones’ games, but selected him No. 8 overall.

“Our style of play at that time started the use of smaller, fast forwards,” Auerbach said in Pro Sports Weekly. “It was up tempo, and because it put a smaller team on the floor we had to go to the press more often. See, Sam understood his role in this perfectly. He would race the length of the court on the wing, and on defense he knew how to pressure his man. Sam was a smart basketball player.”

Jones emerged as a double-figure scorer by his second year in the league and grew more efficient as a high-volume jump shooter. Joining Russell, who the Celtics drafted one year earlier, Jones, Bill Sharman, Bob Cousy, Tom Heinsohn and Frank Ramsey lost the NBA Finals, 4-2, to the Saint Louis Hawks with Jones only averaging just over 10 minutes per game. It’d be the last time Jones would lose there.

With Russell as the reigning MVP and K.C. in the mix out of San Francisco, the Celtics snuck by the Syracuse Nationals and topped the Minneapolis Lakers, the team that had originally claimed Jones in the draft before he served a two-year stint with the U.S. Army and returned to school to finish his degree. Sharman’s career winded down, and Jones’ began flourishing. It’d go down as one of the 25, 50 and most recently top-75 careers ever when the NBA unveiled its anniversary lists in the years to come.

“In the years that I played with the Celtics,” Russell said. “In terms of total basketball skills, Sam Jones was the most skillful player that I ever played with. At one point, we won a total of eight consecutive NBA championships, and six times during that run we asked Sam to take the shot that meant the season. If he didn’t hit the shot we were finished – we were going home empty-handed. He never missed.”

Jones scored 15,411 points (17.1 PPG), grabbed 4,305 rebounds (4.9 RPG) and served 2,209 assists (2.5 APG), eventually leading those fast-paced, high-powered Celtics teams to over 110 points per game. He reached his peak in 1965, appearing in his third of five career all star appearances, averaging 25.9 points per game on over 22 shots with a 45.2% FG. Jones’ 51 points next season against the Pistons still ranks seventh in Celtics history, even with Isaiah Thomas and Jayson Tatum joining that list within the past decade.

Stylistically, Jones utilized the bank shot, helped push the ball up the floor and became the scoring force in tandem with Russell’s anchoring defense on the first Celtics dynasty. His shooting provided an early form of floor spacing, even earning him the nickname “The Shooter,” while his scoring still stacks up all-time in NBA Playoff history (2,909 points, 30th).

Russell, who became player/coach at the tail end of Jones’ peak from 1966-69, called one of the guard’s numerous game-winners, which claimed Game 4 in a seven-game victory that landed Russell his 11th ring and Jones his 10th. A great shooter, Jones also gained a reputation in the clutch that stacked him up with the great guards of his time, Oscar Robertson, Jerry West, Hal Greer. Jones won the 1962 Finals in the closing seconds with a jump shot. His shot also topped Philadelphia in Game 7 of the 1968 east finals, before the Celtics beat the Lakers in six.

“I knew that last shot was good from the moment it left my hand,” Jones said of his look in ’69. “There never was any doubt because I had time to release the shot properly, and I trusted my technique completely. That took the pressure off. The ball rolled right over the cylinder. We won that game, and then we went on to win the championship.” 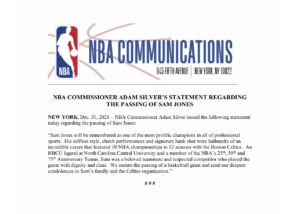 Jones had announced his retirement, with Russell in admiration keeping his own a secret and letting him have the early version of the retirement tour. The pair set the bar for the years to come, Russell perhaps knowing Jones would go down as the unsung of the pair, but a no less important basketball figure from that era. One also marked by Russell deciding to pull the team out of an exhibition game in Lexington, Kentucky when Satch Sanders and Jones got denied service at a restaurant for being Black. They endured peak American racism, even at the top of their profession. Even someone who served his country, like Jones did.

Jones had aspirations of teaching, entering medicine was a long shot, it cost too much money, and when Auerbach drafted him, the financial considerations of what profession he’d choose still weighed evenly on the legend who wasn’t completely sure he was ready to leap to the pros. The Celtics no less. 12 years later, Auerbach owed his coaching success to him taking that chance.

“I would like to thank Sam Jones,” Auerbach said at his retirement ceremony. “For making me a helluva coach.”