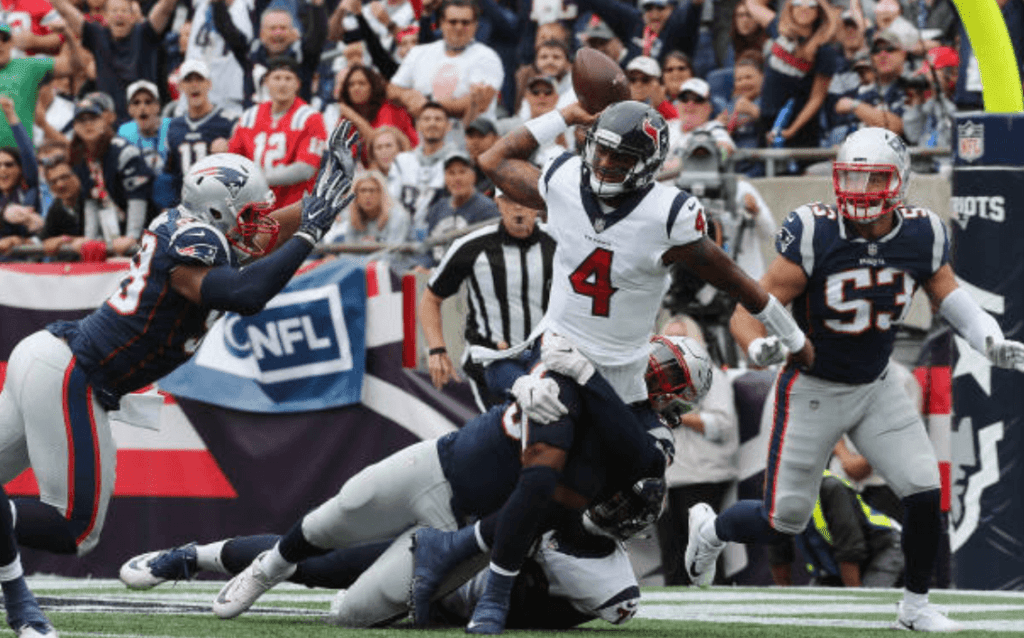 FOXBORO — With questions surrounding them all offseason, Tom Brady and Rob Gronkowski made sure these Patriots came ready for the 2018 season.

Brady finished 26-of-39 for 277 yards and three touchdowns while Gronkowski earned his 27th career 100-yard receiving game with seven catches and 123 yards as the Patriots hung on for a 27-20 win over the Texans Sunday at Gillette. Brady improved to 13-3 as a starter on opening day, matching Peyton Manning for the most opening day wins by an NFL quarterback. The Patriots are now 10-1 all-time against the Texans, including 8-1 in the regular season and a perfect 7-0 at Gillette. Click here for the full boxscore.

Brady and Gronkowski figured to be huge factors Sunday, and they were. But what made Sunday’s game another dominating win for the Patriots over the Texans was a mostly dominating and suffocating defense, holding Deshaun Watson and DeAndre Hopkins in check. Rex Burkhead was tripped up on 3rd-and-2 for no gain and the Patriots were forced to punt. Ryan Allen punted 54 yards to the Texans 1 with 43 seconds remaining. With Gronkowski playing prevent defense in the end zone, Watson’s Hail Mary fell short of the end zone and was knocked down by Jason McCourty to preserve the win.

The game had a much more nervous ending for Patriots fans than they expected midway through the third. Trailing 27-13 and facing fourth down near midfield, Bill O’Brien had his team punt away with 4:41 left. Riley McCarron muffed it at the Patriots 16. Two defensive holding plays later, the Texans finally punched it in on a Watson touchdown pass to Bruce Ellington, making it 27-20.

Unlike the 2017 opener when they were blown out in the second half and fell to Alex Smith and the Chiefs, the Patriots were locked and loaded against Watson, holding him in the pocket for most of the game and applying constant pressure from the defensive front.

The game started slowly for the Patriots offense. They went with three straight handoffs and failed to convert a first down.

But after the punt pinned the Texans at their 22, Deshaun Watson – in the shotgun – fumbled a handoff to running back Lamar Jackson. The ball fell to the turf and Dont’a Hightower recovered at the Texans 19.

The Patriots looked like they were about waste the opportunity for an easy six when two running plays and a false start by Joe Thuney put the Patriots in 3rd-and-12 at the Texans 21. But as has happened 75 times before, Brady dropped back and found Rob Gronkowski at the Texans 2. He steamrolled linebacker Zach Cunningham and safety Kareem Jackson and stomped his way inside the left pylon for the first touchdown of the season.

While the Patriots were able to turn their turnover into a touchdown, the Texans were not able to do likewise from the New England 17 when Tyrann Mathieu picked off a deflected Brady pass at the line intended for James White over the middle. As a matter of fact, the Patriots, thanks to pass rushing from Trey Flowers and Deatrich Wise, who combined for a third-down sack.

Adrian Clayborn was also big in helping to collapse the pocket. The Texans went backwards seven yards and settled for a 41-yard field goal.

The Texans lost their starting right tackle Seantrel Henderson to a left ankle injury and the Patriots took advantage of a line that was rebuilt in the offseason. The Patriots collapsed the pocket on nearly every Watson dropback in the pocket.

The Patriots scored the second touchdown in much more conventional fashion, marching 75 yards in 10 plays, capped off by a 12-yard pass from Brady to an uncovered James White in the right flat for the second New England score of the day.

The half ended in typical Patriots fashion. Jeremy Hill partially blocked a Trevor Daniel punt. The ball rolled to the Patriots 22 and that’s where Tom Brady took over with 1:28 left in the half. After runs of eight and 11 yards by Hill, Brady dropped back and fired deep over the middle for Gronkowski. The Patriots tight end lunged out and hauled the ball in, but not before the Texans appeared to swipe the ball away as Gronk tried to control the reception. Before the play could be reviewed inside the 2-minute warning and without the Texans calling a timeout, Brady raced down and called a play, a handoff to Rex Burkhead that the Patriots back fumbled. Chris Hogan recovered. Referee Tony Corrente had his mic open to the stadium and was heard yelling at protesting Texans “We ran a play before you came to me.”

Brady then picked on corner Kevin Johnson, targeting Phillip Dorsett on three straight passes for 30 yards, including the touchdown in the back of the end zone with 14 ticks left on the clock for a 21-6 halftime lead.

Gronkowski committed a rare turnover after a 25-yard completion on a seam route, when Kareem Jackson stripped Gronk at the Houston 44. Tyrann Mathieu recovered. But on the play, Jeremy Hill went down in a heap when he collided with James Develin. Hill could not leave under his own power and was ruled out almost immediately with a knee injury.

The Patriots forced the Texans to fourth-and-5 at the Patriots 17. Watson threw behind an open tight end Ryan Griffin in the end zone as the Patriots took over. Another perfect Brady seam laser to Gronk for 30 yards set up the Patriots in Houston territory. That drive was capped by a 39-yard Stephen Gostkowski field goal to make it 24-6.

The Patriots defense finally yielded a touchdown late in the third quarter when Watson led the Texans down the field in 10 plays, covering 68 yards, capped by Alfred Blue’s 1 yard run, making it 24-13 with 1:52 left in the third.