Jayson Tatum got frustrated with officials in the third quarter and it derailed Boston's offense, and Ime Udoka did not pull him until it was too late. 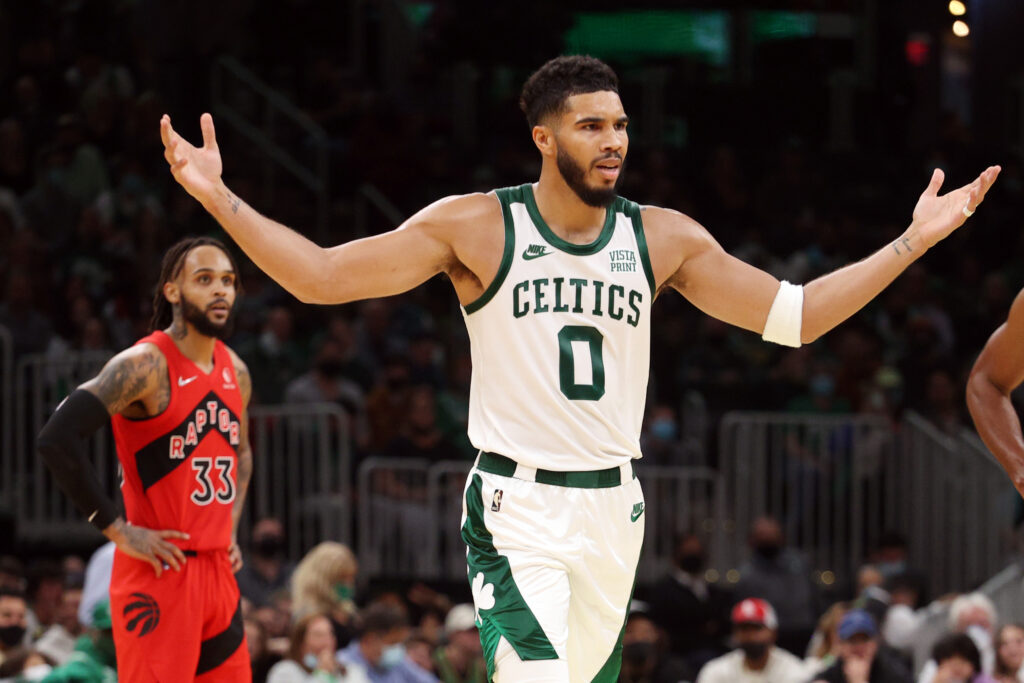 BOSTON, MASSACHUSETTS - OCTOBER 22: Jayson Tatum #0 of the Boston Celtics reacts after a foul is called against him during the Celtics home opener against the Toronto Raptors at TD Garden on October 22, 2021 in Boston, Massachusetts. NOTE TO USER: User expressly acknowledges and agrees that, by downloading and or using this photograph, User is consenting to the terms and conditions of the Getty Images License Agreement. (Photo by Maddie Meyer/Getty Images)
Share
Facebook Twitter Email

The exact scene Ime Udoka didn’t want to see from his Celtics played out with Boston trailing 59-51 on Friday. Jayson Tatum set a screen for Marcus Smart and clipped Fred VanVleet, drawing an offensive foul as the Raptors guard spilled to the floor. Last season’s Celtics returned to TD Garden moments later and an opening night crowd sent the team off the floor down 20 at the end of the third quarter to a roar of boos.

Tatum spiked the ball off the ground after the foul call, a move that drew him a technical in the past and did again Friday. Tatum and three Celtics surrounded the official at mid-court, while Udoka discussed with the other along the sideline. Whether because he agreed with Tatum on the call, the Celtics were trailing in a close game or due to star status — Tatum did not immediately go to the bench like Grant Williams did for doing something similar in preseason.

“I’m telling him to get back and stop worrying about the referee,” Udoka said then. “Your guy is bringing it up right behind you … you can’t get caught up with that. You gotta play through it just like they did. They played with pace when we cried about calls. They were running out and getting too many easy looks. It’s something that we’ve talked about in camp and I’m going to keep hammering away at it until we get to a place we want to be.”

The exact reason Udoka created a no-complaining policy in preseason, to maintain focus and build respect from officials, played out in the ensuing sequence that sunk Boston’s chance of staying in the game. The play galvanized Tatum for a moment, he crouched and extended his arms to stick with OG Anunoby to the rim and block his shot in one of his best defensive moments in recent memory.

Al Horford hit Grant for a running layup after finishing a three-point play in the lane on a hook shot the play before. Horford then blocked Anunoby at the three-point line and sent Tatum downhill in transition to find Jaylen Brown for an alley-oop slam to cut the deficit to 60-58. The pair of easy baskets, Horford thought, satisfied the Celtics too easily.

Then, the official obsession began again. Tatum broke into a drive past Scottie Barnes, spun away from VanVleet’s help and missed a wide layup attempt. He turned and flexed toward the official, and returned to defense slowly before Gary Trent Jr. hit him with an up-fake and finished past him in the lane.

A crowd of Barnes and Anunoby met Tatum on his fadeaway trying to exploit VanVleet and disrupted the shot on the next offensive possession. More staring at Brian Forte, the official followed. The Raptors returned to offense and Trent buried a bank shot long two over Horford’s head.

Boston held Toronto to 35% in the first half and piled up initial stops throughout. The Celtics want to turn those stops into easy fast breaks and have looked good doing it, but Horford added the team needs to run its offense in the half court too. Tatum and Udoka seemed too prone to let themselves attack head-on in mismatches, and too slow to react to collapses. That tunnel vision tightened amid frustration over calls. Last year’s Celtics also let officials get in their head and undermined their defense by allowing breakouts following bad shot attempts.

Tatum dove into the paint next time. Flailing his hip into Barnes, unloading a left-handed hook shot so high the ball hit the shot clock and dribbled out-of-bounds. He smiled and laughed across half court, turning around on defense and motioning toward his hip at the official.

The official simply stared, as did Udoka, until Trent walked the ball down the floor and turned the corner around a screen that drew Robert Williams III and Tatum up on the ball-handler in Trent who blew right by then for a floater and 10-point lead. Udoka finally called timeout.

That stretched defined Tatum’s night and the team’s defensive effort the rest of the way. Udoka kept him in the game and he over-helped off Trent, who hit a three following a kick-out pass. Then Tatum drove into a crowd of three Raptors and missed, with Dennis Schröder open on the right wing calling for the ball. As he stared at the official one last time, Barnes ran in the other direction and Tatum gave chase way too late. Barnes sidestepped Schröder to the layup line. 78-61.

This time, Brown subbed in for Tatum, and acknowledged after the game that not getting calls impacted his and the team’s defense:

“It’s something you got to work on,” Tatum said. “Like you said (it’s been a) year and a half. I don’t claim to be perfect at all. I’m far from it. I make mistakes all the time. I like to be held accountable by my teammates and myself, and you guys. I understand that’s the reoccurring thing that myself and other guys got to get better at. Easier said than done. I’m certain that anybody would tell you in the course of an NBA game that you care and playing hard and you get emotional. You might not mean to do those thinks, but emotions get the best of you sometimes. A lot of people that have played this sport at that level would, I think, second that. I’m not saying it makes it right, but stuff like that happens and I’ll be the first to say that I got to do better and I’m not perfect.”

Udoka wanted the Celtics to play through some calls and contrasted the effort against the New York game, pointing toward fatigue momentarily before saying it was no excuse. Tatum ultimately sat for about six minutes, slightly longer than he would’ve before returning for just over three minutes and making little progress on the 20-point deficit.

As Udoka seeks to create a culture of accountability and consistency, where anybody can be held to the fire, Tatum’s festering complaints spiraled into a blowout. It happened quickly, a two-point game becoming 10 then 20 within seven minutes. The initial technical gave Udoka chance to uphold his rule and send an early message to one of his stars regarding an area he’s trying to improve. With the cost of rolling with him being a loss anyway, Udoka missed that opportunity.

“It just started to happen,” Horford said. “Earlier, we were right there, we were right there, ‘oh we’re going to break through offensively,’ and we just never did. And i think that started to affect our defense. The biggest thing, for us, is to trust in our offense to actually run the sets, get the offense moving … the way that they play, they just clog in the paint … (we need to) try to find easy baskets.”