The Celtics have the unique opportunity to emerge as a frontrunner for Kevin Durant after he demanded a trade for the Nets, but should they? 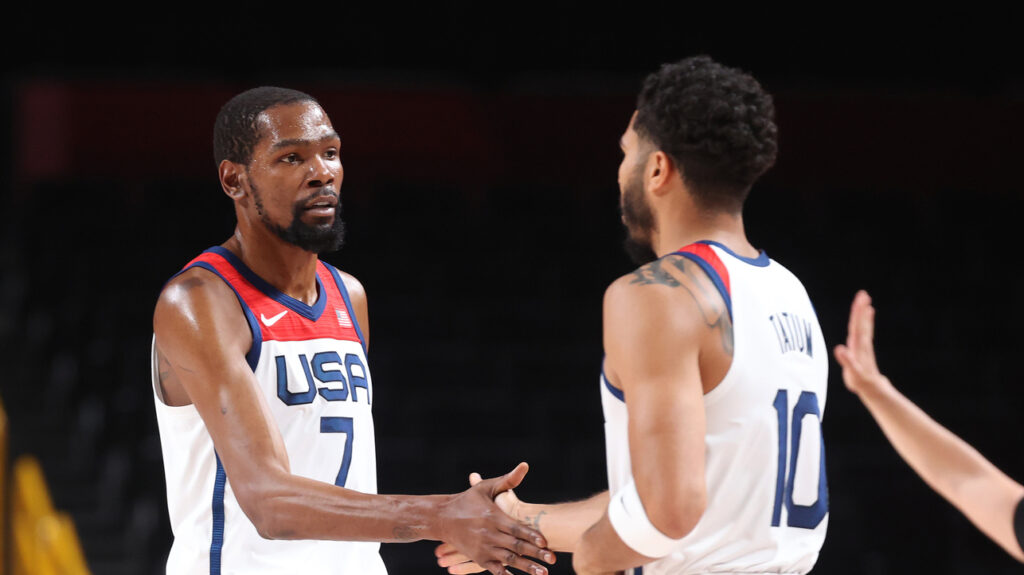 SAITAMA, JAPAN - JULY 28: Kevin Durant #7 and Jayson Tatum #10 of Team United States celebrates against Islamic Republic of Iran during the first half of a Men's Preliminary Round Group A game on day five of the Tokyo 2020 Olympic Games at Saitama Super Arena on July 28, 2021 in Saitama, Japan. (Photo by Gregory Shamus/Getty Images)
Share
Facebook Twitter Email

Kevin Durant rocked the basketball world on Wednesday hours ahead of the NBA free agency moratorium by requesting a trade from the Brooklyn Nets, as first reported by ESPN and confirmed through his agent by various outlets. Durant reportedly listed the Phoenix Suns and Miami Heat as his preferred destinations, but the entire NBA will inevitably pursue landing arguably the league’s top talent at the peak of his powers. Especially since he’s entering a four-year, $194.2-million extension he signed with Brooklyn last offseason.

That makes this an unprecedented circumstance, as Sean Marks and Nets leadership reportedly intend to accommodate the star, who chose them alongside Kyrie Irving in 2019. Brooklyn doesn’t have immediate urgency to move the star, due to his contract, and both Miami and Phoenix face hurdles in compensating the Nets to the historic degree they’ll need to. The Heat could try with Bam Adebayo, but Ben Simmons’ presence in Brooklyn makes those two ineligible to become teammates due to their status as designated rookie extension recipients. The Suns and Deandre Ayton could agree to a sign-and-trade that sends the restricted free agent to the Nets, but that would trigger a hard cap on Brooklyn they probably can’t slide under without involving a third team. Ayton’s salary would also reflect base year compensation.

Those restrictions open the door to other potential suitors like the Celtics since the Nets have some leverage regarding Durant’s destination. There’ll be an onus on Brooklyn pivoting toward its next steps to remain competitive soon, already trading a first-round pick for Royce O’Neale, then re-signing Patty Mills to a two-year, $14.5-million contract and Nic Claxton for two-years, $20-million. Irving probably needs to go soon too.

Ben Simmons will be 26 this season and is signed through 2024-25, while the Nets owe first-round picks and swaps to the Rockets through 2027 from the James Harden trade. The Nets want to recover a similar package of first-rounders alongside, reportedly, multiple all-star players. Boston could offer those picks, Jaylen Brown and another starter, whether Marcus Smart or Robert Williams III in a significant overhaul of their NBA Finals core. Should they?

Brad Stevens opened the offseason emphasizing the identity, defensive mindset and fragile nature of the successful team they built, previewing a summer where the team wouldn’t rock the boat significantly to improve. Durant could change that, though no reports have linked either side to each other, the Celtics have an opportunity to move into lead position for a potential deal while other teams try to navigate their way to a deal.

Last season, Durant stood alone atop the league as he carried the Nets through Irving’s absence and Harden’s struggles. Durant averaged 29.3 points, 7.4 rebounds and 5.8 assists per game on 52% shooting and a 37.2% mark from three. Then, he sprained his MCL, missing 21 games before returning and finishing the season strong enough to make the All-NBA Second Team by averaging 29.9 PPG at 33-years-old. That production fell in line with some of his best seasons.

For those who enjoy the DARKO trajectories. Jayson Tatum has a chance to have a better career than Kevin Durant. Less likely for Jaylen Brown, but the question isn’t then at the same age. It’s Brown at 25 vs. Durant at 33. Chance Brown could surpass that level soon, but how soon? pic.twitter.com/NMjKcuUH7j

The Celtics would gain championship pedigree, size, edge and skill, Durant considered by most either the best or second best player in the NBA after tearing his achilles in 2019. They’d lose, in Brown and Williams III, athleticism, core components of the team’s historic defense and all the upside multiple stars under 26-years-old carry. Boston established something in 2022, and transitioning to Durant alongside Jayson Tatum would require some level of adjustment. Then there’s the fit, would Durant move off-ball more? That wasn’t a problem when Harden and Durant joined forces, Durant drilling 44.5% of his catch-and-shoot threes in 2020-21.

Durant struggled in the first round against Boston’s dominant, swarming defense in uncharacteristic fashion, shooting 38.6% from the field and 33.3% from three, with 5.3 turnovers per game in four straight losses. The fear would be that Durant showed signs of an inevitable decline, one that may set in sooner than for his contemporaries due to his seven-foot stature and load he carried throughout his Brooklyn tenure. Hope would come in his ability to offload some of that responsibility to Tatum, with playmakers like Marcus Smart, Derrick White and Tatum to set him up, while Al Horford’s presence at the five would allow him to play less five. Durant and Tatum’s similar games could open the door to some mentorship, the pair already shining as the top two teammates on the gold medal Tokyo Olympic team last summer, while Durant’s edge could complement Tatum’s easygoing demeanor on the court effectively. There are, of course, elements of Durant’s persona that Tatum wouldn’t want to borrow from in terms of handling outside criticism.

The Celtics will need to weigh Tatum’s desire to take such a leap to team up with Durant, whether it benefits or hurts his long-term standing with the team. Any input he provides would make a decision easier, Tatum already posting production and achievements in line with Durant’s from this stage of his career and his whims should take priority over any other consideration. Brown’s production falls short of Durant’s at the same stage of their careers, but the question becomes Brown at 26 compared to Durant at 34.

Durant scores far more efficiently, and would add a new layer to Boston’s offense as the league’s most efficient mid-range scorer alongside Demar DeRozan. If Durant tailored his game toward more threes, (7.1 threes per 100 possessions compared to Brown’s 10.4), he’d expand his offensive edge over Brown. Brown, who shot 63.5% at the rim during a hot postseason still fell short of Durant’s regular season production there — 66.7%. Durant also produced nearly three more free throws attempts per game, while converting 91% to Brown’s 75.8%. Despite his defensive declines, Durant’s size, length and versatility on the defensive end probably surpasses Brown’s overall impact on that end, including a 19.6-16.7 DREB% edge, but the gap is thin. Durant’s defensive decline showed as much as any other in the first round.

Trading Brown for Durant straight-up would be more appealing than what the package would inevitably become, including one or both of the Celtics’ defensive anchors in Smart and Williams III. The Nets would probably demand three first-round picks and three pick swaps through 2029, effectively narrowing Boston’s window to the next several seasons while already knowing Durant’s intentions could change on a whim. The most difficult tradeoffs would be the value of one or two runs as sure-fired favorites for banner 18 compared to as long as one decade of being in the mix, but possibly falling just short. There isn’t a correct choice right now, but the Celtics showed the potential of their home-grown core in 2022. Whether or not it can grow more will decide which.

Contractually, Durant makes $43-million this season, with Brown locked in a $26.7-million before his contract year in 2023-24. Their salaries fall $8-million apart from matching in a trade, so the Celtics would have to bridge that gap some way or another. They may end up watching closely seeing if the Nets have a difficult enough time finding a centerpiece from another team that the prospect of Brown and salary filler, along with the picks, amounts to the best package available if pressure mounts to move Durant before addressing Irving’s future.

The Suns can currently offer Mikal Bridges ($21M) and Cam Johnson ($5.9M), needing to add $8-million of their own, probably by adding Jae Crowder. It’s not a tremendous package alongside Phoenix’ future first-round picks. The Heat’s might be worse, Kyle Lowry, Duncan Robinson and Tyler Herro making up the majority of their salary outside of Jimmy Butler and Adebayo. They could ask for Devin Booker, unlikely to begin with before considering his new Rose Rule contract disqualifying him from joining Simmons in Brooklyn. The Nets would have a difficult time rerouting Simmons after a lost season to physical and mental concerns, possibly needing to take back someone like Rudy Gobert or Russell Westbrook to do so.

Ayton’s free agent status complicates any chance of him going to Brooklyn in the deal. He’s commanding as much as $30.9-million and the Nets already sit above the hard cap line ($157M) at $161-million, it’d take drastic maneuvering, such as moving Simmons, Joe Harris or Seth Curry, to wiggle below that line. Sending Simmons to Phoenix alongside Durant isn’t an option since the Nets have an incentive to keep winning without their own picks. Hemorrhaging more talent to trade Durant for Ayton doesn’t make sense.

The Nets could demand more enticing packages from teams like the Celtics, Raptors (Scottie Barnes), Cavaliers (Evan Mobley) or the Grizzlies’ mass of young talent centered around Desmond Bane (note: Jaren Jackson Jr. underwent surgery on his foot this month). The door remains open for the Celtics to rise above those suitors.

As young and encouraging as the Celtics’ core is, you have to consider a monumental talent like Durant bolstering Tatum and a relatively deep roster around him into a force. Durant already played under Ime Udoka in Brooklyn and could bring other free agents with him to fill the gaps anything the Celtics send out create. Could T.J. Warren or Marcus Morris make a Brown loss more palatable alongside Durant and Tatum? Horford already showed, with some help from Grant Williams and another depth big addition, how much he can provide in Williams III’s place inside. Smart on top of the other two is probably when the losses become too much.

Durant provides a unique opportunity the Celtics haven’t received since they landed Kevin Garnett in 2008. That move landed one title, somewhat disappointingly, but no less celebrated in Boston 14 years later. Brown’s ascent, and even future with the Celtics aren’t promised, nor is a return to the Finals over the two years he’s under contract. If Boston stands pat, they’ll benefit from the disintegration of the Brooklyn core alone, and could become facilitators or add players who break lose from a trade, whether it be Bruce Brown, Johnson, Harris or Curry.

They’ve developed an incredible core and Brown’s name coming up to potentially allow the team to land one of the 10-15 best players in NBA history isn’t an insult. It’s a credit to how envied and valuable he’s become as a player since entering the league. Now, it’s a matter of debating whose next two seasons look more bright. Do you stay young, athletic and promising, or pivot toward pedigree, hoping it bolsters Tatum’s own promise. Your call.