Marcus Smart didn't look like himself early this season. Sickness explains some of it, but he also needs to sharpen his decision-making. 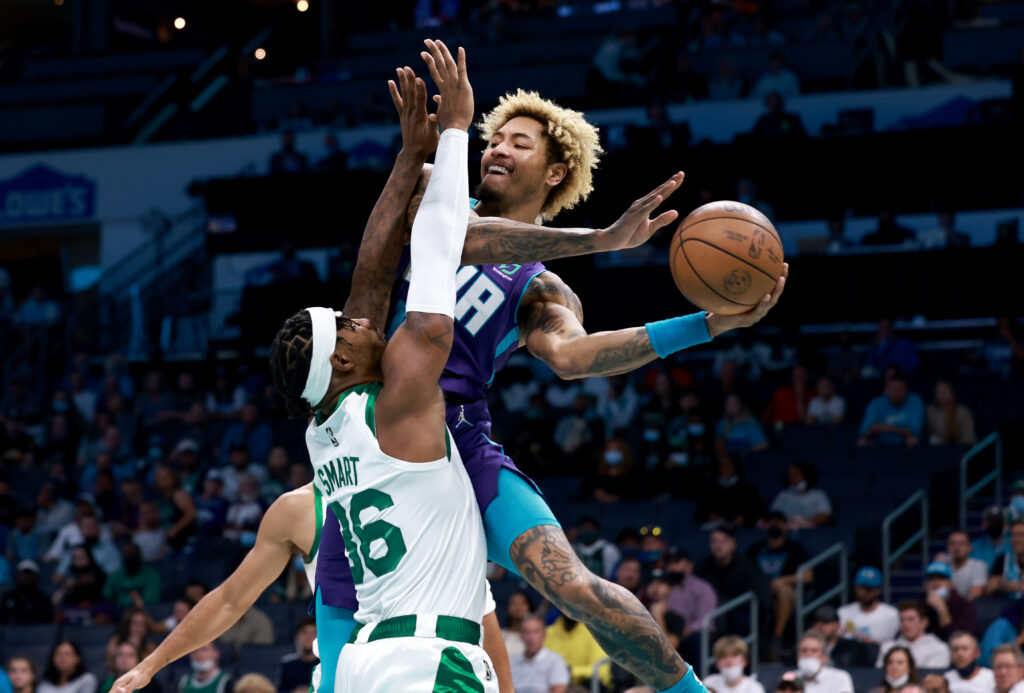 CHARLOTTE, NORTH CAROLINA - OCTOBER 25: Kelly Oubre Jr. #12 of the Charlotte Hornets drives against Marcus Smart #36 of the Boston Celtics during the first half of their game at Spectrum Center on October 25, 2021 in Charlotte, North Carolina. NOTE TO USER: User expressly acknowledges and agrees that, by downloading and/or using this Photograph, user is consenting to the terms and conditions of the Getty Images License Agreement. (Photo by Grant Halverson/Getty Images)
Share
Facebook Twitter Email

Marcus Smart played so poorly through the first half against the Hornets, the alarm began to ring on the early portion of his first season as full-time Celtics point guard. He tossed aimless passes into traffic and launched more threes that didn’t come close to landing, while failing to penetrate the interior.

Without an appearance on the injury report, it gave no indication anything above the surface was wrong. So was it beneath? Smart discussed personal challenges throughout the 2021 campaign and looked nothing like himself after receiving a four-year extension last offseason.

It turned out sickness undermined his first week, particularly migraine, along with some knee pain.

Dennis Schröder moved into the starting lineup alongside Smart and took on some playmaking duties over the last two games, with Smart shooting 27.5% from the field and 24.1% from three. Smart posted net-neutral 99.6 offensive and defensive ratings entering Charlotte, and privately wondered if he’d play upon arrival, waking and throwing up, before his vision blurred and the headaches he battled all week plagued him again. He downed water and a banana, suited up, and struggled again at first, before a string of blocks, steals and hustle plays helped build Boston toward an 18-7 overtime win.

“When I was younger, I always used to be told if you gonna to get out there and play, you can’t make excuses,” Smart said. “You gotta go out there and do it. I chose to play, instead of sitting out. It wasn’t pretty, but not every game’s going to be pretty. You’ve got to go find a way.”

Smart still needs to sort things out on offense, where nothing’s been pretty. If he can’t create at a high rate, he needs to at least limit turnovers and find spots on the floor to occasionally score from aside from threes. Injuries revealed an intriguing pairing with Schröder, who can take the offensive load off Smart and match his intensity on defense. Smart fell to a 1-for-15 streak from three at his worst, subbing out after six minutes with Boston trailing 17-12. Schröder asserted himself on offense in the meantime.

He returned early in the second to set Jayson Tatum up for a fadeaway make and find Jabari Parker on the roll to finish through Gordon Hayward. Smart then buried a pair of short jumpers and threw a puzzling pass into traffic looking for Williams III. LaMelo Ball ran away with the turnover and hit a pull-up three.

Smart went on to swing to a pass without looking to his right, not seeing Hayward cutting off the lane and similarly flipped a pass around his back in Houston off Tatum to his left that bounced to the Rockets. During the Raptors loss, he launched a pass over Al Horford’s head and drove himself into no-man’s land before dumping off the ball to Fred VanVleet.

Migraines may explain Smart’s early-season motor. The live-ball nature and disconnectedness of Smart’s turnovers, more than the sheer number of them, undermined his point guard play and proved more concerning.

While he has been an effective ball mover on the wing, making extra passes and whipping the ball around, Smart hasn’t made himself a threat. Part of that stems from his lack of dribble penetration. He’s hit two shots in the restricted area in four games and is 4-of-11 (36.4%) from two and heavily relied on his three-point shot. Only the first four games of his career (23.8%) featured a worse four-game start to a season from three by Smart. He recovered in that year and 2018-19 to shoot in the low-to-mid 30s. He never returned from a 25% start in 2015-16.

The shooting wouldn’t matter as much with evidence of Smart’s typical rangy defensive heroics. Only a slide to the corner for a loose ball in the Toronto game resembled the old, active heart-and-soul Smart prior to halftime on Monday.

That player finally reappeared in the second half, even if his offensive struggles continued, starting when Ball sticking a step-back three over him to break a 75-75 tie and flashing a three-point sign toward him. Then Ball tossed a quarterback-style pass over the top of Boston’s defense for a Hayward touchdown. It turned out Smart needed instigation as much as H20.

“It happened. I’m a defender. Just like a shot-blocker, you’re going to get dunked on a few times,” Smart said. “I mean all he did was make a good move, stop, and I just I stopped and he kept going. Like I said, I was out there struggling … but as we know, the player I am, Imma make up for it and I did it twice. We came out with the win, and that’s all that matters. He’s going to get all the Overtime, House of Highlights, SportsCenter and all that, and we got the win.”

Smart bounced back with a block and rebound on a Charlotte put-back attempt. His pull-up three attempt and swing pass that sent Hayward running for two continued his inconsistency, only flashing an assist with an entry feed to Grant Williams for a short pull-up in the third. He returned, fronting Nick Richards in the post and forcing a turnover, then finally landing a catch-and-shoot three from Tatum to keep Boston within five with four minutes remaining.

A vintage Smart strip of Hayward sent Schröder running for what should’ve been a layup to get within one point two possessions later. Tatum got called for basket interference on the follow. Still, it marked progress. Just like the game as a whole. Ime Udoka called this opening stretch an extended preseason last week.

Smart heaved his rebound following Schröder’s block on Miles Bridges out to Brown for an open dunk to get within three again. After Tatum created six straight points to tie the game at 122, Smart and he flashed a two-man game Charlotte narrowly stopped, funneling the ball back to Smart for a go-ahead three he needed to take and missed. He made up for it with a steal of Hayward’s in-bounds that could’ve set up a Boston win in regulation.

“In the fourth quarter, we ramped up the pressure a little bit and I think we cut the lead down in a matter of minutes,” Brown said. “Different group, we got a lot of resilient guys, Dennis played well. Marcus Smart was terrific by the way, especially at the end of the game. He might not get credit for having a great game, but I think defensively he won that game for us … we’re looking forward to empowering (Schröder) and Smart and getting after it on the defensive end. I think we can really be a good team.”

Schröder went on to score nine points in overtime and feed Brown for the decisive assist. The duo posted a +4.5 net rating through their first 92 minutes, with a poor shooting track record and sub-100 defensive rating. Mix in Brown, Tatum and Williams III and the unit boasts a +16.5 net rating, with a 64.7 assist percentage. The shooting stinks, Charlotte backed off the guard duo, but Smart’s secondary playmaking. Schröder’s scoring ability and the pair’s defensive energy empowered each other, and accentuated the stars. Spot shooting games like Schröder’s 4-for-9 have overcome the team’s lack of shooting personnel on paper. He should continue to start.

Smart’s offense will need to adapt. He’s shooting more threes per game than ever before and not generating enough quality post looks to thrive in the point guard role. Playmaking can be outsourced to Tatum, Schröder and the bigs, but even Smart at his craftiest will need to find his role on offense. He statistically remains a defensive ceiling-raiser and a cog in Udoka’s switching system who needs nightly inspiration.

“He’s one of the top perimeter defenders in the league,” Udoka told CLNS in New York. “He plays with an edge and chip and competitiveness and he’s using (the All-Defense snub) as motivation for sure. Just getting back to who he is. He’s going to be himself, and he’s going to guard a certain way, physical. I think some of the things we’re doing defensively will benefit him. He’s another guy like Grant and Jaylen and Jayson who can guard multiple positions. He has a chip on his shoulder like he always does and I think that’ll only be added motivation for him.”