Bengals captains believe team is in the right collective 'head space' for 2nd half playoff run. 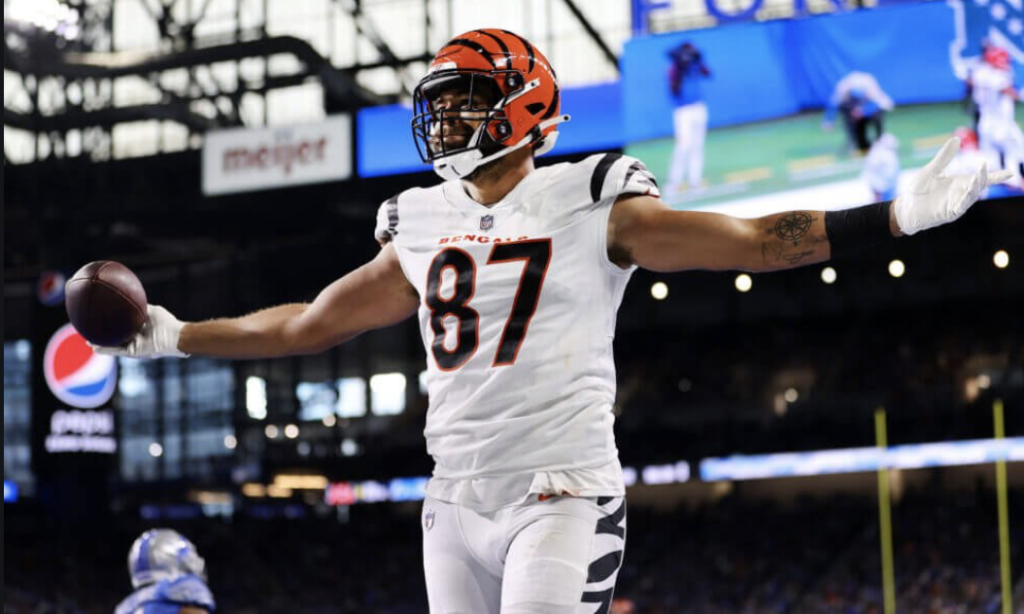 Those famous words from Sun Tzu in the “Art of War” describe competition in its most basic form. Be prepared physically and mentally for the battle ahead.

If there’s one player on the Bengals most inclined to heed words of inspiration and preparation, it’s C.J. Uzomah. He is always looking for that edge to help himself and teammates to handle the stress of competing in the NFL.

Before heading out on the bye, he passed along his words of wisdom with rookie Ja’Marr Chase about everyone taking responsibility and accountability for the loss to the Browns in Week 9.

This week, he informed all of us that he spent time on helping himself remain in the moment, whether it’s at home relaxing and enjoying others battle in the NFL or envisioning himself back on the field helping Joe Burrow and the offense regain their mojo.

“Watching games this Sunday and seeing how certain players and tight ends do certain things, I don’t know I had a mental battle with myself in watching games on Thursday and Sunday. A lot of visualization went into this weekend,” Uzomah said. “I worked on some things mentally with breathing and I’m excited to see how that unfolds for me personally and telling some of the guys about and see if it helps them, too.”

Battles won in the mind beforehand are often followed by battles won on the field.

“I’m huge into visualization and taking a moment to be at ease with yourself,” Uzomah said. “Thinking about you making a play, the early calls that we have. I like thinking about those while I’m going to sleep. Closing my eyes and just envisioning what they could be and what defense they could be in. As the game progresses, you don’t have those early calls. You’re 10 plays deep into your third-and-shorts and your seven plays deep into your red zone packages.

“Going through those and I was just closing my eyes and focusing on taking deep breaths and thinking about certain plays that we’ve run already and going through film that way. I think it helps. There’s this story I heard about a man who was in prison and the first thing he said he wanted to do is go to a specific golf course. He said he just thought about it and envisioned making a hole in one. The first thing he did was go to the golf course and it was like the 15th hole or something and he made a hole in one. The brain is powerful.”

But to put the brain to its most efficient use, it must be uncluttered, cleaned of noise or distractions from the outside. It is prudent to be concerned with one’s own financial standing and future but not if it detracts or distracts from the group’s goal of winning. Just ask safety Jessie Bates III, who was unsuccessful in landing a new deal like Sam Hubbard’s in training camp.

“I think the biggest thing throughout this stretch is to really focus on the moment,” Bates said. “Be in the now and that’s just talking obviously everything. Just be in the moment, know where your feet are and don’t worry about the future as much.”

Bates’ biggest play in the first half was helping Germaine Pratt force a Dalvin Cook fumble late in overtime that turned a certain loss into a dramatic victory and changed the tone of the first half for the Bengals. But after that, his numbers in terms of pass breakups, interceptions, tackles and forced fumbles fell significantly in comparison with past seasons. He had the one interception against the Jets that was a yard shy of a pick-6. That was his only pass defended in the first nine games and he has yet to record a sack.

“I think it kind of goes into everything. I feel like I’m at a better head space now than I was at the beginning of the season. So caught on to proving the wrong people right and the main thing I should be focusing on is proving the right people right as far as my coaches, my teammates, my family and not worry about all of the other stuff. I know that’s going to work out, I know what type of player I am, that stuff’s going to work out regardless, but like I said I gotta be better for this team so I’m excited for it.”

Then there’s the physical aspect. It’s long been believed that those teams that exert their will through the ground game eventually come out on top late in the season, like December and January. Uzomah is a believer.

“One hundred percent,” Uzomah told me. “Cold weather games, that’s what I think about when I think about playing football. December, frigid. Snow. Absolutely demolishing one another up front. Receivers blocking downfield. Springing a long 50-yard run and going back to the ground and getting three, four, five yards a carry. Springing another one. That’s demoralizing for a team to watch that happen.

Burrow sees what the Vikings defense is giving with another hard count. He audibles out of the run call to Y leak. Joe throws the perfect pass to Uzomah to set up the game winning field goal. The BALLS. pic.twitter.com/lq3VJMvpMJ

Winning is an attitude and Uzomah is determined the Bengals find the right (collective) one for the job.

“I’m hoping that my presence in the locker room helps and the veteran leadership I have kind of helps out with that. I said this before we left, the stress level wasn’t there. There’s no panic, right. The urgency is there. We know that we have not played the way we want to play and so there is a sense of urgency that we need to get our crap together, right? But being able to watch these games, we’re like, ‘Wow! This is falling on us.’ It’s going to come down to what we do against who we play. We have seven games (against AFC opponents) and we’re going to be able to control our own fate and our own destiny, and we play in our division again three times.

“Being able to watch these games unfold (Sunday) was like, ‘Wow, what we’re speaking is not a lie.’ It’s not like, ‘Hey, we’re going to say this to the press and hopefully it comes to fruition.’ It’s what we believe, and with how this week’s unfolded, I think it holds more weight than what we said last week. We’re excited. We’re excited. We had that bye. People (here) are excited to be able to spend time away from football for a little bit, watch football on their own, do whatever they needed to do, get their mentality.”

“We’re pumped to be back. I got back in the huddle, started dapping guys up and said, ‘Damn, I missed you guys!’ That’s the first thing I said. It’s unique. This locker room, this culture is unique. You’re talking we haven’t been in a race in prior years. That’s why this year is different. That’s why this team is different, this locker room and culture is completely different.”

His head coach used fewer words to sum up what the Bengals have in front of them in the final eight weeks.

“That’s the message that things are not going to get easier; they are going to get harder these last eight games,” Zac Taylor said. “About everybody in the league right now is 5-4 or 5-5. We’re right there in the middle of it and so we’ve just got take care of business on the road this week in Las Vegas.”