Six Minutes To Glory: How One Remarkable Division-Clinching Win Changes Narrative On Bengals

Bengals rally past Chiefs in epic win that gives franchise real hope that a division title is just a start. 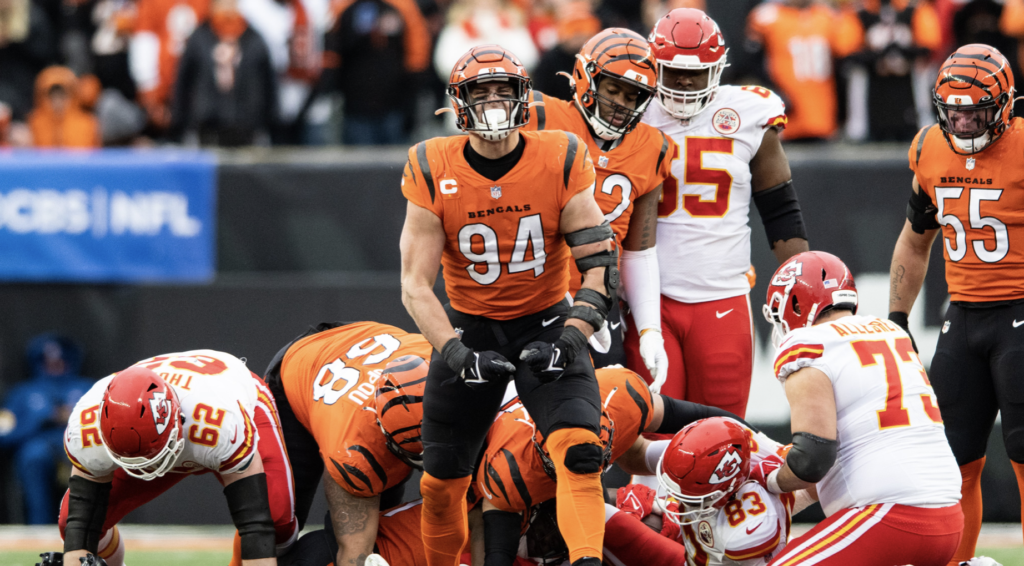 CINCINNATI – Let’s all appreciate what we witnessed Sunday at Paul Brown Stadium.

The Cincinnati Bengals trailed the Kansas City Chiefs three times by 14 points and showed little capability of slowing the most dynamic and explosive quarterback in the NFL. They were hanging by a thread, with the likely need to win in Cleveland next week to reach the playoffs.

They were playing for the chance to win the AFC North for the first time since 2015 but had to beat the two-time defending AFC Champion by somehow slowing Tyreek Hill, Mecole Hardman, Travis Kelce and a tight end named Blake Bell.

When the Bengals fell behind 28-14 Sunday, it sure didn’t feel like this was going to be the day Cincinnati would clinch its tenth division title in franchise history. Far from it.

But what we saw in the second half from this Bengals team is precisely what should give every fan reasonable hope they can wind up in Los Angeles on Feb. 13 playing for a chance to win their first Super Bowl. It wasn’t just the 266 yards and three touchdowns from Ja’Marr Chase.

Ja'Marr Chase knows #Bengals might get a second chance at KC. So Patrick Mahomes. #RuleTheJungle pic.twitter.com/k5IGlXJ0IV

It wasn’t only 30-of-39 from Joe Burrow for 446 yards and four TDs. It goes beyond the Madden numbers the Bengals offense put up.

The Bengals somehow found a way to hold the Chiefs to three points in the second half and killed the final six minutes before Evan McPherson’s 20-yard chip shot on the game’s final play sent Bengals players racing out onto the field and the Chiefs headed to the locker room in near disbelief of Cincinnati’s 34-31 win that clinched the 2021 AFC North title.

An emotional Zac Taylor can barely put in words what this division-clinching win means #Bengals pic.twitter.com/zSwsMEgCss

“You guys have sat in here and seen what we’ve been through,” Taylor replied.

And what the fans went through in the final six minutes.

It was part brilliance, part madness and part hysteria. It was everything in a nutshell this franchise, its loyal base and its head coach has been through over the last three years.

“He gets an incredible amount of credit,” Sam Hubbard said. “Anytime something goes wrong or there’s an issue, it seems like people are calling for Zac’s job or whatever. He’s done nothing but be a great leader and consistent force in this whole turnaround, and I really love Zac as a coach, and I’m thankful that he’s here.

“He was young. We’re all young, we all grow and learn, and we all just wanted to be better, and it’s just a consistent effort to be better for this team. It’s what we’ve all done, and done together.”

The way the Bengals played in the final 30 minutes of this game against one of the very best in the game shows you why they love playing for their coach and their quarterback.

Starting with the third-and-27 at the Chiefs 41 following a Joe Burrow sack by Chris Jones, the Bengals rode a tidal wave of emotion that bordered on surreal. Burrow, facing a desperate situation and knowing there was still over three minutes left in a 31-31 game, wanted no part of giving the ball back to Patrick Mahomes. So, as he was facing another jail-break and about to get pounded, Burrow had a decision to make.

Well, on a day in which Ja’Marr Chase caught everything in his direction for a franchise-record 266 yards, that’s a silly and unnecessary question. What do you think Burrow was going to do?

“Everyone knows that meme. Eff it,” Burrow told me. “Ja’Marr’s down there somewhere, I’m gonna just throw it up to him and he’s gonna make a play.”

Joe Burrow on Ja'Marr Chase : "Everyone knows that meme. 'F it. Ja'Marr's down there somewhere.'"
? pic.twitter.com/rFgVLsc4ku

Joe, truer words never spoken, at least on this day. The 30-yard completion was the 11th and final on the day for Chase, who totaled an incredible 266 yards, and put the Bengals in business at the Chiefs 11.

Then the game took a surreal turn.

Mixon for five. Mixon for four. Mixon for one and a first down. Two minutes to go and the Bengals had another critical decision to make. How to get in the end zone and not settle for three with Mahomes on the other side.

Two quarterback sneaks yielded nada. And on top of it, Burrow got reaggravated a right knee issue on one of the sneaks, just like Mahomes did two years ago that forced him to miss several games in a run to a Super Bowl. Third and goal, Mixon got nothing on a run up the middle. Uh oh, this really couldn’t be happening.

Fourth and goal and Burrow decide to roll to his right and facing pressure, throws to Mixon who can’t get in. But alas, the Bengals called for holding on Jackson Carman, the Chiefs called for defensive holding, replay fourth down. Surely, Zac Taylor would send the field goal unit on with now 50 seconds left.

Joe Burrow flushed out again, throws incomplete to Tyler Boyd. But L’Jarius Sneed, he of the pass interference and unnecessary roughness the previous drive that gave Cincinnati a 31-28 lead, was called for illegal use of hands in the end zone.

With Burrow realizing KC was out of timeouts and his knee starting to bark at him, he pulled himself out and had Brandon Allen snap twice to get the clock to :02.

McPherson kicked his third game-winning field goal of the season in which time expired on his kick and the Bengals had their first AFC North title in six seasons. Six seasons that feel like a lifetime ago.

The moment we won the AFC North. ⤵

What the Bengals went through in that final six minutes neatly summarizes everything the Bengals have experienced in the last 20 years. From Carson Palmer’s knee, to the botched extra point in the snow in Denver, to Santonio Holmes down the sideline, to Rex Ryan in the playoffs, to Andy Dalton going ice cold against the Chargers to Jeremy Hill to Antonio Brown (shirt on) over the middle.

All of those moments, the highs leading to crushing lows, all neatly wrapped in six minutes of edge-of-your-seat drama for the 64,505 at Paul Brown Stadium.

“We’ve gotten to this point so many times and failed to capitalize, and that’s kind of the narrative that’s been the Cincinnati Bengals,” Hubbard said. “To get an opportunity to clinch the division and actually take advantage of it and have this momentum going into the playoffs, it’s something that’s uncharacteristic of the Bengals, and it signifies what we’ve been talking about for awhile — about how things are changing and the direction we’re heading as a franchise and as a team, so it’s really special.”

Hubbard was part of a defense that helped hold Patrick Mahomes to 259 yards passing and two touchdowns.

“Early in my career, I had someone tell me that it’s tough to win in this league, and the only thing you can do is not let it (losing) affect you,” Hubbard said. “So (during) the years of losing, I just focused on not letting it change me and how I go about my business, and what I did to get me to winning programs and winning championships in the past, and have the faith in the front office, the coaches, the guys in here, the scheme.

“One day, it would eventually flip, and I would just try to be a consistent force in how I went about my business. Getting this feeling today, it’s just really amazing.”

And Hubbard was told that this means a lot to the people at the top.

“I just had one of the people involved in the organization tell me how happy Mike Brown was, that he was on the verge of tears, and that’s just a really special feeling because this really is a great, family-run organization,” Hubbard said. “They take care of us. To get this win for the city and this team, it means a lot.”

This time, the ending was different. The promise for this January feels different.

“We’ll believe in anything,” Taylor told me. “We’ve always felt like we can play with any team in this league, and the Chiefs have been the standard. They have — and they’re still the standard. They’ve done it with consistency.

“And we’ve won a big game here, but we’ve got to prove that we can do it consistently. And starting with next week, it continues to be a playoff mindset for us, and we’ve got to continue to prove ourselves. Again, it’s not going to be easy, but our guys are going to step up to the challenge.”